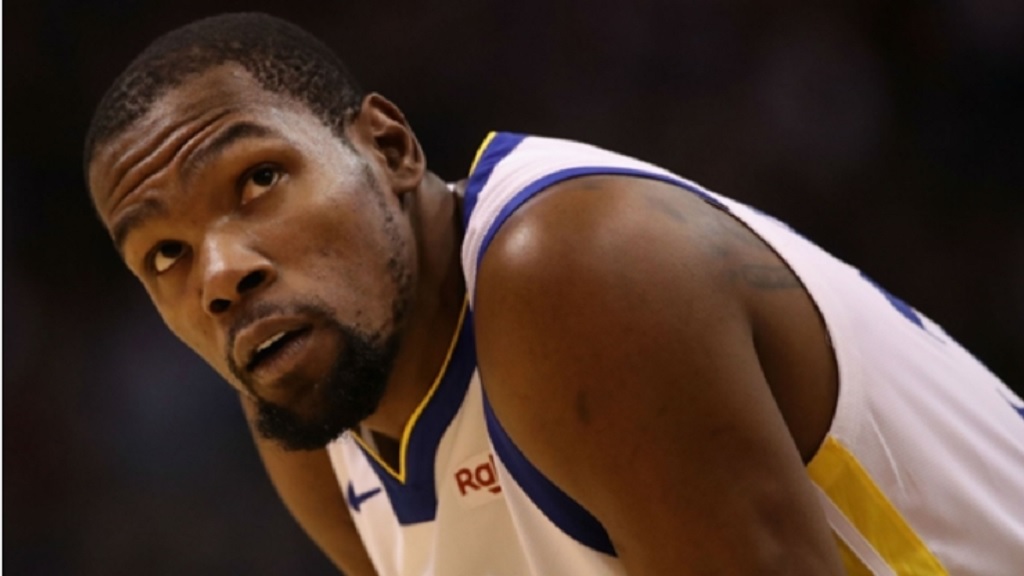 Kevin Durant on duty for the Golden State Warriors.

A grieving Kevin Durant inspired reigning NBA champions the Golden State Warriors to a 112-89 victory against the Indiana Pacers.

On the same day his childhood friend Cliff Dixon was shot to death in Atlanta, Durant posted 15 points and tallied six assists.

DeMarcus Cousins returned from an ankle injury scored put up 19 points and 1 rebound, while Andrew Bogut – in his second spell with the Warriors after winning the 2015 championship – received a standing ovation in his first game back in Oakland.

The Pacers, who missed another chance to clinch a playoff spot, were led by Tyreke Evans' 20 points off the bench.

Donovan Mitchell scored a game-high 34 points but the Utah Jazz still lost 117-114 to the Atlanta Hawks.

In the final moments, Mitchell missed a 22-foot three-point shot that would have tied the contest with 1.8 seconds remaining as the Hawks snapped the Jazz's five-game winning streak.

Trae Young led Atlanta's efforts with 23 points and 11 assists in a double-double display.

Kemba Walker led the Charlotte Hornets to a 113-106 win over the Minnesota Timberwolves with a game-high 31 points. Walker was 10 of 22 from the field and made just one of his eight three-point attempts.

The Washington Wizards lost 113-108 against the Denver Nuggets, but Bradley Beal finished with a game-high 25 points. On Denver's side, five players led with 15 points each.

The Detroit Pistons defeated the Phoenix Suns 118-98 thanks to Wayne Ellington's with 23 points.

The Timberwolves starting five all scored in the double-digits, but they needed some help from their bench, which never came. There was only one player to score 10 or more points in Gorgui Dieng while the rest of the subs struggled. Keita Bates-Diop and Jerryd Bayless scored just two points each.

Maximilian Kleber tallied just five points in the Dallas Mavericks' 116-100 defeat to the Sacramento Kings. He finished minus-21.

The Nuggets held off the Wizards after entering the fourth quarter tied at 85-85, as Malik Beasley found Mason Plumlee near the rim.

The Oklahoma City Thunder are holding on to their eighth seed with a comfortable gap between the Western Conference teams that are still trying to revive their seasons. But the Thunder have lost their stride as of late and will take a four-game losing skid to Toronto when they face the Raptors on Friday. The second-ranked team in the east have put together back-to-back wins but will be without All-Star guard Kyle Lowry, who will miss his second consecutive game due to a sprained right ankle.

Durant tells media to 'grow up' over free agency rumours