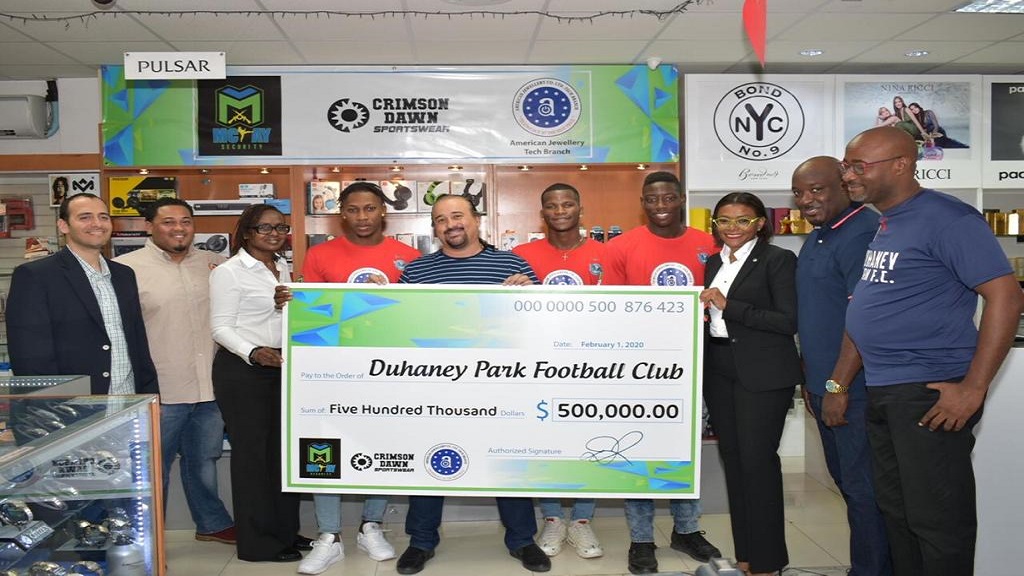 The senior men’s team at Duhaney Park Football Club, an affiliate of the Kingston and St Andrew Football Association (KSAFA), got a three-in-one sponsorship combo to strengthen its participation in this season’s Major League competition.

McKay Security, American Jewellery and long-time sport gear manufacturers, Crimson Dawn, teamed up to make a $500,000 donation to the club. The sponsorship announcement came on Monday at American Jewellers in Mall Plaza on Constant Spring Road in Kingston.

Company Director, Raj Khemlani, Director, highlighted that American Jewellery, which has been in business for over 40 years, recently opened its tech branch and realised one of the most effective means of promoting this new business was through football.

“Ironically, Jason McKay from McKay Security recently approached us and proposed the most suitable promotion model that will not only promote our new branch but allow us to invest in the future of Jamaica; the next generation. And what better way to do so than with one of our people's favourite past time – football,” said Khelmani.

“The Duhaney Park Football Club has been in operation since 1966. It is a community-based sport with an objective to reduce the crime being experienced in the community and improve the mindset of its youngsters through football,” Khemlani continued. “This is an effort we were impressed with and knew we had to be involved. From a marketing point of view, this union will be a sure goal as it benefits both objectives for the American Jewellery Tech Branch.”

He noted that Crimson Dawn has been in operation here for over 45 years and reinforced that this commitment is an assist in “… helping to build on the foundation where we’re coming from, which is the youth of Jamaica and sports in Jamaica."

Rhoden added: “I want to encourage Duhaney Park Football Club and the youth of the team to continue to progress, be ambassadors for the community and go out there, do well, represent yourself, your community and Jamaica well.”

McKay Security has been involved in sport sponsorship for quite some time, primarily through the St Catherine Football Association and with martial arts at the national and high school level. Denise Romero, the company’s Executive Marketing and Client Services Manager, said they have been “observing the Duhaney Park Football Club for some time and … they are indeed a true example of development in the sport and more importantly, a beacon for the Duhaney Park community, which has been brought together out of love for camaraderie, the game and giving our youth a way out rather than resorting to violence.”

The club has already played two matches in this season’s KSAFA Major League, winning the opener 3-0 against Shortwood United FC, before battling to a 3-3 finish in Saturday’s humdinger against Maverley-Hughenden.

Darrington Ferguson, Duhaney Park FC’s President, expressed gratitude to “all the persons who got behind the wheel of the cart to get this thing going” while explaining its value and relevance of the football club to community development.