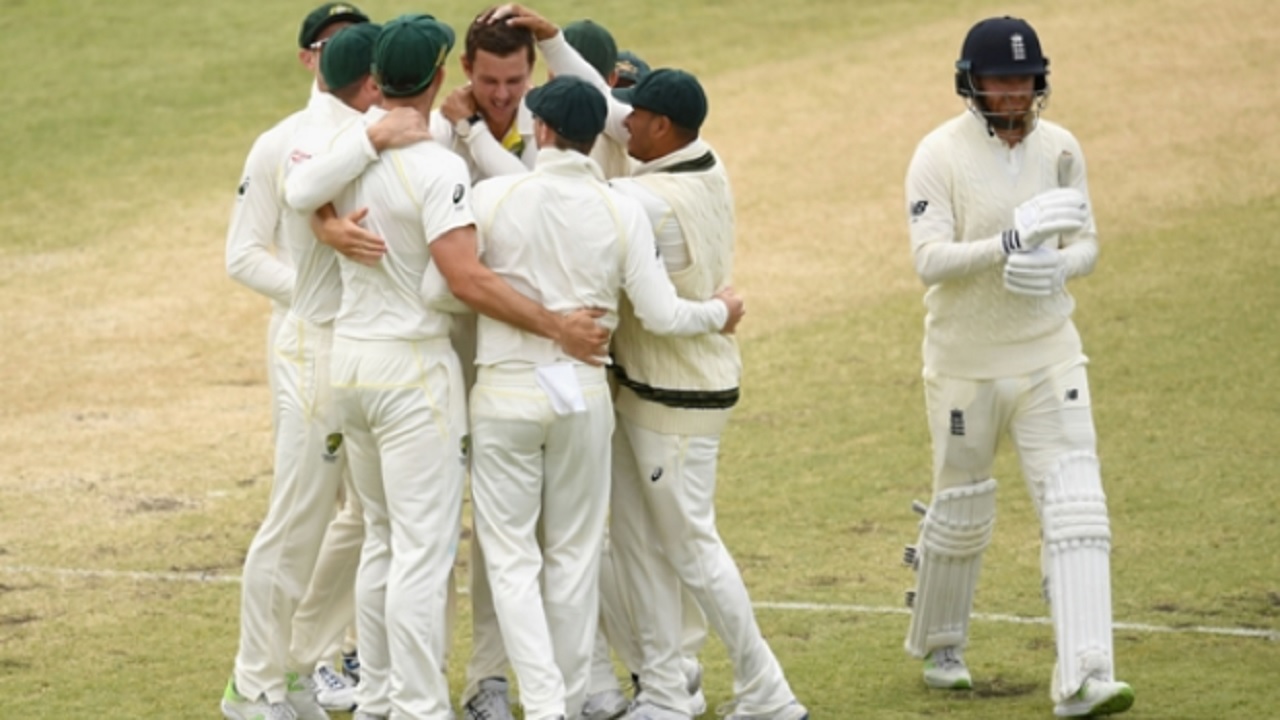 Australia have reclaimed the Ashes and remain on course for a 5-0 whitewash of England, after completing an innings-and-41-run win on the final day of the third Test in Perth.

Rain initially threatened to deny Steve Smith's men on Monday, with a combination of showers and wet patches on the pitch delaying the start of play at the WACA and shaving 20 overs from the final day.

However, the hosts still wrapped up victory with plenty of time to spare, Josh Hazlewood taking 5-48 - his sixth five-wicket haul in Tests - as England were dismissed for 218 in their second innings.

Having now been beaten in Brisbane, Adelaide and Perth to relinquish the urn, England are in danger of losing 5-0 for the third time in four tours of Australia.

The tourists were 368-4 early on day two of this match, but collapsed alarmingly to 403 all out before Australia powered to 662-9 declared on the back of 239 from Smith and Mitchell Marsh's 181.

Dawid Malan, who made a maiden Test hundred in England's first innings, impressed again on Monday by reaching 54 after his side had resumed on 132-4, but there was little else in the way of resistance as Australia claimed the six wickets they required.

Pat Cummins claimed the series-clinching scalp after tea had been pushed back with England nine down, the seamer having Chris Woakes caught behind for 22.

Moeen Ali almost departed on four, edging Hazlewood to Smith at second slip. The Australia captain thought he had taken the catch, but the soft signal from the umpires suggested otherwise and there was not enough evidence to overturn the decision.

Aside from some variable bounce, Australia's seam bowlers rarely troubled Moeen and Malan, who put on 39 for the sixth wicket.

However, Lyon made the breakthrough, trapping Moeen (11) lbw a ball after an inside edge saved the Englishman. It marked the fifth time in six innings this series that Lyon removed Moeen.

Hazlewood thought he had Malan, then on 53, as Australia reviewed an lbw decision, but his delivery was pitching outside leg stump.

Malan did not hang around much longer, though, gloving Hazlewood through to Tim Paine down the leg side, effectively ending any slim hopes England had of rescuing a draw.

As has been the case throughout the series, England's tail failed to wag. Craig Overton (12), batting with an injured rib, and Stuart Broad (0) fell cheaply, before Cummins - who struck James Anderson in the face with a nasty short ball - finished the job by ousting Woakes.