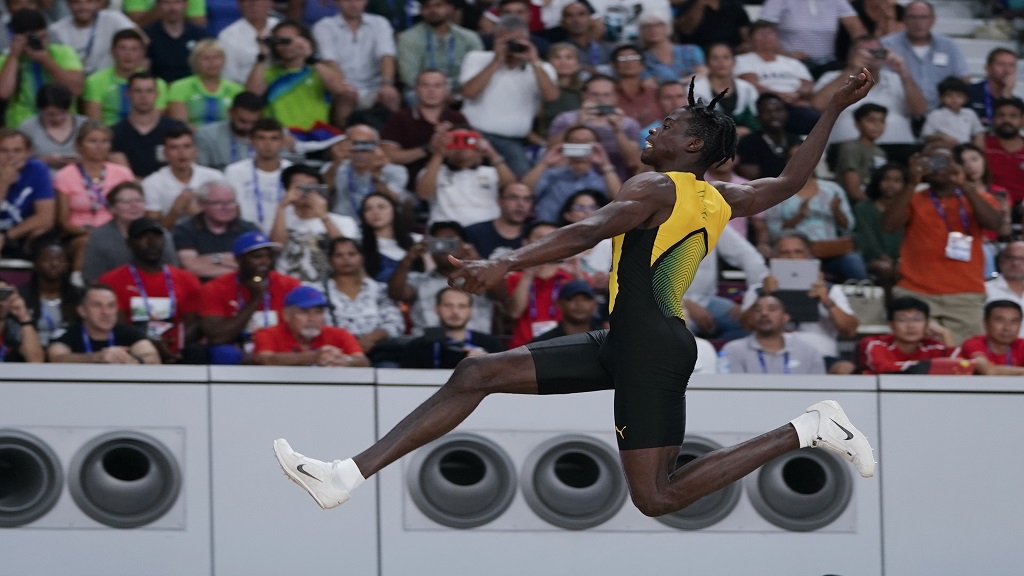 Tajay Gayle stunned the world on Saturday to win the gold medal in the men's long jump at the 2019 IAAF World Athletics Championships in Doha, Qatar.

Many in Doha anticipated the coronation of rising long jump star Juan Miguel Echevarria. However, it was instead Gayle who beat him to the punch courtesy of a stunning Jamaican record of 8.69m – the longest wind-legal leap in the world for 10 years.

Playing the perfect game of catch me if you can, Gayle established control of the competition in round one with a splendid 14cm PB of 8.46m and the 23-year-old would remain unsurpassed throughout the competition.

Olympic champion Jeff Henderson of the USA competed resolutely to take silver with a best of 8.39m. While on this occasion, Echevarria of Cuba, had to settle for bronze with 8.34m.

After Echevarria, the world number one, led the qualifiers by 28cm with an impressive 8.40m many people predicted the 21-year-old Cuban was nailed on for gold.

However, from the third jump of the competition, Gayle, the Pan American silver medallist, made a clear statement as to his gold medal intentions by sailing out to 8.46m.

All eyes were then fixed on Echevarria, who last year set a lifetime best of 8.68m to climb to number ten on the all-time lists and who leading into Doha was unbeaten since May.

Launching his take-off more than 20cm behind the plasticine he landed out to 8.25m to take second spot – a handy leap, which hinted at his ability to surpass the early leader Gayle.

Echevarria, however, would exit the first stanza not on second but provisional bronze as Henderson opened his competition with an impressive 8.28m.

Gayle followed up his first round PB with two red flags while in round three, Henderson with 8.39m and Echevarria with an 8.34m jump loomed closer into the rear view mirror of the Jamaican leader.

Yet it was the fourth round jump which was to determine the outcome of gold. Operating with scintillating speed on the runway, Gayle launched out to a huge 8.69m in round four, sprinting out of the pit in elation.

The performance was a massive 37cm ahead of his pre-competition PB and while not quite “Beamonesque” it was nonetheless a hugely impressive advance. The performance immediately dislodged Echevarria from number ten in the all-time World Lists and was also the longest jump seen in a World Championship final for 24 years - since Ivan Pedroso’s 8.70m leap in Gothenburg.

Under the weight of expectation neither Henderson nor Echevarria could respond in the final two rounds. While Gayle opted to pass – fairly safe in the knowledge the gold was likely his – Henderson registered 8.13m and 8.17m while the Cuban could only muster 7.91m and a foul.

The gold was Gayle’s – Jamaica’s first in this event in World Championship history.

Showing impressive tunnel vision and a clear mind to claim gold, Gayle said: “I was just focused on one thing. I did not let anything disturb or distract me. Yesterday (in qualifying) I was overthinking stuff. But there is nothing to think about on the run-up. The 8.69m was a perfect jump for me. I am very grateful for that. I do not know how I will celebrate tonight, maybe watch a movie.”

DOHA 2019: At track championships, it's as if Russia doesn't exist