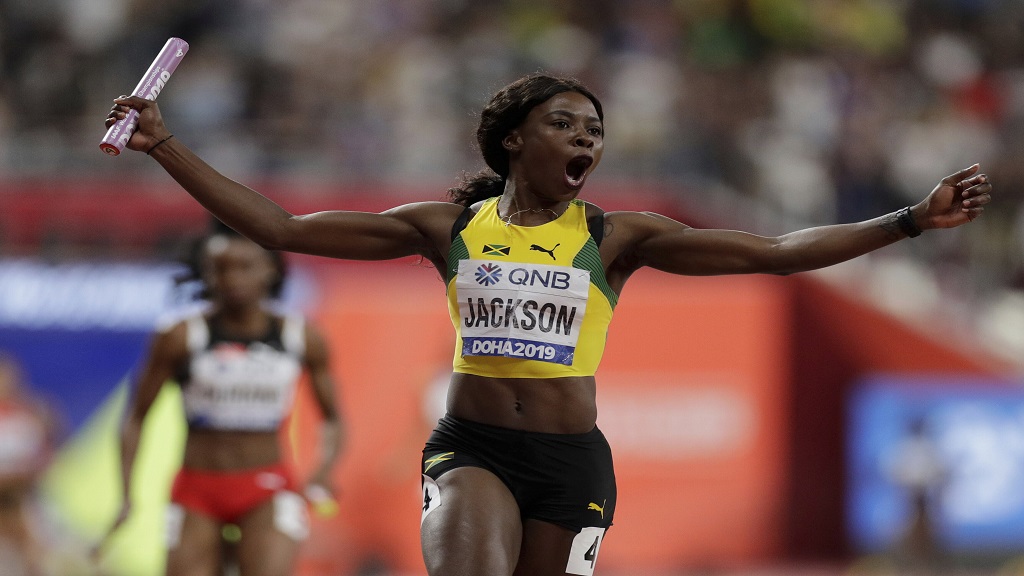 Jamaica dominated the women's 4x100-metre relay final at the 2019 IAAF World Athletics Championships in Doha, Qatar on Saturday to win the gold medal.

The victory earned Shelly-Ann Fraser-Pryce her ninth career world championship gold medal. That's the second highest of any woman in history bar Allyson Felix, who has 12 and could win a 13th in the 4x400 on Sunday.

It was the second gold medal for Fraser-Pryce in Doha. The 32-year-old double Olympic champion had won the gold medal in the 100 metres on September 29, 10 years after her first.

Running second with her hair yellow and pink, Fraser-Pryce chased down the British and U.S. teams before Jonielle Smith's third leg left Jamaica firmly in control.

Jamaica, which also had Natalliah Whyte and Shericka Jackson on the team,  won in a world-leading 41.44 seconds, 0.41 ahead of second-placed Britain. The British sprinter Dina Asher-Smith had her third medal of the championships after individual 200-metre gold and 100-metre silver, and her third career world medal in the 4x100.

The U.S. women's team couldn't defend its 2017 title as it took the bronze in 42.10, the fifth world championships in a row that it has finished on the podium.

A fiercely fast first leg by individual 100-metre champion Coleman put the U.S. on the way to win in a national record of 37.10 seconds despite a slow final handover to 200 champion Noah Lyles.

It's the eighth world title in the 4x100 for the United States but first since 2007. Only Jamaica has run faster with Usain Bolt at the 2012 Olympics.

Defending champion Britain took the silver in a European-record 37.36, with Japan third in 37.43.

Jamaica failed to qualify for the men's final.

The gold medal in the women's 4x100-metre relay represents the ninth medal for Jamaica in Doha.