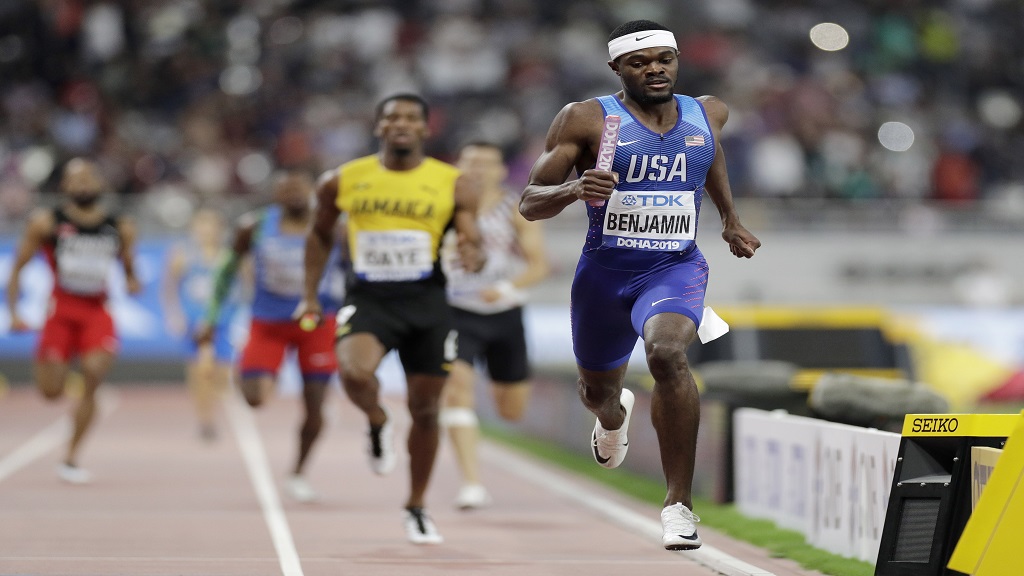 Demish Gaye (left) anchors Jamaica to the silver medal while Rai Benjamin of the United States moves away for the gold in the men's 4x400m relay final at the World Athletics Championships in Doha, Qatar, Sunday, Oct. 6, 2019. (AP Photo/Petr David Josek).

Jamaica have secured the silver medal in the men's 4x400m relay, the final event of the track and field world championships in Doha, Qatar on Sunday.

The Jamaican quartet of Akeem Bloomfield, Nathon Allen, Terry Thomas, and Demish Gaye earned the second spot on the podium in a season’s best of 2:57.90 to hand the Caribbean nation a seventh world silver medal in this event.

Kevin Borlee held off world 400m silver medallist Anthony Jose Zambrano of Colombia on anchor to finally deliver Belgium’s elusive first world medal in this event. Colombia had to be content with a national record of 2:59.50 in fourth. The 2017 champions Trinidad & Tobago banked fifth in 3:00.74.

Returning to their vintage best, the USA regained the world title with the fastest time for 11 years with a typically dominant performance.

Having surprisingly forfeited the title to Trinidad & Tobago two years ago in London their team of Fred Kerley, Michael Cherry, Wil London, and Rai Benjamin stormed around four laps of the Khalifia International Stadium in a world-leading time of 2:56.69.

There was delight for Belgium, who finally claimed a podium position in a season’s best 2:58.78 for bronze having finished a frustrating fourth at four of the past five World Championships.

In the concluding race of what has been the finest World Championships in history in terms of quality and depth, the US quartet powered by a 43.4 first leg by Kerley, the individual 400m bronze medallist, established early control of the race.

Coming off the stagger at the beginning of the back straight on leg two, Jamaica were the USA’s nearest pursuers followed by Colombia, Belgium, and Trinidad who were locked in close order.

Allen of Jamaica quickly close down the 8m gap on Cherry but the Jamaican was to pay for his efforts down the home straight as the US maintained their first-leg advantage by the second handover.

On leg three, London, who like Cherry had earlier struck gold in the inaugural World Championship mixed relay, continued to pour on the pressure and leading into the final exchange the American’s held a 10m lead on Jamaica. A quality third leg by Dylan Borlee had enabled the Belgian to eke out a five-meter advantage on the pursuing Colombians.

There was little change on the final leg. Rai Benjamin, the 400m hurdles silver medallist, could enjoy the final leg as he helped the US plunder a 10th world men’s 4x400m title.

Britain failed to finish after falling at a changeover.

Jamaica finished the championships third on the medal table in terms of gold with three gold medals, five silver and four bronze for a total of 12. That equalled the most medals Jamaica had won at the IAAF World Championships. Jamaica also won 12 at the 15th edition in Beijing, China in 2015,

The U.S. will host the next championships in Eugene, Oregon, in 2021.