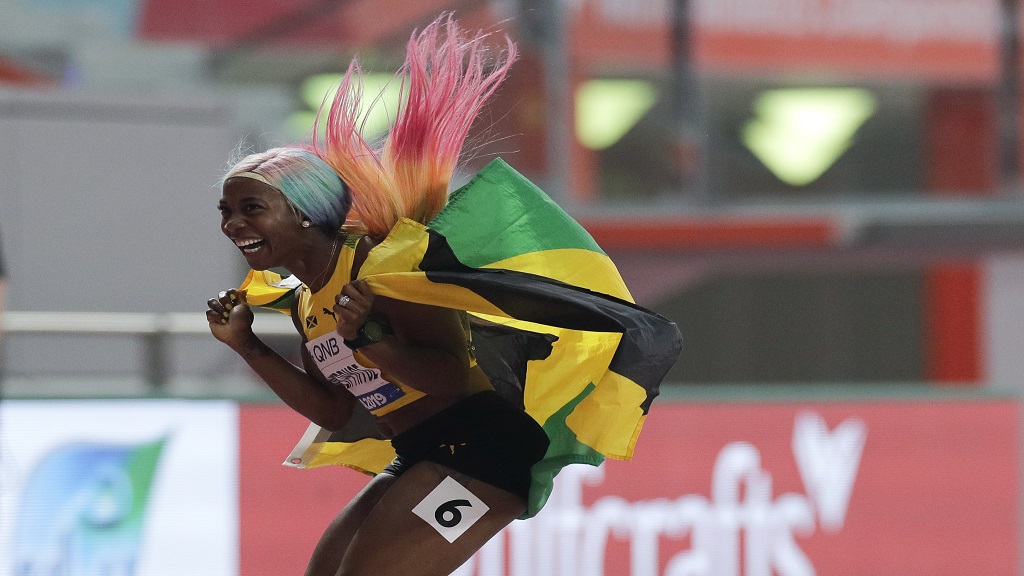 Shelly-Ann Fraser-Pryce of Jamaica has won her fourth world championship gold medal in the 100 metres, 10 years after her first,  in Doha, Qatar n Sunday.

After revealing a new rainbow-dyed hairstyle, she clocked 10.71 seconds for the victory.

The 32-year-old double Olympic champion was ahead after three strides in a final that had been preceded by the same kind of sound-and-light show that had ushered in the men’s final on the previous evening.

And she never lost that position as she crossed in the fastest time run this year, just 0.01 off her seven-year-old personal best, equalling the mark she ran to win this title at Moscow in 2013.

The time was just below the national record of 10.70 seconds she shared with Elaine Thompson. 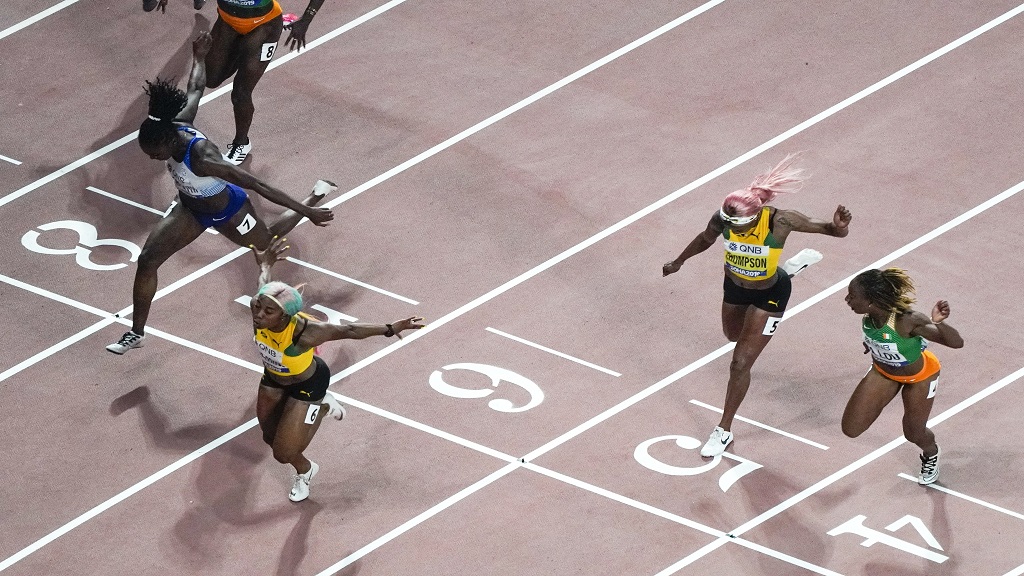 Fraser-Pryce had registered her intentions by being the fastest qualifier to the final, clocking 10.81 in winning the third and final semi-final.

Dina Asher-Smith became the first British woman to win an individual World Championships sprint medal in 36 years as she finished second for the silver medal in 10.83, a new British record.

Defending champion Tori Bowie of the United States withdrew before the semifinals. No reason was given, but injuries have hampered her form over the last year.

For double world 200m champion Dafne Schippers of The Netherlands the evening ended in bitter disappointment as an adductor problem she felt after qualifying in the earlier semi-finals prevented her taking part.

Fraser-Pryce, her bright yellow wig now swapped for one of many colours, had celebrated what was her 12th world title in all by parading her son Zyon, to whom she gave birth in August 2017.

“Standing here having done it again at 32, and holding my baby, is a dream come true,” Fraser-Pryce said. “I had no sleep last night. Last time I was at a major championship was 2016 and I just could not sleep with nerves. But with mental toughness you will get what you want.

“I can’t believe it. I worked so hard to be back. The field was so strong I had to come good here and I’m so excited to come out with victory.

“I just wanted to nail my start, which I did, and in the end, I was just making sure to get to the line, and not leaving anything to chance.

“Zyon and my husband have been my strength. When everybody else doubted me, they never did. It’s down to them that I am here again.”

Fraser-Pryce has returned to the zenith of world sprinting this year, having started the year marginally behind Thompson at the top of the world listings after both recorded 10.73 at the Kingston meeting on June 21.

And with this performance she reversed the result of the IAAF Diamond League final earlier this month when she had taken second place behind the Briton.

The newly established world 100m champion will not be contesting the women’s 200m that gets underway on Monday, and Asher-Smith – European 100 and 200m champion at the age of 23 – will go into an event that includes Ta Lou, the 2017 silver medallist, and Thompson with confidence high.

Fraser-Pryce's gold represents the third medal for Jamaica in Doha following silver in the mixed 4x400m earlier in the day and Tajay Gayle's gold in the men's long jump on Saturday.