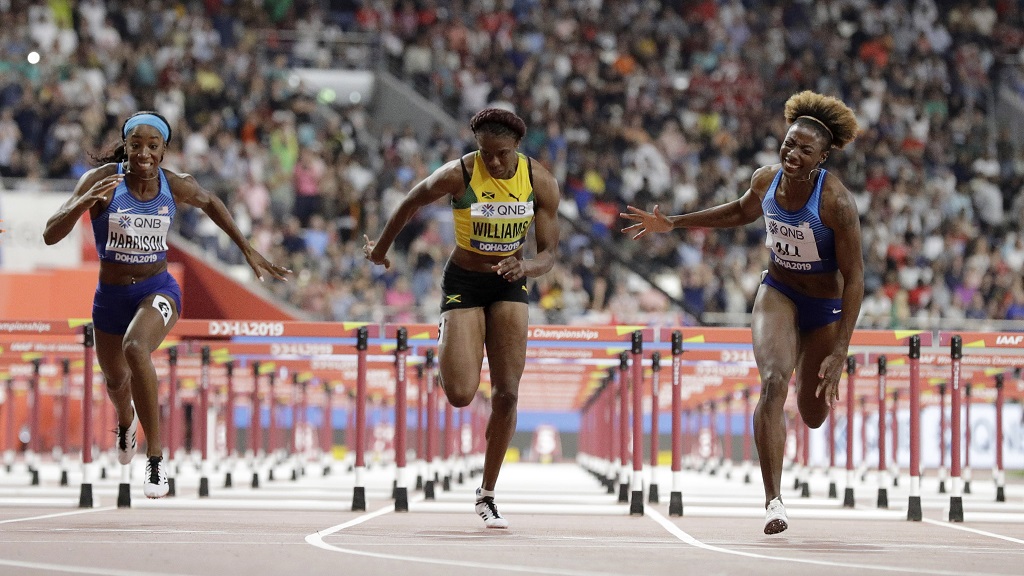 Danielle Williams of Jamaica finished third for the bronze medal in the women's 100-metre hurdles final on Sunday at the 2019 IAAF World Athletics Championships in Doha, Qatar.

Williams, who stunned the world in 2015 to win the title, was this time upstaged by the two Americans - Nia Ali and the world record holder and world indoor champion Kendra Harrison.

Williams, the 2015 world champion,  and Harrison went into the championships as the medal favourites.

The 27-year-old Williams won her semifinal in 12.41, finishing 0.03 ahead of Ali, while Harrison won hers in 12.58. Nigeria’s Tobi Amusan also emerged as a contender after winning her first-round heat in a PB of 12.48 and then equalling that time to win her semifinal.

Those same four women got out best in the final and were level over the first few barriers. But while many were looking at Williams or Harrison to edge ahead, it was Ali who emerged as the leader at halfway.

A proven championship performer, Ali held off the strong three-pronged challenge from Harrison, Williams, and Amusan and crossed the line a metre ahead of her rivals, stopping the clock at a lifetime best of 12.34 (0.3m/s).

Harrison got the better of Williams on the line, clocking 12.46 to take the silver medal just 0.01 ahead of her Jamaican rival. Amusan was fourth in 12.49. It was just the second time in history, after the 1987 World Championships final, in which four women have bettered 12.50.

Megan Tapper failed to finish after pulling up halfway with an apparent injury, while the other Jamaican Janeek Brown finished seventh in 12.88 seconds.

The victory for Ali made her the fourth woman in Doha to win a gold medal within a year or two of giving birth.

The 30-year-old Ali returned to action earlier this year after taking the 2018 season off to give birth to her second child. After giving birth to her first child in 2015, Ali went on to win her second world indoor title in 2016 and followed it with Olympic silver later that year.

Earlier, Jamaica's Chanice Porter finished eighth in the women's long jump with an effort of 6.56m.

Malaika Mihambo of Germany won the gold medal to add to her European title with one of the biggest leaps of recent years.

Mihambo jumped 7.30m in the third round when she was facing elimination if she didn't improve her result. It was the second-best leap by anyone in the last 15 years, beaten only by a 7.31 from Brittney Reese of the United States in 2016.

No one else could come close.

The silver went to Ukraine's Maryna Bekh-Romanchuk with 6.92, one centimetre ahead of Nigerian bronze medalist Ese Brume.