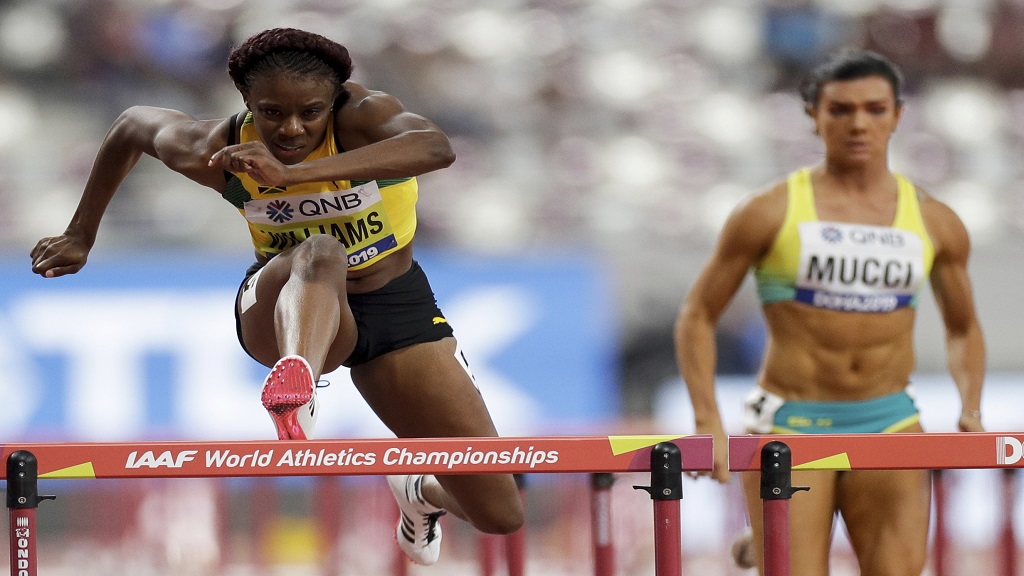 Jamaican record holder in the women's 100m hurdles, Danielle Williams, has won her first-round heat in the event at the 2019 World Athletics Championships in Doha, Qatar.

The three other Jamaicans, Megan Tapper, Yanique Thompson and Janeek Brown all secured second place in their respective heats to get automatic qualifying spots into the semifinals.

The semifinals and final are scheduled for the 10th and final day on Sunday.

Competing in heat three on Saturday's ninth and penultimate day at the Championships, the 27-year-old Williams won her heat very comfortably in a very fast 12.51 seconds.

Williams is the gold medal favourite. When she won the world 100m hurdles title four years ago, it was seen as one of the biggest surprise performances of the championships. Now, however, the Jamaican is a big favourite.

A false start in the 100m hurdles final at the Jamaican trials meant she faced the prospect of missing the IAAF World Athletics Championships altogether. But as the season gained momentum, so did Williams and over the past couple of months she has produced the four fastest times of her career.

At the IAAF Diamond League meeting in London she ran a PB of 12.41 in her heat and followed it with a national record of 12.32 to win the final, moving to seventh on the world all-time list. She notched up two more IAAF Diamond League victories, winning in Birmingham and at the final in Zurich, clocking 12.46 on both occasions.

More significantly, though, she defeated the world record-holder, Kendra Harrison, both times.

Tapper, the bronze medallist at the 2019 Pan American Games, clocked 12.78-second clocking for her second-place finish in heat one.

Tapper finished behind two-time world indoor champion Nia Ali of the United States, who returned to action earlier this year after taking the 2018 season off to give birth to her second child.

Thompson's second-place finish in heat two came in 12.85 seconds, behind Italy's Luminosa Bogliolo, who won in 12.80.

Brown's second-place finish in the fifth and final heat came in 12.61 seconds behind Nigeria’s Tobi Amusan, who won in a new personal best 12.48 seconds, the fastest qualifying time going into the semifinals.

Brown, who won the NCAA title in 12.40 to hold the Jamaican record for a matter of weeks before Williams broke it, is the second-fastest woman in the world.  But, after a long collegiate season, though, her recent races haven’t quite matched the times she was running earlier in the season.

Williams' 12.51 is the second-fastest qualifying time going into the semifinals, while Harrison, who won heat four in 12.55 seconds, is the third-fastest qualifier.