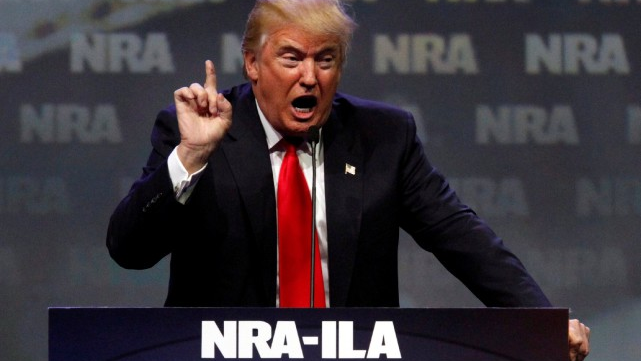 Some British doctors and legislators reacted angrily Saturday to President Donald Trump's pro-gun comments at an NRA convention comparing a London hospital to a war zone because of knife crime.

Trump's provocative comments are expected to increase concerns about his planned first presidential visit to Britain on July 13.

Dr. Martin Griffiths, a surgeon at the Royal London Hospital, tweeted that he would be "happy to invite Mr. Trump" to visit his hospital and meet with London's mayor and police chief to learn how the city has reduced violent crime.

"There is more we can all do to combat this violence, but to suggest guns are part of the solution is ridiculous," Brohi tweeted. "Gunshot wounds are at least twice as lethal as knife injuries and more difficult to repair."

At the NRA convention Friday in Dallas, Trump said Britain has tough gun laws but that one London hospital is awash with blood because of knife wounds.

"They don't have guns. They have knives and instead there's blood all over the floors of this hospital," Trump said. "They say it's as bad as a military war zone hospital ... knives, knives, knives."

Trump spoke as London is experiencing an increase in knife-related violence.

At the NRA convention, Trump also suggested that a coordinated extremist attack on Paris in 2015 that claimed 130 lives would have been far less deadly if Parisians had been carrying guns to protect themselves.

"Free circulation of weapons in society does not constitute a rampart against terrorist attacks, to the contrary, it can facilitate ... this type of attack," he said in a statement Saturday.

The U.S. president plans a one-day stop in Britain as part of a working visit. He has been invited for a state visit to be hosted by Queen Elizabeth II, but no date has been set for that ceremonial event.

Trump has riled many Britons in the past by suggesting that Muslim extremists have made some British cities unsafe. He also drew criticism from Prime Minister Theresa May, a conservative, and other political leaders for retweeting anti-Muslim videos originally posted by one of the leaders of the far-right Britain First group.

Trump threatens countries who don't back US World Cup bid