Djokovic gets by Bautista Agut to reach 6th Wimbledon final 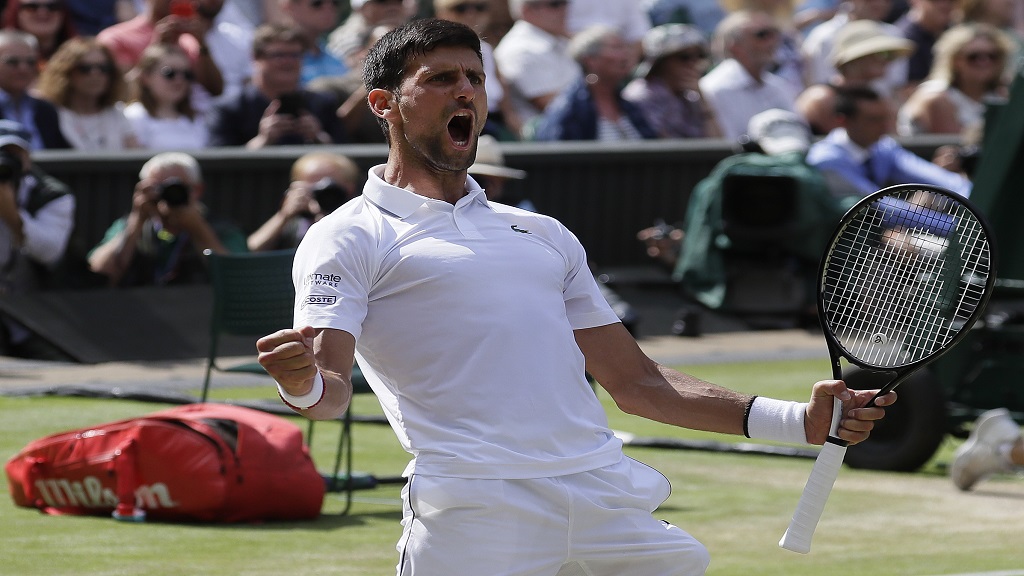 Novak Djokovic won through to his sixth Wimbledon final and will chase a fifth title on Sunday after grinding out victory against Roberto Bautista Agut.

The 6-2, 4-6, 6-3, 6-2 success for Serbian top seed Djokovic was not always pretty, and his frustration boiled over several times.

There were moments when Djokovic seemed to believe he was in a bearpit of an arena, rather than the genteel surroundings of Centre Court in leafy south-west London.

He took on the crowd for showing support for Bautista Agut, when the Spanish 23rd seed produced a spirited fightback to take the second set, and may have won few friends.

Yet this was all about getting another job done for Djokovic, another step on a well-trodden path towards glory.

It has been Djokovic, and not Andy Murray, not Roger Federer and certainly not Rafael Nadal, who has been the dominant force in the men's singles at Wimbledon over the last decade.

Bautista Agut was playing his first grand slam semi-final at the age of 31 in a week when he was meant to be on his own stag party in Ibiza. He was shaky in the early moments and dropped serve twice in the opening set.

The inevitable question was whether this would remain a one-sided contest, as disappointing as the two women's semi-finals on Thursday, or whether Bautista Agut might find a response.

Watched from the Royal Box by Rod Laver and Alex Ferguson, the initially imperturbable Djokovic suddenly hit a dip and his opponent began to score with winners.

One such shot, a tremendous inside-out forehand, whistled past Djokovic's backhand to earn a break.

Djokovic became ragged, and his mood darkened when Bautista Agut levelled the match with a forehand off the netcord, the ball dropping dead on the world number one's side.

Seemingly riled by the British crowd siding with Bautista Agut, rather than the time-and-again Wimbledon champion in their midst, Djokovic threw up his arms in an invitation for them to get behind him instead.

The rallies became longer, Djokovic ready to test Bautista Agut's mental and physical stamina. And when Bautista Agut held his first service game of the third set, Djokovic swung his racket towards the grass in exasperation.

Eventually he managed to channel his aggression sensibly and broke for 4-2 by taking command of the net on successive points, roaring a battle cry when he smashed away to seize the momentum.

Djokovic pointed to his ear, another message to the crowd, when he lashed a backhand down the line to win a remarkable 45-shot point and save break point in his next service game.

He took the set, missed out on three break points at the start of the fourth but struck in Bautista Agut's next service game, again in the fifth game, and it was all downhill from there.

This was seen by many as the aperitif for the second semi-final between Federer and Nadal. Djokovic may end up being the headline act again come Sunday evening.

John McEnroe, commentating for the BBC, observed Djokovic had managed to turn his perception of crowd bias into a positive.

"He used it to energise himself and you've got to love that," McEnroe said.