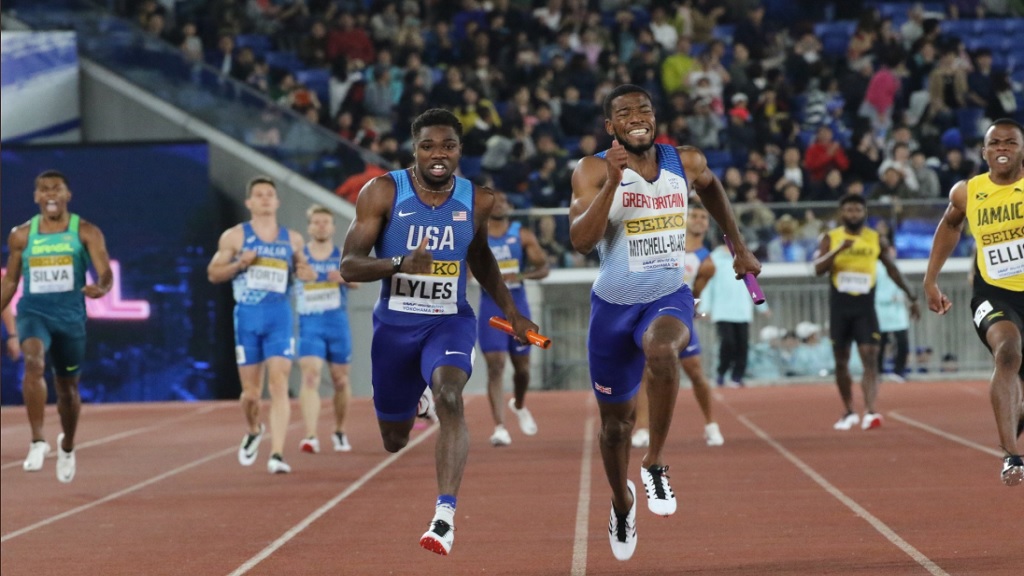 Jamaica's anchor leg runner Nigel Ellis (right) struggles behind in the final of the men's 4x100m at the IAAF World Relays in Yokohama on Sunday, May 12, 2019.

Jamaica ended the IAAF World Relays Yokohama 2019 with a disappointing medal haul of three, all coming on the final day of the two-day championship on Sunday.

The country's medal haul comprises two silver and a bronze, which places Jamaica second in the standings with 27 points.

The Jamaicans chase for a medal in the women's 4x200m relay was strewn with errors on the first and final legs.

The first exchange between Thompson and Stephenie Ann McPherson nearly knocked the squad out of the race. By the time anchor Shericka Jackson managed to regroup after a poor exchange from Fraser-Pryce, she was trailing France, China, and the USA as the four approached the final straight.

By then Maroussia Paré was out of reach, the Frenchwoman crossing the line in 1:32.16, a national record, with China second in 1:32.76, an Asian record. The USA, which finished third were disqualified for exchanging out of the zone, elevating fourth-place Jamaica, which clocked 1:33.21, to third.

Jamaica did not qualify for the final of the men's 4x200m relay following a dismal showing in the heats earlier.

The quartet of Chadic Hinds, Nigel Ellis, Oshane Bailey, and Jevaughn Minzie finished fifth in 1:22.83 seconds, well behind the USA (world-leading 1:19.73),  but the team was later disqualified.

Jamaica then came close to winning a gold medal in the women's 4x100m relay but Aleia Hobbs of the USA barely held off Jamaica's fast-closing anchor Jonielle Smith to win by just 0.02 in 43.27, taking the event for the first time since the inaugural edition in 2014.

Germany, the winners in Nassau two years ago, were a distant third in 43.68, just ahead of Brazil which clocked 43.75.

Gayon Evans, Natasha Morrison, and Shashalee Forbes were the other members of Team Jamaica.

In the evening-capping men's 4x100m final, the Jamaican quartet of Nesta Carter, Julian Forte, Rasheed Dwyer, and Nigel Ellis struggled from start to finish and eventually crossed the line in sixth place in 38.88 seconds.

Brazil pulled off the biggest upset of the night to win the gold medal.

It was the South American giant's third fastest performance, signalling that the host of the last Olympic Games could be a force in the next Games that will be contested in just over a year about 30 kilometres to the north.

The battle for third was even closer. Great Britain clocked 38.15 to get the nod by a scant 0.01 ahead of China.

Earlier, Jamaica secured their first medal through the men's 4x400m relay team in a race that came down to a close battle to the wire between Trinidad and Tobago and the USA.

Trinidad & Tobago clocked 3:00.81, a world lead, for the gold medal, just ahead of the USA, whose anchor leg runner Paul Dedewo fell to the ground in exhaustion before learning that he'd be disqualified for a lane violation.

The Jamaican quartet of Demish Gaye, Akeem Bloomfield, Rusheen McDonald, and Nathon Allen crossed the line in third place. But, following the US's exit, Jamaica, which clocked 3:01.57, were elevated to second with Belgium third in 3:02.70. Another two steps back, Japan clocked 3:03.24, one of the host nation's two fourth-place finishes on the day.

After victories in each of the three previous editions of the IAAF World Relays, the US were finally knocked from its pedestal in the women's 4x400m where an inspired Polish squad took the evening's first title after Justyna Swiety-Ersetic successfully fought off a three-pronged attack down the homestretch.

Four teams were in contention as the field came off the final turn, but as hard as US anchor Courtney Okolo, the world indoor champion, tried to chip away at the deficit, the Pole fought back and ultimately held on to bring her triumphant squad to the line in 3:27.49. Okolo won the battle for second over Italian anchor Raphaela Boaheng Lukudo by 0.09 in 3:27.65.