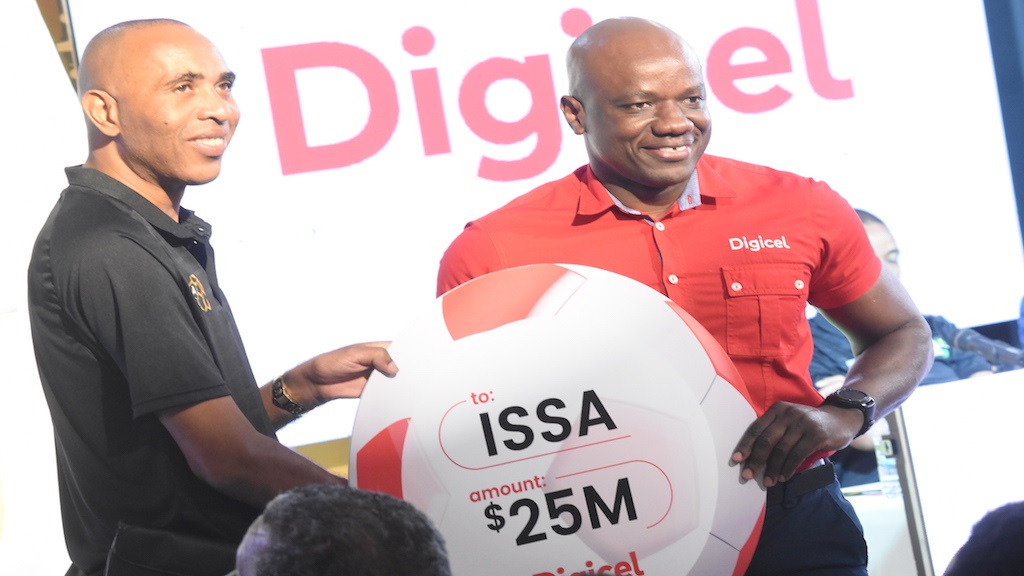 Elon Parkinson (right), PR & Communications Manager at Digicel, presents a symbolic cheque to Keith Wellington, president of ISSA during the launch of the 2019 schoolboy football season on Wednesday, August 21 at the Terra Nova All Suite Hotel. (PHOTOS: Marlon Reid).

Digicel and Wisynco on Wednesday launched their second year as title sponsors of schoolboy football at Terra Nova All Suite Hotel in St Andrew.

The 2019 season is scheduled to kick off on Saturday, September 7 with seven Manning Cup games and 31 daCosta Cup matches.

The announcement was made by Keith Wellington,  president of the Inter-Secondary Schools Sports Association (ISSA).

Digicel, in its second stint as title sponsors, last year announced that the telecommunications firm and entertainment provider would invest $75 million over three years in the urban area Manning Cup and Walker Cup Knockout competitions. Wisynco, then, announced a sponsorship package of close to $100 million, over the three years, in the rural area daCosta Cup and Ben Francis Knockout.

On Wednesday, Digicel handed over $25 million to ISSA for year two, while Wisynco made a presentation of $37 million.

This will be the second time that both the Manning Cup and daCosta Cup competitions will operate under separate sponsorship.

The 2019 season will see 129 teams competing for the six trophies. In addition to the Manning Cup and daCosta Cup, teams will also compete for the Walker Cup Knockout, Ben Francis Knockout Cup, Champions Cup, and the season-ending Olivier Shield.

The format of the Manning Cup and daCosta Cup will remain the same. However, for the second straight year, ISSA has announced changes to the Walker Cup and Ben Francis Cup after the organisers were faced with heavy criticism for changing both knockout competitions from their original formats.

The competitions were labelled the "losers cup" as the new format prevented top schools from competing compared to former years.

Linvern Wright, who announced the structure of the competitions, pointed out that ISSA will not revert to the original format of the Walker Cup and the Ben Francis Cup.

He said, "last year we were experimenting. We listened and have made changes but will not go back to the original formats.

"The commitment continues to ensure that our players are rested for at least 72 hours between games."

The Ben Francis Knockout Cup will be played in three sets of matchups in three rounds, with the second round being the semi-finals and the third round, the final.

In the Walker Cup competition, all teams knocked out in the Round of 16 home-and-away second round tie of the Manning Cup will be involved in a playoff with the winners matching up in a subsequent round with the third and fourth place teams in each of the two Manning Cup quarterfinal groups for four matchups. The winners of each of those games will qualify for the semi-finals. The two semi-final winners will contest the final.

Last season, the Walker Cup competition comprised the eight losers of the Manning Cup Round of 16 home-and-away knockout;  a major change compared to former years when the seven preliminary round group winners and the best second-place earned the right to contest that competition.

SportsMax will be media partners and will broadcast selected matches live throughout the season.