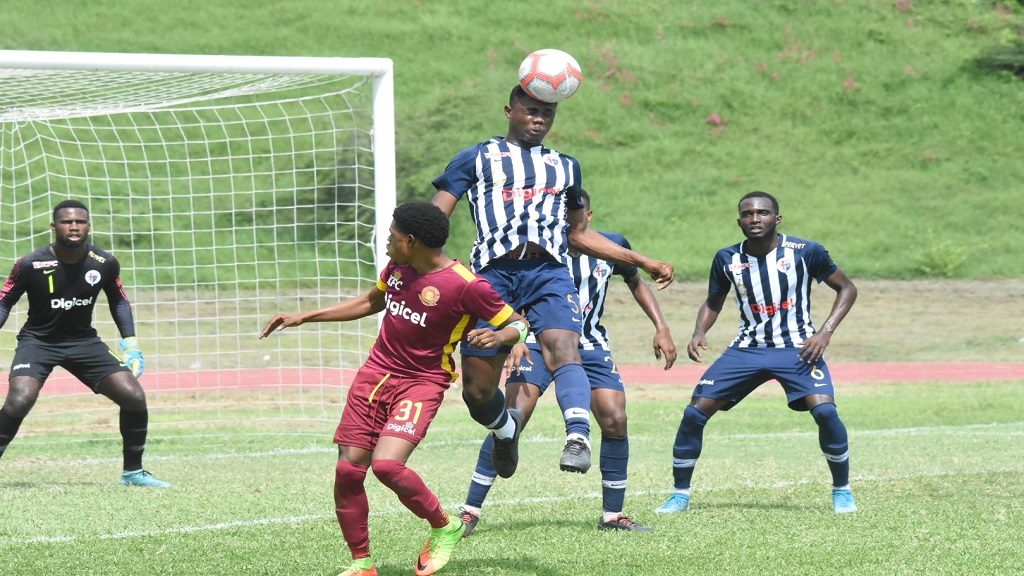 Kristopher McDonald of Jamaica College heads a ball out during the remaining eight minutes of their urban area ISSA/Digicel Manning Cup game against Wolmer's Boys at the Stadium East field on Wednesday, October 16, 2019. (PHOTO: Marlon Reid).

Jamaica College (JC) secured a controversial 2-2 draw against Wolmer's Boys as the final eight minutes of their Group G ISSA/Digicel Manning Cup game at the Stadium East field was completed on Wednesday.

Tajay Grant scored the equalising goal four minutes after the resumption of play, which resulted in a protest by some Wolmer's players.  Ty McKetty was issued a red card along with a member of the coaching staff arising out of the protest.

The Wolmerians were leading the game 2-1 on September 16 but it was called off in the 82nd minute after five players were struck by lightning, two of which were admitted to hospital.

The teams had also battled to a 2-2 draw in the return game at JC on September 27. On that occasion, 29-time champions JC also came from behind to secure the draw.

Both schools were already confirmed as the two automatic second-round qualifiers from the group ahead of Tuesday's fixture.

JC are leading the group with 29 points, two ahead of Wolmer's Boys. Both teams, which are undefeated, have another game remaining in the preliminary round.

Meanwhile, Kingston College (KC) completed their preliminary round schedule with a perfect record as Pembroke Hall did not show up at the Stadium East field to play the remaining 30 minutes of their match, which was blown off over a week ago because of heavy rain. KC were leading the contest 7-0. However, in accordance with competition rules, KC were awarded the three points and a three-goal margin for the no-show of Pembroke Hall.

KC ended the preliminary round with an impressive record of 39 goals for and one against from their 10 matches.

St Catherine High were also awarded three points and three goals as Penwood High did not show up for their rescheduled Group C fixture, which the school was scheduled to host Cling Cling Oval.

St Catherine High became the latest team to secure a spot in the second round of the competition with the three points awarded. They completed their schedule with 22 points, six behind group winners St Andrew Technical High School (STATHS), which completed the preliminary round without conceding a goal from their 10 matches. STATHS secured nine victories and a draw while scoring 40 goals.

Eleven schools have now qualified for the second round.

The second round of the competition will feature 16  teams. At the conclusion of the preliminary round, the first two in each of the seven groups will advance to the next round along with the best third-place and next best third-place team.

The 11 second-round qualifiers are listed below: