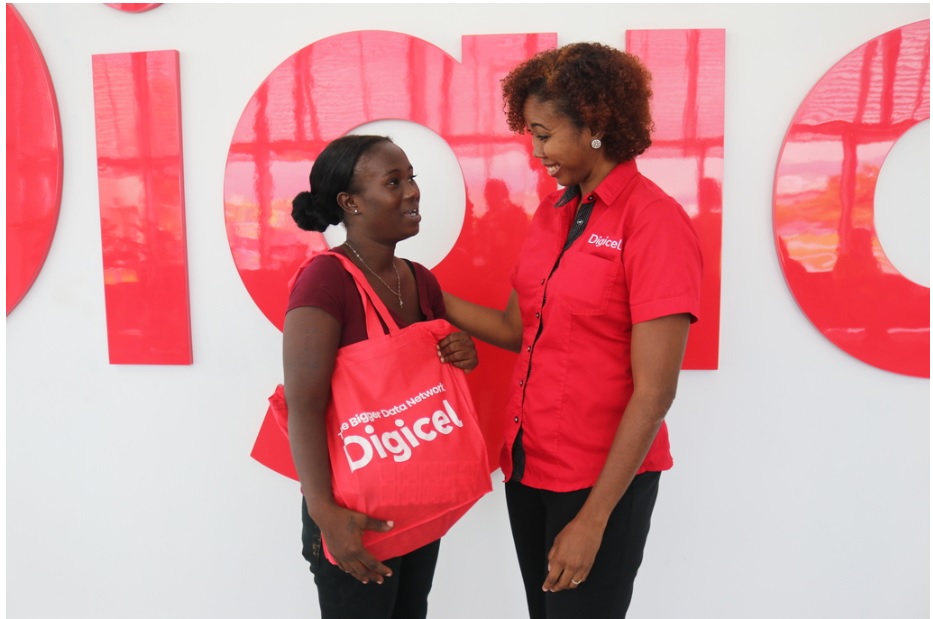 Monique McLeod, Marketing Director at Digicel Group (at right) offers a few words of encouragement to Ackaisha Green after officials from the telecommunications service provider reached out and rewarded the 'Good Samaritan' for her kind deed.

To tinker with a famous proverb, it could be said that the road to ridicule in Jamaica is perhaps paved with good intentions.

Just ask 24-year-old Ackaisha Green, who has had scorn and ridicule heaped on her by some members of the public, especially Internet trolls,, with some even suggesting that she was a "(curse word here) fool" for having done what was her civic duty.

The young woman was shot into their crosshairs after she handed over a big bag with cash which she found at an ATM in downtown Kingston a few weeks ago, to officers on duty at the Central Police Station.

The bag with stacks of $5,000 and $1,000 notes had apparently been left behind by operatives of a security service company that replenishes banking machines with cash.

Since then, it has been a mixed bag - a two-edged sword of sorts - facing Green in relation to the stunning development of the big find and her response.

“It's both ways, but I don't regret giving the money back. Even when I was walking to the Central Police Station with the bag, I wasn't afraid. If I had planned to take it, maybe I would have been afraid, but there was no fear, it was just the right thing to do," Green elaborated.

"In reference to a particular element of the positive side of public perception of her action, she had an interesting take on the matter.

“I don't see myself as a Good Samaritan, I was just doing the right thing," she stated.

The parable of the Good Samaritan was told by Jesus in the Gospel of Luke, and is centred around a traveller who was beaten by bandits and left naked and half-dead on a road. Both a priest and then a Levite ignored the half-naked man before a Samaritan rendered assistance.

Today, Green, this perceived ‘Good Samaritan’ of sorts, who didn't seek to ‘help herself’ to the cash and in the process helped in a big way to reinforce the significance of civic responsibility within society, is in need of some assistance of her own.

Only a month before finding the bag of money, her child’s father's house was damaged by fire, resulting in the destruction of several appliances and most of Green’s babies’ clothing. The mother of two boys - an eight-month-old and a 23-month-old – is in fact struggling to get back on her feet.

Earlier this week, representatives of Digicel Group gave her a phone and accessories, along with phone credit to keep her line active, which Green expressed appreciation for.

"Digicel gave me a phone (and other stuff) and I appreciate that,” she said with a smile.

Monique McLeod, Marketing Director at Digicel Group, was proud that her company was part of the process of rewarding Green for her act of extreme responsibility.

“One good deed deserves another, and this is why we wanted to personally express our sincere gratitude to Ackaisha for her rare act of selflessness. All of us are humbled by her inspirational story. It is our belief that through her, more persons will be inspired to do the right things. We are delighted to present this token of appreciation to Ackaisha, who is also a Digicel customer, knowing that she will be better able to connect and share her uplifting story with the rest of the world," McLeod said.

A donation of US$1,000 from Montego Bay-based charity, Sarah's Children, was also pledged to her, with a symbolic handover to her in Kingston by the organisation’s founder, well-known journalist, Janet Silvera. 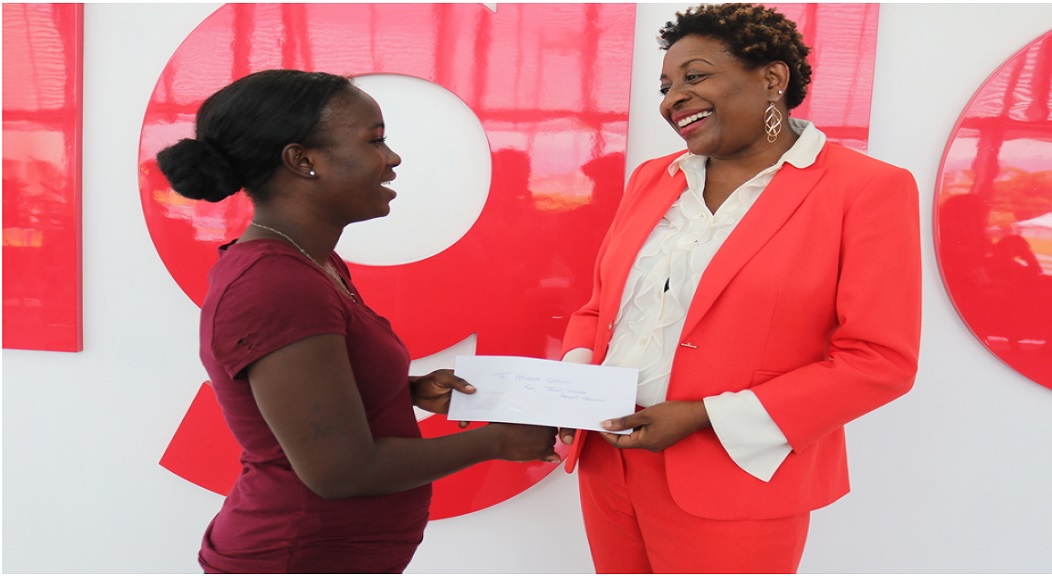 Silvera, who travelled from Montego Bay to meet Green, believes the Kingston woman should be a poster child for what honesty and integrity represent.

“She has set an example for our country in relation to honesty. Because for her to give back so much money… and despite all her challenges, she wasn’t tempted to take the cash, she should be celebrated,” Silvera said, adding that “she deserves everything good coming her way”.

Indeed, Green’s story has been generating other support her. Among those, noted businessman, Douglas Halsall, indicated that he had, up to Friday, secured $44,650 in cash to help reward Green for her honesty.

Halsall said he opened an account with an initial $20,000 at National Commercial Bank (#334465144) under the name: Douglas Halsall for Ackaisha Green.

“Let’s locate this young lady and reward her for her honesty,” Halsall tweeted on Monday.

Green is now also benefitting from an opportunity to attend a HEART Trust/NTA training programme to undertake the first two modules free of cost, and could possibly benefit from support from the Jamaican Diaspora as well.

However, her overall realities are still quite challenging.

“My children’s stuff got burnt out in a fire on James Street in downtown Kingston. I really need some help; I need a fridge and washing machine; I lost appliances in the fire; some people gave me back things,” stated Green.

“The fire happened before I found the money, but there was no temptation to take it. I just knew I had to give it back, even though I want things. I just knew it was wrong to take it, it wasn't mine," she said.

Also on the negative side, Green said she wants to correct what she described as a media-born misconception that her mother had scolded her for turning in the bag of cash that she stumbled upon.

"My mother wasn't upset that I returned the money. But the same day I found the money, I had been forced to beg her $200, and she was just talking about that, but the media made it into something else. I have been trying to fix that, but when people want to bash yuh, dem just bash yuh," she said, obviously frustrated in that regard.

No one except the security service providers who mislaid the cash and ended up getting it back is aware of just how much money was in the sack that Green returned. Clearly, she did not know.

"I don't know how much. It was a half bag of money, it was heavy, but I knew that with that amount, I wouldn't have to work again," said Green, who possesses an entrepreneur's certificate, and who fancies opening a clothes store one day.

Indeed, she is already hustling to make ends meet, as she wrestles with the twin tigers of unemployment and poverty.

"I got some phone cards from Digicel, but I have not been giving them away, I have been selling them," she said.

One thing is sure, she may be poor in pocket, but she is rich in spirit.

"God will provide a way," she said.