The combination of photos show athletes from St Elizabeth Technical High School (left) and Rusea's High posing with their cheques after the schools won the boys and girls' titles at the Digicel Western Championships, at the Montego Bay Sports Complex on Saturday. (PHOTO: Marlon Reid).

After three days of action both teams easily won the respective titles -  STETHS winning by 103.25 points and Rusea's High by 80.

Rusea's High, which won 14 of the 44 finals including one-two finishes in four of them, compiled 388.25  to top the female team scores, while STETHS finished second with  308.25. Rusea's 14 victories in finals includes six from the 10 Digicel Grand Prix events.

STETHS tallied 389.50 points to top the boys' championship.  On their way to the title, the Malvern-based school won 18 of the 49 finals, including four one-two finishes and seven of the 10 Digicel Gand Prix events. Petersfield High finished second with 286.25. 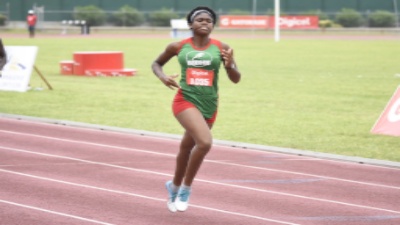 Digicel presented cash prizes to the top three finishers (boys and girls). STETHS and Rusea's High were each presented with  $250,000 for winning the boys and girls' titles.

Watson turned up in awesome form on the day to smash two meet records on his way to the 200-400 metre double.

The two record runs from Watson highlighted seven new marks, which were posted on the final day.

In a very close race for the Boys' Class 2 200-metre title, Watson just got the better of  STETHS' star sprinter Sachin Dennis, who had earlier won the 100 metres. Both athletes were credited with the same time - a record 21.24 seconds, which erased the previous best of 21.50 done by Darrion Bent of Mannings in 2006.

Watson, an IAAF World Under-18 400m gold medallist,  returned less than an hour later to close his double by smashing the 400-metre record. He clocked 48.63 seconds to erase the previous record of 49.30 set in 2006 by Ashad Baker.

The 200 and 400 metres are among the 10 Digicel Gand Prix events being contested at the four regional meets in the Digicel Grand Prix Athletics Championship.

And the Petersfield pair of Kevon Stone and Ockera Myrie were among five 100 and 200-metre double winners on the day, the two events among the Digicel Grand Prix disciplines.

Stone clocked 10.71 seconds to beat  Jaydeon Crooks (10.94) of Irwin High in the Boys' Class 1 100-metre final in the morning session. He returned in the afternoon session to close the sprint double by taking the 200 metres in 20.93 seconds over Muschett High's Lijae Holness (21.74).

The other 100-200 sprint double winners were Roshane McLeod and Orlando Wint, both of St Elizabeth Technical High School (STETHS), and Lashawn Haye of Rusea's High.

STETHS' Winsome Harris proved a cut above the field, clocking one minute 01.67 seconds to win the Girls' 400-metre open hurdles final and in the process erased the previous mark of one minutes 04:97 seconds set in 2017 by Terice Steen. 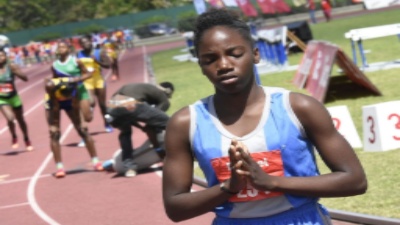 Jauavney James claimed the second record for STETHS by taking the Boys' Class 1 hurdles final in 51.47 seconds. Rovane Williams of Rhodes Hall, who had set the previous record of 53.48 in 2017,  had to settle for second place. Williams also bettered his previous record with a 52.17 clocking.

The third STETHS' record came from Adrian Nethersole, who clocked 50.76 seconds to win the Boys' Class 3 400-metre final, erasing the previous record of 50.82 set by Antonio Watson in 2016. 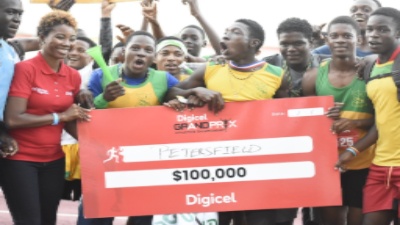