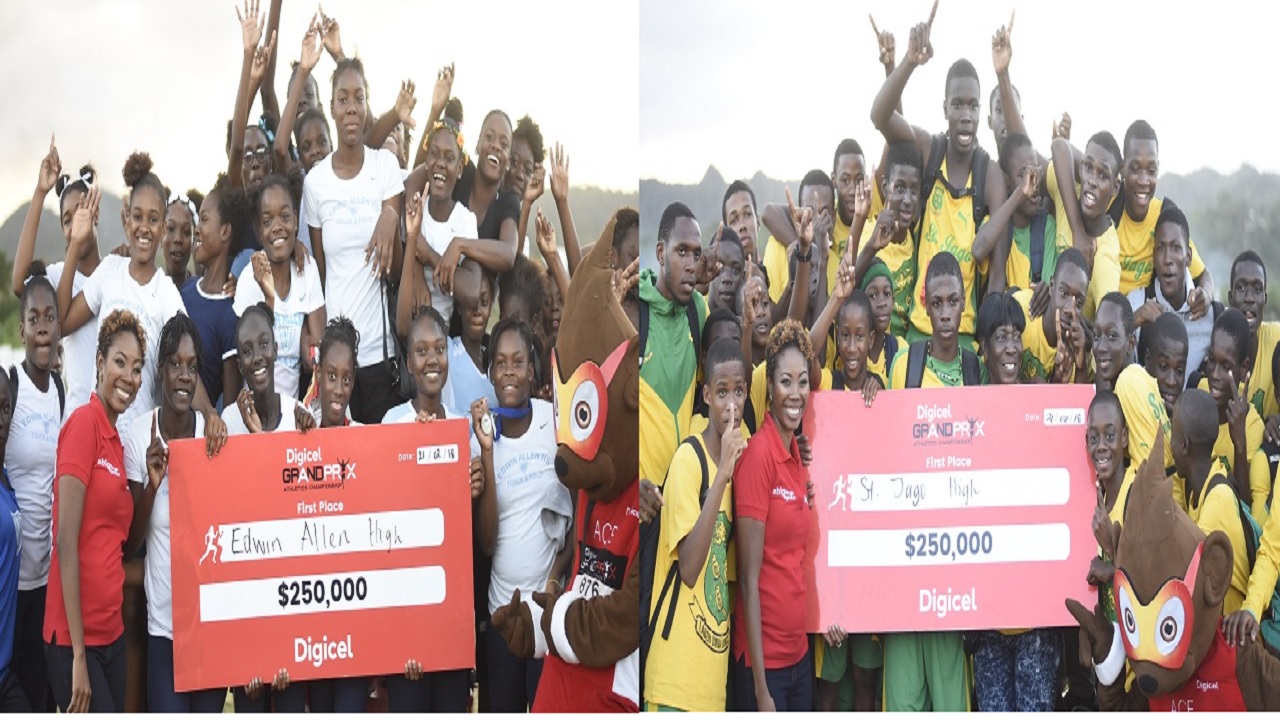 The combination of photos show Monique McLeod, marketing manager of Digicel. with athletes from Edwin Allen (left) and St Jago High posing with their cheques after the schools won the girls and boys' titles at the Digicel Central Championships, at G C Foster College on Wednesday. (PHOTO: Marlon Reid).

Spanish Town-based St Jago proved a cut above their challengers to beat  nearest rivals - Edwin Allen High - by all of 184.50 points after entering the second and final day with a 65-point lead in the boys' championship.

St Jago High compiled 346.50 points at the end of the 40 finals, while Edwin Allen High ended with 162 points.

After a ding-dong battle with Holmwood Technical on the final day in the girls' championship, Edwin Allen High pulled away for a 41.50-point victory after entering the day with a 66-point lead.

Digicel presented cash prizes to the top three finishers (boys and girls). St Jago High and Edwin Allen High were each presented with  $250,000 for winning the boys and girls' titles.

The battle for championship honours

The day was highlighted by 28 meet records, 17 of which came in Digicel Grand Prix events.

The boys' equivalent was also won in meet record with St Jago crossing the line in  three minutes 29.46 seconds to better the previous mark of  three minutes 30.39 seconds the school set in  2016.

Edwin Allen High top sprinter Kevona Davis romped the Girls' Class 2 200 metres in 23.61 to erase the previous record of 23.99 seconds she set in the preliminary round when erasing 24.30 set in 2017 by Vere Technical's star Britany Anderson.

Holmwood Technical's Michae Harriott accounted for the Girls' Class 1 200 metre meet record, winning the event in 23.56 to erase the previous mark of 23.83 set in 2016 by her teammate Ashley Williams.

St Jago High's Javari Thomas smashed the Boys' Class 2 200 metre record with a 21.53 clocking to erase the previous mark of 21.97 recorded by his teammate Kavian Kerr in the preliminary round.

Richard Nelson of Clarendon College accounted for the Class 3 200 metre record, winning the final in 23.11 to erase the previous mark of 23.37 set in 2016 by Glenmur High's Zidane Brown.

In the Digicel Grand Prix 400 metre event, Vere Technical's Nickesha Pryce took the Girls' Class 2 final in 54.00 seconds, must faster than the previous record of 54.99 set in 2016 by Sanique Walker.

In the Digicel Grand Prix 100 metres, Edwin Allen High's Tia Clayton powered home to easily win the Girls' Class 3 final in a record 11.83 seconds to beat Saskieka Steele, who clocked 11.97, which equalled the previous mark established by Ray-donna Lee in 2015.

In the Digicel Grand Prix Boys' Class 2 long jump, St Jago's High Kavion Kerr produced a record effort of 6.89 metre to easily win the final. The previous record of 6.50 metres was held by Ryan Brown of Old Harbour High in 2015.

Apart from Javari Thomas' meet record run in the  Boys' Class 2 200 metre, St Jago High also featured in four other new marks on their way to retain the championship title.

Granville smashed the Boys' Class 2 110-metre hurdles record in the final with a 13.91 clocking, which bettered the previous  mark of 14.27 set in 2017 by his teammate Clinton Simmonds.

Clarke was responsible for the Boys' Class 1 800 metre record again, winning the final in one minute 52.08 seconds to erase his previous mark of one minute 52.46 seconds done in 2017.

Chambers, as expected, smashed the Boys' Class 3 record in the final with a two minutes 02.74 clocking to erase the previous mark of two minutes 06.02 seconds achieved by Spaldings High's Omario Windett in 2017. 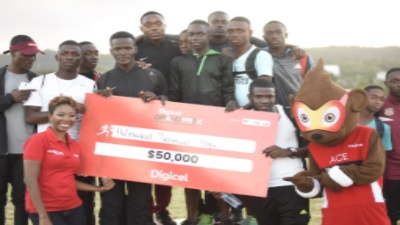 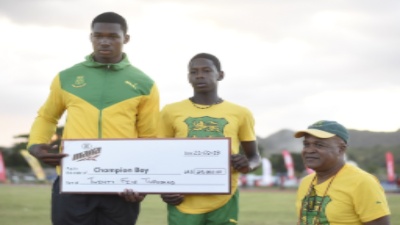 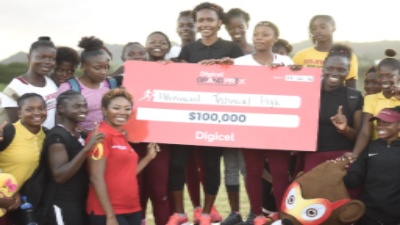