The combination of photos show athletes from Calabar High (left) and Excelsior High posing with their cheques after the schools won the boys and girls' titles at the Digicel Corporate Area Championships, at the National Stadium on Friday. (PHOTO: Marlon Reid).

Calabar High and Excelsior High easily won the boys and girls' titles at the 2018 Corporate Area Championships, the second regional meet of the Digicel Grand Prix Series, at the National Stadium on Friday.

The two-day meet produced  17 records on the final day to bring the total of new marks to 23 and Calabar and Excelsior featured in those moments on their way to championship honours.

In topping the male team scores Calabar High, in the process, dethroned the 2017 champions Kingston College, while it was back-to-back titles for Excelsior High.

Excelsior won the girls' championship with 342 points, 95 ahead of Wolmer's, which won the battle for second place over The Queen's School. Wolmer's compiled 247 points to hold off The Queen's School by a point.

Immaculate Conception High (218) and St Andrew High (189) round off the top five in the female team scores.

Digicel presented cash prizes to the top three finishers (boys and girls). Calabar and Excelsior were each presented with  $250,000. KC and Wolmer's Girls walked away with $100,000 each, while JC and The Queen's School received  $50,000 each.

The highlight over the two days came from the Calabar High's 4x400-metre relay team, which turned in an awesome performance in the final event  to shatter the meet record.

The time also represents the fastest ever recorded by a Jamaican High school team and is also a world high school record.

Jamaica College set the previous Jamaican high school record 21 years ago at the Mutual Life Game at the National Stadium. The quartet of Rudolph Mighty, Edward Clarke, Carl McPherson and Rupert Eldemire clocked 3 minutes 06.56 seconds then to set the record.

With Kingston College (KC) failing to show for the final, Calabar  were unchallenged throughout and won by a huge gap. Excelsior finished in second place in 3 minutes 16.28 seconds, while Papine ended third in 3 minutes 22.49 seconds.

The 4x400-metre relay is one of the 10 Digicel Grand Prix events.

There were two records among the relay victories.

Those record came in the Boys' Class 1 4x100-metre relay and the 1600-metre sprint medley, which is also a Digicel Grand Prix event.

There was also a record performance in the girls' relays as Wolmer's outclassed the field to set a new time in the Class 4 4x100.  The winning time was 49.12 seconds and it erased the previous record of 49.36 set in 2017 by Camperdown High,

Young Class 2 sprint hurdler Britany Anderson, who is conditioned by Raymond 'KC' Graham and has been competing with Class 1 athletes this season, was also in record breaking form.

Anderson, who competed for Vere Technical last year, and now representing Camperdown High proved a cut above Class 1 sprint hurdlers on the day, winning the 100-metre hurdles final in 13.64 seconds to erase the previous record of 14.08 done by Rushelle Burton in 2016.

Daszay Freeman of The Queen's School came in second in 13.80 and Jada Thomas of Immaculate was third in 13.96, both also beating the previous record.

In the morning session, eight meet records were broken. 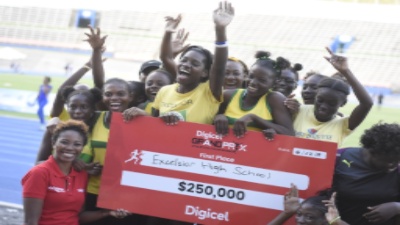 Calabar High accounted for three of the records in that segment, including one from their star athlete Christopher Taylor, who had to dig deep to stave off a fast-finishing KC's Dashawn Chambers in the Boys' Class 1 400 metres, one of the Digicel Grand Prix event,

Taylor clocked 45.84 seconds for the victory, erasing the 48.36 seconds recorded by Kemps Hill High's Marco Doodnaughtsingh in 2016.  Chambers also lowered the previous mark with a 45.93 clocking.

Malik James-King stamped his authority in the Boys' Class 1 400-metre hurdles to hand Calabar High their second record in the session. James-King won the hurdles event in 51.10 seconds to erase his own mark of 52.30 achieved in 2017.

And Calabar's Evaldo Whitehorne outclassed the field to set a new record in the Boys' Class 2 400  metres in 47.41 seconds, beating Shanthamoi Brown of KC, who clocked 48.54. The previous mark was recorded by Calabar High's Anthony Carpenter, who posted 48.89.

KC accounted for two records in the session.

One of KC's record came from their impressive Class 2 400-metre hurdler Shanthamoi Brown, who won the Digicel Grand Prix event in 52.66 seconds. The time erased the previous mark of 57.02 set in 2017 by KC's Davion Williams.

Dean Clarke of Calabar High finished second in 52.97, a time which also bettered the previous mark.

KC's other meet record came from Christopher Seaton, who took the Boys' Class 3 high jump with an effort of 1.80 metres, in another Digicel Grand Prix event. The effort erases  the previous meet record of 1,75 metres, which was held jointly by Devonte Bancroft (2014) and Corey Ottey (2017).

It was a one-two finish for KC with Anthony Willis clearing 1.70 metres for second place. The KC pair beat Calabar High's Xavier Codling, who cleared 1.65 metres.