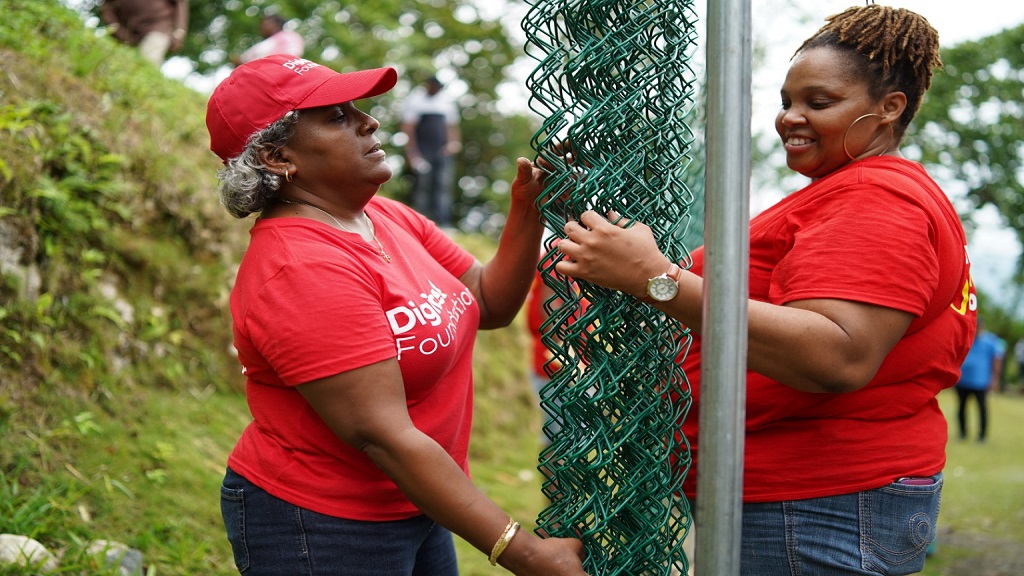 Karlene Dawson, Chief Executive Officer of the Digicel Foundation, and Jadine Lovelace, Digicel Customer Care Agent unfurl a roll of fencing to secure the school grounds. This was one of two 2019 Labour Day projects in which Digicel Foundation volunteers were actively engaged and kept busy.

Some of Jamaica’s youngest citizens were among those benefiting from two Digicel Foundation Labour Day projects this year.

The foundation and its army of volunteers went to work at Wilmington Basic School in St Thomas and Ebony Vale Community Centre in St Catherine to upgrade buildings and secure premises in keeping with the theme for Labour Day 2019: “Child Safety…it’s you, it’s me, it’s all ah we.”

Just three miles away from the Morant Bay capital of St Thomas, volunteers erected a much-needed perimeter fence, constructed steps and installed new doors and windows to make Wilmington safer for the little ones.

At the same time, another crew was busy demolishing worn building parts before renovating bathrooms, painting classrooms and outdoor spaces, and installing several windows and doors to make the Ebony Vale Community Centre more secure. Both renovations were completed at a cost of $1.63 million.

Overwhelmed by the Digicel Foundation’s support, Chairman of the Wilmington Basic School, Dennis Maragh, commented that the renovation work “will go a far, far way” towards the further development of the school and its students. Founded in the late 1990s as a part of the Wilmington Primary School, which is on the same compound, the Basic School was registered as an Early Childhood Institution fifteen years ago. It has continued to upgrade its premises, renovating and occupying the Primary School’s teachers’ cottage.

The school caters for 45 children from Wilmington and the communities of Red Hill, Lyssons and Morant Bay. Mr Maragh paid tribute to the school’s principal, Tamika Edmondson, parents and teaching staff who wholeheartedly turned out to help. “I wish to express my appreciation to the parents and staff for their cooperation and support over the years,” said Maragh, also paying tribute to the Principal of the Primary School, Andrew Chambers.

Member of Parliament for Eastern St Thomas, Dr Fenton Ferguson, joined the activities and lauded the Digicel Foundation for this latest round of improvements to vital social infrastructure in the parish.

He commented, “I believe that the Digicel Foundation is getting it right by coming here and taking on this project. We are extremely impressed, not just for what happened here at Wilmington, but we have been the beneficiaries of a computer lab at Duckensfield Primary, and only last year the foundation upgraded the Centre of Excellence at Lyssons.”

Chief Executive Officer of the Digicel Foundation Karlene Dawson noted, “Through the work of both teams, we aren’t just producing secure and comfortable areas for young people to play, learn and thrive, we are helping to improve the surrounding communities that depend on these facilities. With the selection of these two institutions, we continue to make good on our promise to the community.”

She added that the overwhelming spirit of volunteerism made a big difference: “As in previous years, it is cooperation and mutual support that makes things happen, and we are very thankful for the large outpouring of support. This is in the true spirit of Labour Day for us at Digicel Foundation.”