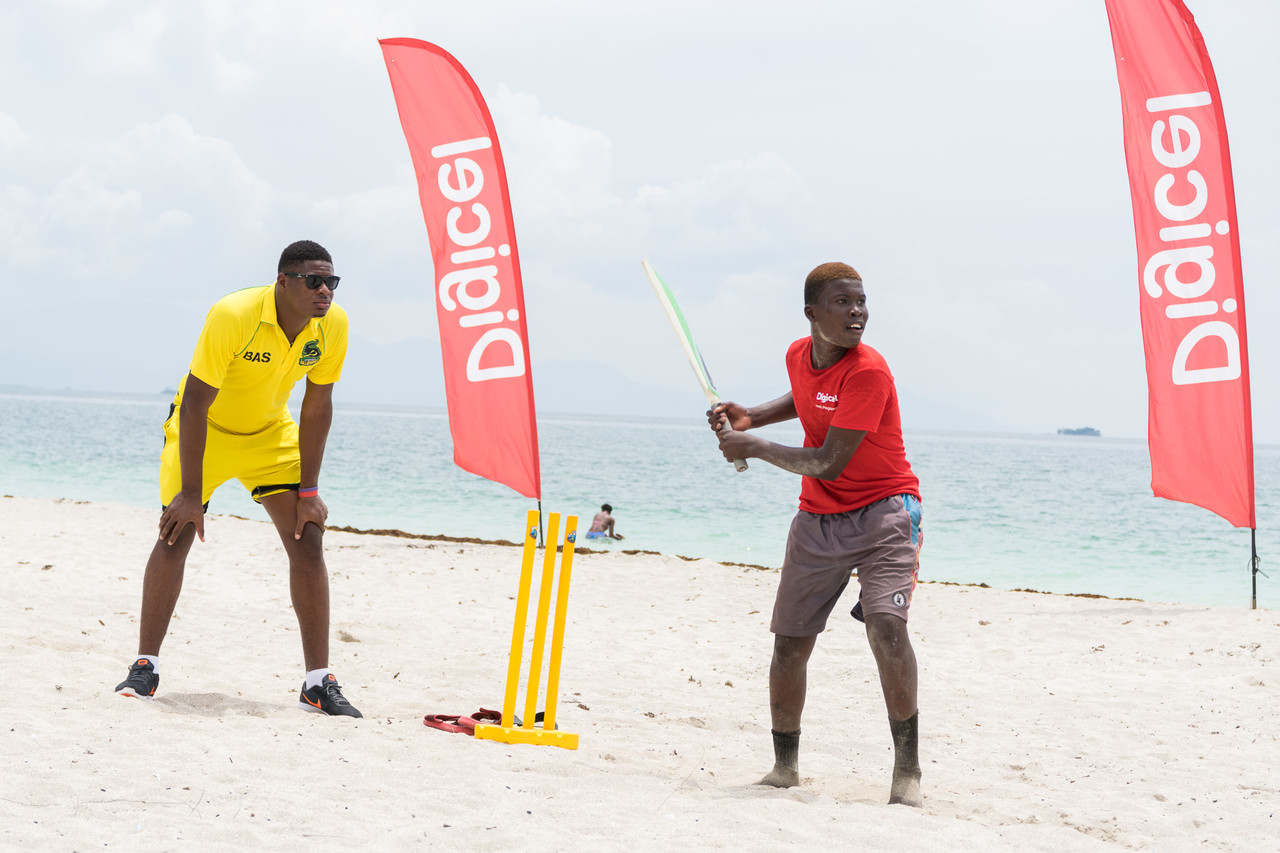 The only thing that could make the perfect summer beach day even better for any young cricketer from the Boys Town Sports Club would be to meet and play the good game with their favourite pros.

And that’s exactly what they did on Monday, August 28 at Fort Clarence Beach in St. Catherine—in between matches for the Hero CPL 2017 Tournament, Digicel hosted members of the Jamaica Tallawahs team members and fifteen youngsters from the Boys Town Cricket Team for a mid-morning training session and friendly game in the sand, much to the delight of the boys and their coaches.

He continued, “So getting the chance to meet them, train with them and listen to them talk one-on-one about what it’s like playing professional cricket will go a far way in motivating them and inspiring them to pursue worthwhile careers in the sport.  Some of them want to bat like Trevon Griffith or bowl like Odean Smith so being able to see them in person and even spend a little time with them will be something they’ll never forget.  So we’re really thankful to Digicel and the Jamaica Tallawahs for making this happen for the boys.”

Following an intense training session which covered batting and bowling techniques, game strategy and sportsmanship, the group of fifteen boys quickly then squared off in a friendly match against the Tallawahs players, which included bowlers Odean Smith and Oshane Thomas, as well as batsmen, Kennar Lewis and Trevon Griffith.

“Today was amazing!  I learnt a lot, especially from Trevon Griffiths and Odean Smith, who showed me a new way to bowl.  Doing this just helps to confirm that I really want to pursue my dream of becoming a physiotherapist for the West Indies cricket team.  I love the sport of cricket and really love Science and it would be a combination of my two favourite things,” Warick Watson, 17 shared

Cricketers take to the beach

Opening batsman Trevon Griffith noted, “So many of these youngsters show so much potential and talent. It was truly an honour and a pleasure to work with them in this way and get a chance to give back to the community. I really hope that I was able to inspire some of them and teach them something that they can make use of in the future.  Speaking of which, I’m really looking out for some of these guys in a few years; with this kind of talent, I’m sure they’re going to be keeping the sport of cricket alive.”

Cricket on the beach was the second coaching activity in the Digicel CPL/Youth Programme for 2017.  The first phase, dubbed ‘Big Brother’ took place in July, and saw the Tallawahs team members, along with their coach, Paul Nixon, hosting a mentorship/training session for some of Jamaica’s top young cricketers at Sabina Park in Kingston.

With one victory secured against the St. Lucia Stars so far, the Jamaica Tallawahs will aim to bounce back from their loss against the Trinbago Knight Riders with two final clashes on home soil. These games will bowl off at Sabina Park on Wednesday, August 30 against the St. Kitts and Nevis Patriots and on Friday, September 1 against the Guyana Amazon Warriors.

PHOTOS: Plenty of excitement as CPL returns to Sabina Park