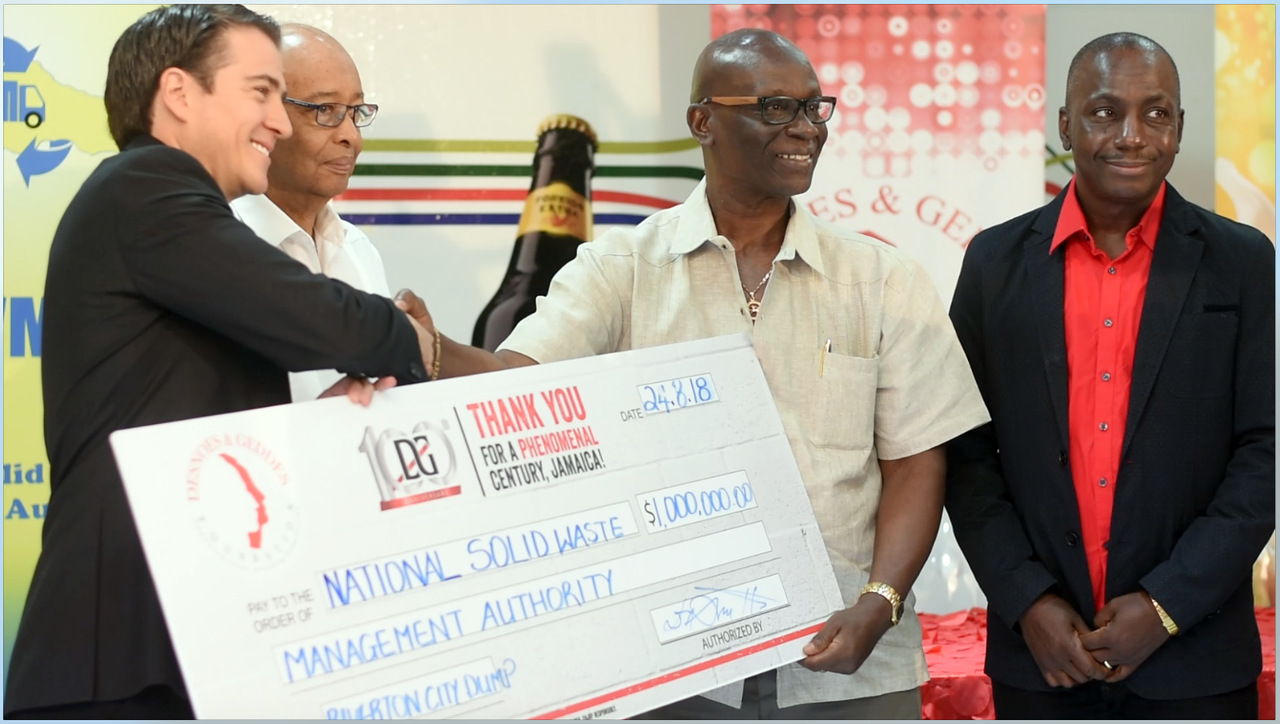 Managing Director of Red Stripe, Ricardo Nuncio (left), hands Minister of Local Government, Desmond McKenzie (second right), the symbolic cheque of $1 million that the Desnoes and Geddes Foundation presented to the National Solid Waste Management Authority (NSWMA) on Friday. The money will go towards the purchase of cameras to be installed at the Riverton landfill in St Andrew. Also pictured (l-r) are Noel daCosta, Chairman of D&G Foundation, and Audley Gordon, Executive Director of the NSWMA.

The Desnoes and Geddes Foundation on Friday handed the National Solid Waste Management Authority (NSWMA) $1 million for the acquisition of surveillance cameras for use at the Riverton City landfill.

According to Nuncio, the presentation forms part of Red Stripe's ‘100 gifts for 100 years’, a tagline the company has been using to celebrate being in operation for exactly a century. He also said it was an effort by the company to minimise the risks from fires at the landfill and resultant situations outside the company's control.

Nuncio said, "what we really wanted to do, is how can we support, to have a bit more certainty around the complex and our surroundings.

Watch the video by Marlon Reid.

According to him, the money is to go towards camera equipment that will be installed at the Riverton landfill to add to the enhanced security for the facility that the NSWMA is presently working on.

McKenzie, while congratulating Red Stripe on celebrating 100 years and contributing to the island in various ways, said the landfill has had a dismal record with fires over a number of political administrations.

He said the present Administration will not cast blame on those before, but will take full responsibility for the Riverton landfill, as well as the Retirement landfill in St James, which both burned last month.

He questioned the rationale of using $150 million to put out the fires, instead of having it to deal with other issues that the country is facing.

McKenzie, however, said the NSWMA has put in place a number of security features to prevent such fires at landfills across the island. He said some will be noticeable, with others not very apparent.