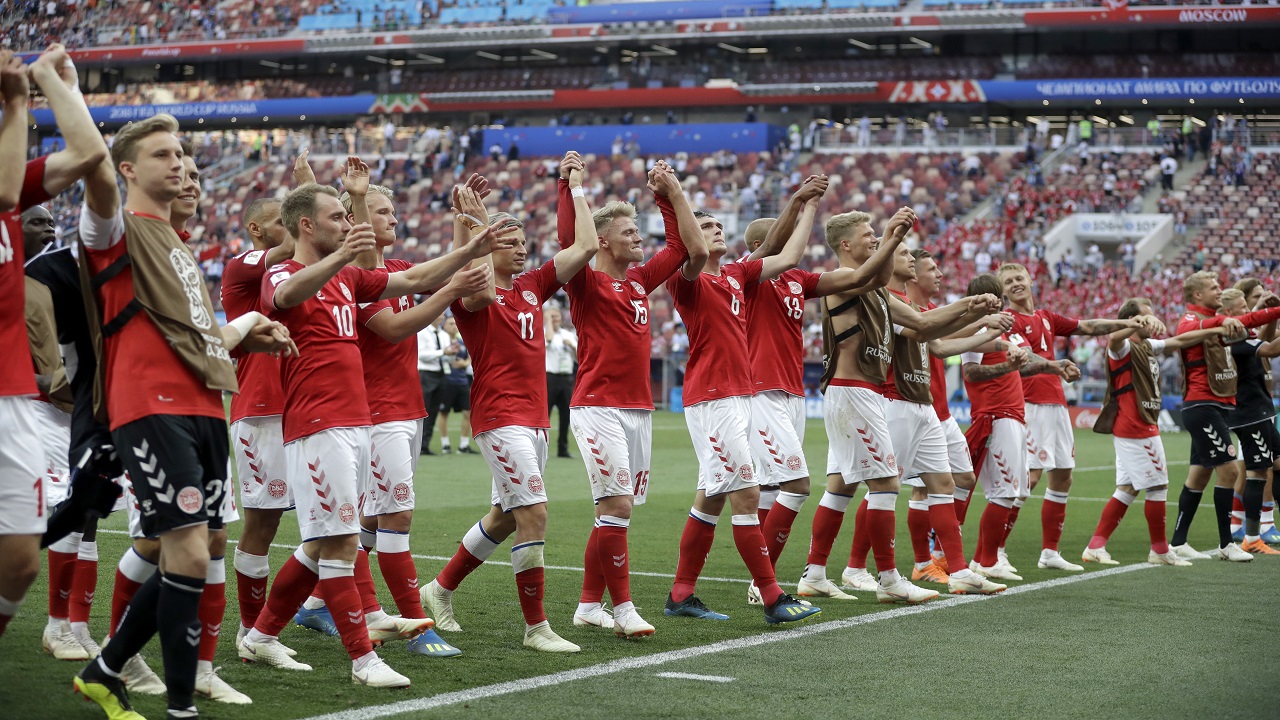 The Danish team as a group celebrate in front of their fans after the end of the group C match between Denmark and France at the 2018 World Cup at the Luzhniki Stadium in Moscow, Russia, Tuesday, June 26, 2018. The game ended 0-0 . (AP Photo/Matthias Schrader)

A game no team needed to win became the game no fan would want to watch.

France and Denmark produced the World Cup's first 0-0 draw at the 37th attempt amid boos and whistles from fans on Tuesday.

The slow-paced game was out of step with a vibrant tournament. But it advanced both teams to the round of 16 unbeaten, with the bonus of no players suspended and no serious injuries. France will now play Argentina, and Denmark faces Croatia.

The draw would always have ensured that outcome, and became inevitable in the second half. Events elsewhere in Group C made this game all but irrelevant.

Peru beat Australia 2-0 in Sochi at the same time, meaning the Danes would have advanced even if they lost to France before 78,011 at the World Cup's signature Luzhniki Stadium.

"We did what we needed," Denmark coach Age Hareide said, praising his team for a disciplined display. "We would have been stupid to open a lot of space for the French team."

France was already sure to advance with two opening victories, and this result spread the happiness to Denmark and its thousands of fans who stayed to dance and cheer in an empty stadium.

Less happy were the neutral fans in the crowd. Many Russians cheered the host team's name and whistled misplaced passes and slow play as the game progressed with Denmark protecting its one point for a draw.

It was the longest a World Cup had gone without a goalless draw since 1954, a tournament of 26 games which all delivered at least one goal.

"We didn't have to take risks to get better because this result was good for everyone," France coach Didier Deschamps said.

It was a mostly forgettable first major tournament start for France goalkeeper Steve Mandanda, who has been a backup at two World Cups and three European Championships. The 33-year-old made his only save in the 54th minute, spilling Christian Eriksen's free-kick before pouncing on the loose ball.

France's first-choice goalkeeper and captain, Hugo Lloris, was among those given the day off. Midfielders Paul Pogba and Blaise Matuidi were obvious choices to sit after collecting yellow cards in a 1-0 win over Peru. A second yellow card before the semifinals triggers a one-game ban.

"I want to have all my choices in the round of 16," Deschamps said. His team lost rhythm with a different trio of attacking midfielders to support Antoine Griezmann and Olivier Giroud.

Perhaps sensing it was time to make entertainment midway through the first half, fans created a wave that made three laps of the stadium.

Whistles and jeers got louder after a misplaced pass in the 64th by France midfielder Thomas Lemar went off the field 10 yards (meters) away from any player.

Only in the final 20 minutes, when Fekir and Kylian Mbappe came off the bench, did France show more pace and direct intent. They met a solid Danish defense content with the draw.

Denmark has a tough defense anchored by veteran captain Simon Kjaer, and a high-class goalkeeper in Kasper Schmeichel. Even the top World Cup teams will have difficulty scoring against the Danes.

France has won Group C and will open the round 16 on Saturday afternoon in Kazan, playing Group D runner-up Argentina.

Denmark gets an extra day off and plays Group D winner Croatia on Sunday evening in Nizhny Novgorod.

"The team that only got three points, Peru, probably played the best in our group," Denmark coach Hareide, happy to advance from a tough pool.

Messi, Argentina scrape into round of 16 with 2-1 win over Nigeria