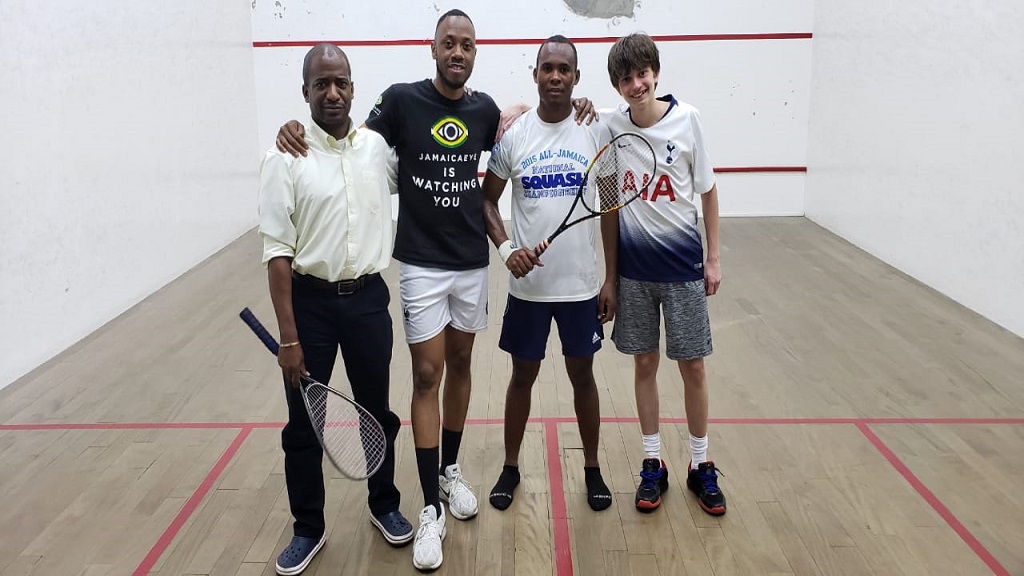 Members of the Adams Family who beat the Screaming Eagles in the quarter finals of the 2019 KPMG Squash League at the Liguanea Club on Tuesday, March 12. (From left) are Adam Lee, Robert Roper, Allan Roper and Adam Hugh.

Defending Champions, the Cereal Killers and last year’s runners up, the Saints were both knocked out of the 2019 KPMG Squash League in the quarterfinals, which were held at the Liguanea Club in Kingston on Tuesday.

New entrants, the Power Bolts toppled the 2018 winners to continue their swift charge towards the championship.  Reigning All Jamaica Under 13 boy' champion, Aman Dhiman put the Power Bolts ahead when he fought off the determined Noah Ho-Tai 21/16, 21/20, 14/21, 21/19.

Then junior national team player, Mia Todd defeated Karan Chatani 21/15, 21/13, 21/20 to take the Power Bolts to the semifinals.  All Jamaica Under 15 boys' champion, Tobias Levy put the Cereal Killers on the scoreboard by beating All Jamaica and Caribbean Under 13 girls' champion, Savannah Thomson 21/10, 21/11, 21/13 but it was not enough to stave off elimination.

In contrast, three-time winners the Milex Eagles remained on course to retake the title after defeating Three Plus 1.  Former junior national champion, Tahjia Lumley went the distance to beat Andrew Shim 21/19, 20/21, 21/18, 16/21, 23/20 which put the Eagles ahead.

Tournament Director, Nathlee Boreland said, “the quarter-finals brought two major upsets with both teams that were finalists last year getting knocked out of the competition, but that’s the exciting thing about a handicap tournament, not even the best players can take anything for granted.”

The semifinals are set for Tuesday, March 26 at the Liguanea Club. The Milex Eagles will be up against the Adams Family, while Tech A Chance will face off with the Power Bolts.

Top seeds sail into semifinals of All Jamaica Squash Championships