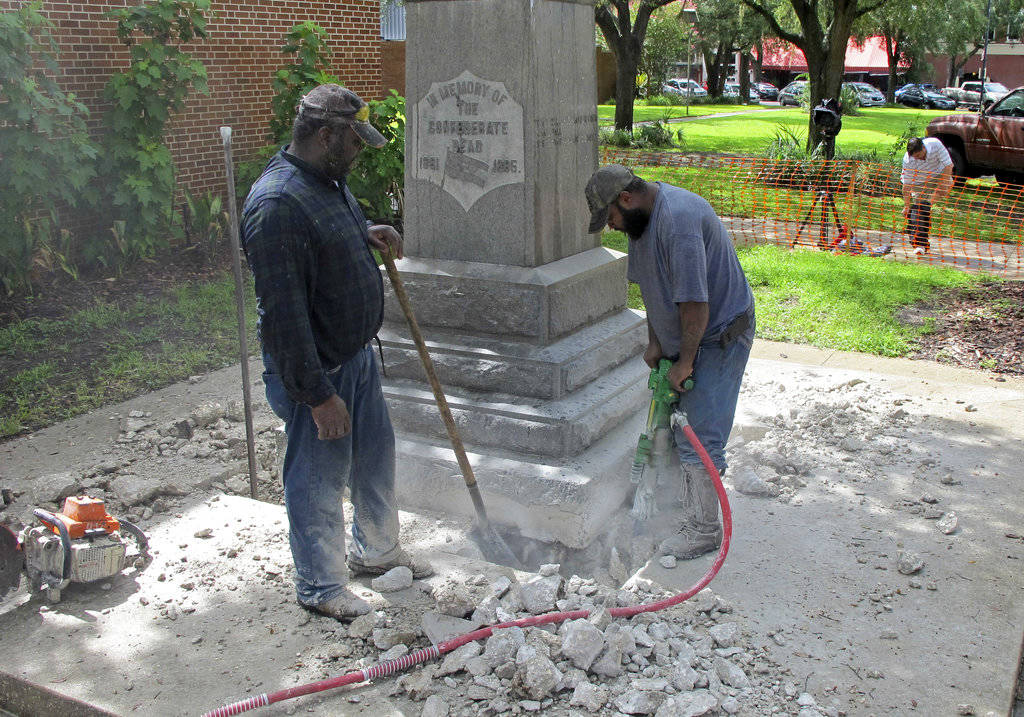 Workers begin removing a Confederate statue in Gainesville, Fla., Monday, Aug. 14, 2017. The statue is being returned to the local chapter of the United Daughters of the Confederacy, which erected the bronze statue in 1904. County officials said they did not know where the statue would be going. (AP Photo/Jason Dearen)

In Gainesville, Florida, workers hired by the Daughters of the Confederacy chipped away at a Confederate soldier's statue, loaded it quietly on a truck and drove away with little fanfare.

In Baltimore, Mayor Catherine Pugh said she's ready to tear down all of her city's Confederate statues, and the city council voted to have them destroyed. San Antonio lawmakers are looking ahead to removing a statue that many people wrongly assumed represented a famed Texas leader who died at the Alamo.

Some people refused to wait. Protesters in Durham, North Carolina, toppled a nearly century-old statue of a Confederate soldier Monday at a rally against racism. Activists took a ladder up to the statue and used a rope to pull down the Confederate Soldiers Monument that was dedicated in 1924. A diverse crowd of dozens cheered as the statue of a soldier holding a rifle fell to the ground in front of an old courthouse building that now houses local government offices.

The deadly white nationalist rally in Charlottesville, Virginia, is fueling another re-evaluation of Confederate statues in cities across the nation, accelerating their removal in much the same way that a 2015 mass shooting by a white supremacist renewed pressure to take down the Confederate flag from public property.

"We should not glorify a part of our history in front of our buildings that really is a testament to America's original sin," Gainesville Mayor Lauren Poe said Monday after the statue known as "Old Joe" was returned to the United Daughters of the Confederacy, which erected it in 1904.

A county spokesman said he did not know if the statue was removed because of the events that killed one person and injured dozens more Saturday in Charlottesville. But many officials who were horrified by the confrontation soon began publicizing plans to take down statues.

The Southern Poverty Law Center last year counted more than 1,500 things around the country named after Confederate figures or dedicated to the Confederacy, including holidays, statues, flags and the names of cities, counties, schools and parks. Nearly half are monuments, which are in 24 states. Most of the dedications are in the South, but 24 are in the North and 21 in states that did not exist at the time of the Civil War.

In Jacksonville, Florida, City Council President Anna Brosche ordered an immediate inventory of all of the Confederate statues in her city in preparation for their removal.

"These monuments, memorials and markers represent a time in our history that caused pain to so many," she said Monday.

Lexington, Kentucky, Mayor Jim Gray moved up his announcement by a day in reaction to the weekend bloodshed. Memorials to John C. Breckinridge and John Hunt Morgan are perched outside a former courthouse that was the site of slave auctions before the Civil War.

San Antonio Councilman Robert Trevino is promoting a measure that would remove the Confederate statue at the center of Travis Park, where for years people have mistakenly identified the figure as being that of Col. William Travis, a Texas hero who died at the Alamo.

"This is not an important art piece, but a monument to power. It was put in to remind people of that power. It is an unfortunate message of hate, and we think it's important to relocate it." Trevino said Monday. "We do think that history is important so we're looking for an appropriate location for it."

St. Louis dismantled its Confederate Monument in Forest Park in June, giving it to the Missouri Civil War Museum after years of debate.

In Baltimore, Pugh announced Monday that she would move forward with the removal of Baltimore's statues of Roger B. Taney, a Marylander who wrote the 1856 Dred Scott supreme court ruling that denied citizenship to African-Americans, and a statue of two Virginians, Confederate generals Robert E. Lee and Thomas "Stonewall" Jackson.

Pugh said she was making plans to send the statues to cemeteries with Confederate dead outside the city. But hours later, the city council voted unanimously to have the statues destroyed instead of moved. It was unclear whether anything would happen to the statues immediately.

Seconds after the monument fell in Durham on Monday, protesters began kicking the crumpled bronze monument.

In response, Democratic North Carolina Gov. Roy Cooper tweeted: "The racism and deadly violence in Charlottesville is unacceptable but there is a better way to remove these monuments."

Back in May, New Orleans Mayor Mitch Landrieu moved his city's four main Confederate statues, including a statue of Lee, at night after threats of violence from Confederate sympathizers and white supremacists. Pugh said she is consulting with Landrieu, now head of the U.S. Conference of Mayors, about the removal of Baltimore's statues and the cost.

The violence in Charlottesville will probably speed up efforts to do away with the monuments, experts said.

The convergence of white nationalists and neo-Nazis with Confederate imagery in Charlottesville will make it difficult for government agencies to defend having Confederate statues on their property, Boston University history professor Heather Cox Richardson said.

"The idea that this somehow is about Southern heritage, I think that ship sailed," said Richardson, who teaches and writes about the Civil War, Reconstruction and Southern politics.

Photos of gunman Dylan Roof, who fatally shot nine black churchgoers in South Carolina, showed him with a Confederate flag and triggered a swift "sea change" in perception of the banner, Hood said.

Then-South Carolina Gov. Nikki Haley successfully led calls to bring down a Confederate flag that had flown on Statehouse grounds for 54 years. Other cities and organizations began accelerating their removal of Confederate imagery following Roof's arrest.