Dacres, Russell the favourites for National Sports Awards on Friday 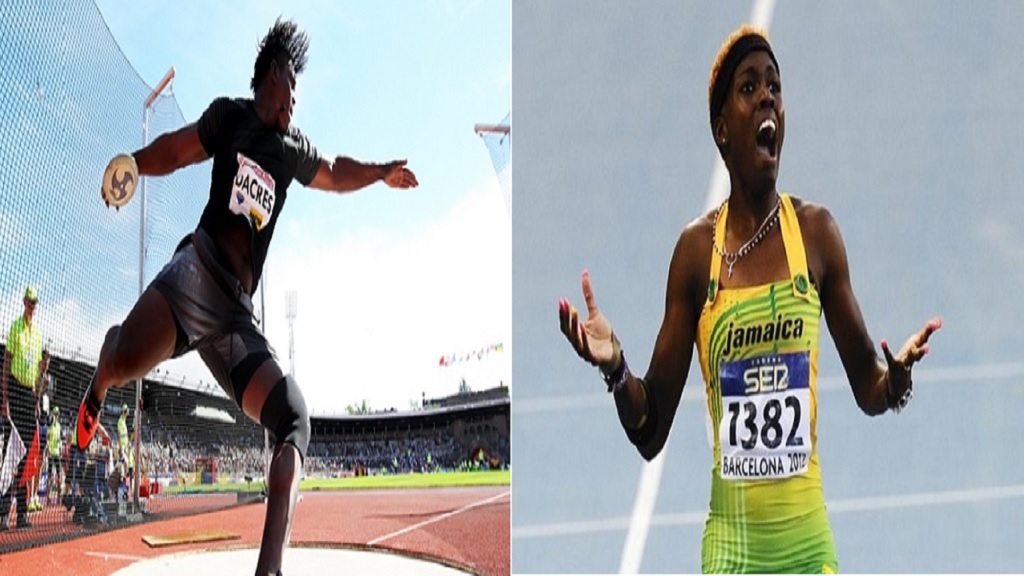 Discus thrower Fedrick Dacres and 400-metre hurdler Janieve Russell are the big favourites to be named as the 2018 RJRGleaner National Sportsman and Sportswoman of the Year on Friday.

The announcement will be made at a gala ceremony, which will take place at the Jamaica Pegasus hotel, starting at 7:00 pm.

Dacres, 24, and Russell, 25, are among a list of 15 nominees for the prestigious awards.

Joining Dacres among the men’s nominees are sprint hurdlers Hansle Parchment, a late addition to the list, and Ronald Levy along with shot putter O’Dayne Richards and squash player Christopher Binnie.

Dacres was arguably the country’s top sportsperson for 2018 and should easily walk away with the Sportsman of the Year Award.

Dacres had one of his best years in 2018 where he had a trio of major wins.

He won the discus gold medal at the Commonwealth Games on the Gold Coast in Australia in a Games Record 68.20m on April 13. He followed up that victory by claiming the Diamond League discus title and US$50,000 at the Memorial Van Damme in Brussels on August 31 with a throw of 68.67m and then beat the world at the IAAF Continental Cup in the Czech Republic on September 8 with a throw of 67.97m.

Dacres also won gold at the NACAC Senior Championships in Toronto on August 12. He improved the championship record by more than five metres with his opening throw of 65.89m. He improved to 67.39m in the second round and ended with 68.47m, his fifth best effort ever.

For the Sportswoman of the Year award, Russell only challenge should come from swimming sensation Alia Atkinson.

Atkinson, the reigning Sportswoman of the Year,  had another sensational season in the pool in 2018.

The 30-year-old earned Jamaica’s first medal at the Commonwealth Games on the Gold Coast in Australia with a silver in the 50m breaststroke on April 6.  Atkinson clocked 30.76 seconds, just under a fifth of a second to the gold medal winner Sarah Vasey of England, who won in 30.60 seconds

Then at the 23rd Central American and Caribbean (CAC) Games at the Eduardo Movilla Aquatic Complex in Colombia, Atkinson won three gold medals.

Atkinson’s third gold in Colombia came on July 22 when she clocked 30.19 seconds for victory in the women's 50-metre breaststroke final, distancing herself from Melissa Rodriguez Villanueva of Mexico, who took silver in 31.20 seconds and Venezuelan Merce des Toledo, who timed 31.99 for third and the bronze medal.

Atkinson’s other gold medal in Colombia came in the women’s 50m butterfly in 26.60 seconds and the women’s 100m breaststroke in a championship record 1:06.83.

At the FINA Swimming World Cup, Atkinson dominated her competition in the 25-metre pool. In five meets she won three gold and two silver medals in the 100-metre breaststroke and all five in a clean sweep of the 50-metre breaststroke.

Russell won two major titles in the year. Those titles came at the Commonwealth Games on April 12 when she crossed the line in 54.33 and at the IAAF Continental Cup in Ostrava, Czech Republic on September 9 when she won in 53.62.

Atkinson is also among five nominees for the People’s Choice “Performance of the Year,” with her new 50-metre breaststroke world short course record swim of 28.56 seconds, at the FINA Swimming World Cup meet in Budapest, Hungary on October 6.

The other nominees are the Reggae Girlz, who on October 17 created history in the United States by becoming the first Caribbean team to reach the FIFA Women’s World Cup; Andre Russell for his catch for the Jamaica Tallawahs against the Trinbago Knight Riders in their Caribbean Premier League match at the Queen’s Park Oval on August 10; 16-year-old Briana Williams for her victory in the 100-metre final at the IAAF Under-20 World Championships in Tampere, Finland and Nico Yeyo, for his savage assault on Myron Zeferino which gained him a stunning technical knockout victory in the first 21 seconds of their Wray and Nephew Contender welterweight bout.