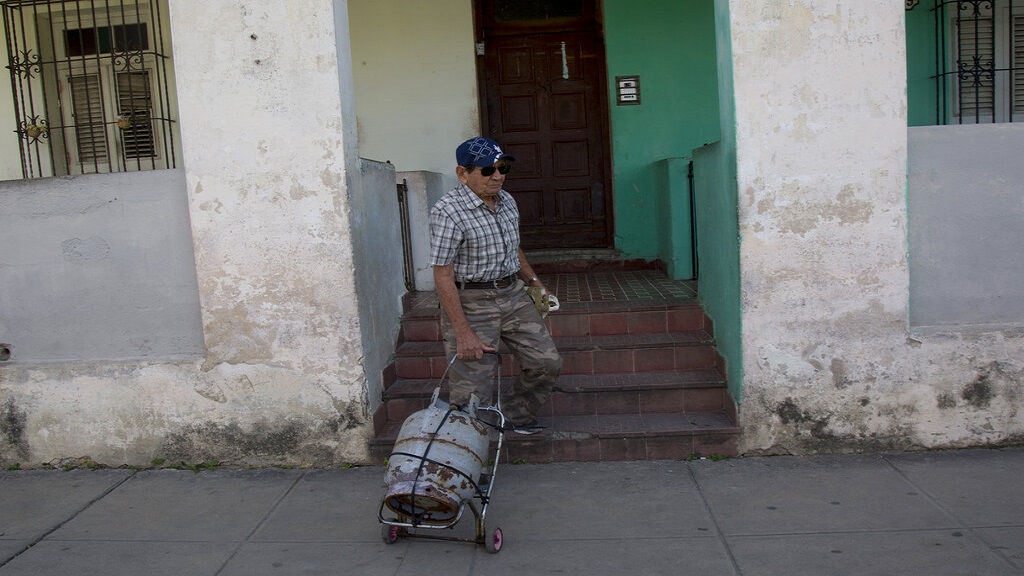 Alberto Perez, a 77-year-old retired man, leaves his home in the Sevillano neighborhood with an empty cooking gas tank as he departs for a shop where he will replace it with a full one in Havana, Cuba, Tuesday, Jan 14, 2020. The Cuban government is warning citizens to prepare for shortages of cooking gas due to Trump administration sanctions on the island. (AP Photo/Ismael Francisco)

The Cuban government is warning citizens to prepare for shortages of cooking gas due to Trump administration sanctions on the island.

State media announced Tuesday morning that cylinders of liquid petroleum gas would be scarce for Cubans who buy state-subsidized gas at about 30 cents per cylinder as well as for customers who buy gas at market prices more than 10 times higher.

Many homes in Cuba depend on bottled gas because they are not connected to municipal gas lines. Electric stoves and hotplates are relatively rare and expensive to use due to high electricity prices.

“I'll have to adapt, use an electric cooking pot and hope that things get better,” said Angela Leon, a 60-year-old housewife. "It's a great injustice because it's already hard to put food on the table. I hope the U.S. government is aware that what they're doing to us is unjustified.”

The government said in an announcement on state media that a Trump administration sanction announced in November against Cuban state energy company Corporación Panamericana had forced the cancellation of planned purchases of liquid petroleum gas.

“Current inventories don't cover consumption, affecting the sale of subsidized and free-market LPG, which can only be guaranteed for locations that provide basic services to the population," the announcement read. “The people should adopt measures to save gas and use it efficiently.”

The Trump administration has been regularly tightening the trade embargo on Cuba with the stated aim of pressuring the country to give up its close relationship with Venezuelan President Nicolás Maduro, whom the US wants out of office.

The U.S. last week banned charter flights from the U.S. to cities outside Havana, the latest pressure meant to cut off the flow of hard currency and energy to Cuba.

Washington banning US flights to all Cuban cities but Havana