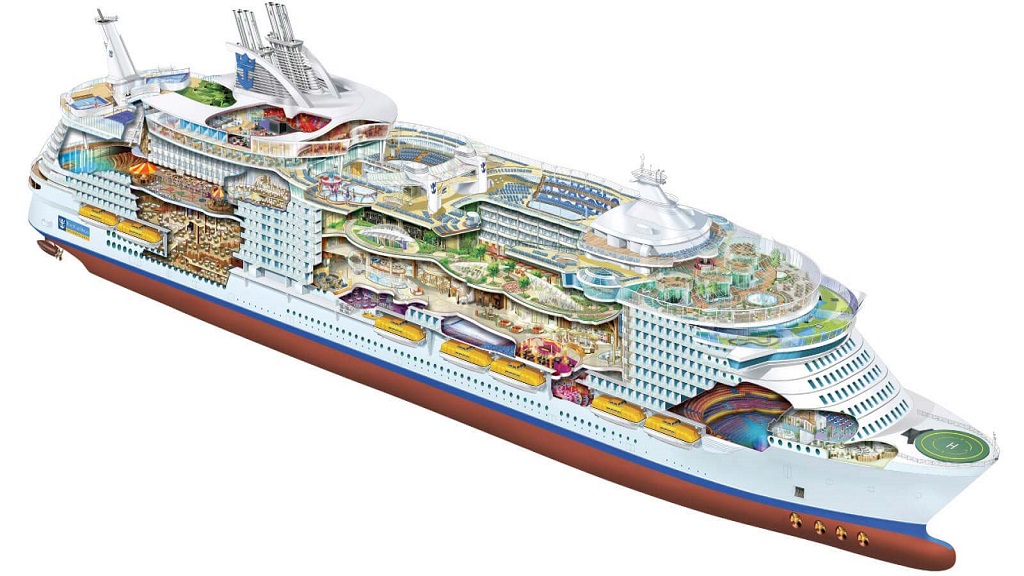 An impression of an Allure of the Seas cruise vessel.

There is a growing trend globally for dangerous selfies, and some individuals are becoming increasingly reckless when it comes to posing for photos to garner massive ‘likes’ from new followers on their social media handles.

One such social media user, a woman who reportedly behaved recklessly when she stood on the railing of a Royal Caribbean cruise ship to pose for a selfie, learnt the hard way about the importance of her own safety.

She ended up being evicted from the cruise ship in Falmouth, Trelawny last week.

Additionally, the woman, who was not named, and her companion who assisted in getting the selfies taken, have been banned for life from all Royal Caribbean cruise vessels.

Photos which have now gone viral after being snapped by a fellow passenger some distance away from the woman out on the railing, showed her in a light blue bathing suit on the outside edge of the Allure of the Seas vessel with her hands over her head.

The frightened passenger, after taking the pictures, reported the shocking development to the ship's personnel as he thought the woman was about to jump from the vessel.

The giant cruise ship was approaching Labadee in Haiti when the incident happened, according to several media reports.

“Earlier this week on the Allure of the Seas, a guest was observed recklessly and dangerously posing for a photo by standing on her stateroom balcony railing with the help of her companion,” Royal Caribbean said in a statement late last week.

It added that “Security was notified and the guests were later debarked in Falmouth, Jamaica as a result of their actions, and are now banned for life from sailing with Royal Caribbean.”

Subsequent reports did not state what happened to the pair after they were left in Jamaica.

But several discussions on social media sites, including Facebook, have evolved in relation to the stance of Royal Caribbean. Some individuals were in agreement, noting that the act was "silly" and could have resulted in the woman's death.

Others, however, have said the cruise line should have given the pair a chance to complete their trip, arguing that they had already paid for it.

But for Royal Caribbean, which already had one reported death from a fall by one of its passengers this summer, it was perhaps time enough to take a strong stance to signal that recklessness on board its vessels will not be tolerated.

In August of this year, while Royal Caribbean's Symphony of the Seas cruise ship was making its way to St Thomas in the US Virgin Islands, an Australian man died after falling overboard. Notably, the fall did not result from the passenger taking a selfie.

In July of this year on another cruise ship, the Freedom of the Seas, also operated by Royal Caribbean, an 18-month-old American toddler plunged from the 11th deck of the vessel while it was docked in San Juan, Puerto Rico.

It therefore appeared that Royal Caribbean could not take another bad publicity on their hands, and opted to remove the woman and her companion to avoid any further stunt on board the vessel.

Royal Caribbean's guest conduct policy, moreover, prohibit passengers from “sitting, standing, laying or climbing on, over or across any exterior or interior railings or other protective barriers, or tampering with ship’s equipment, facilities or systems."

Statistics provided by online website, www.fastcompany.com, proved that dangerous poses for selfies can lead to injuries or death.

The site said, "A 2018 research study counted 259 selfie-related deaths between 2011 and 2017. The mean age was just under 23 years’ old, and an estimated 73 per cent of the victims were males. The most selfie deaths were reported in India, followed by Russia, the United States and Pakistan."

One example of a selfie-related death occurred on June 13, 2018, when a British woman and an Australian fell to their deaths while apparently trying to take a selfie above a popular beach in Portugal.

Authorities suspected the man and woman had been trying to take a picture together when they fell over a wall, or that they could have been trying to retrieve personal possessions that had been dropped.

The pair was found below a 30-metre drop on the Praia dos Pescadores (Fisherman’s Beach), and a mobile phone was discovered on the wall above the beach.