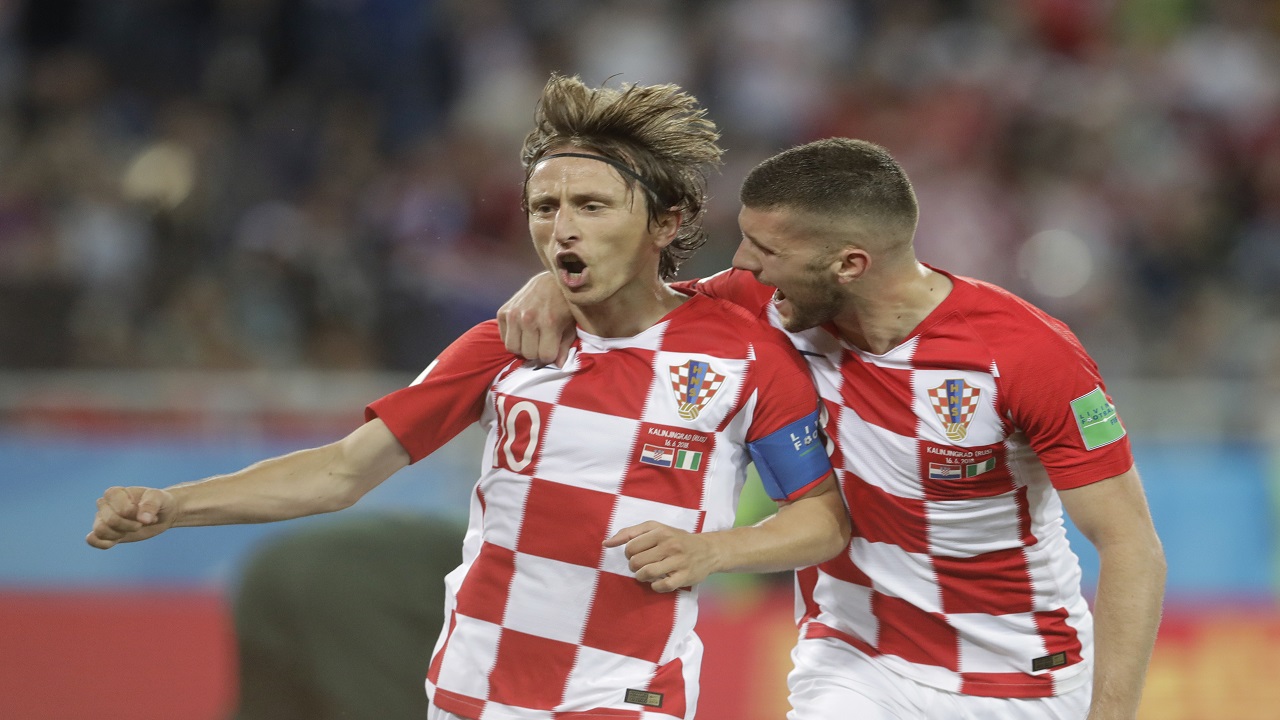 Croatia's Luka Modric, left, celebrates with teammate Ante Rebic after scoring from a penalty spot during the group D match against Nigeria at the 2018 football World Cup in the Kaliningrad Stadium in Kaliningrad, Russia, Saturday, June 16, 2018. (AP Photo/Petr David Josek).

Croatia claimed pole position in Group D of the World Cup in Russia with a hard-fought 2-0 win against Nigeria on Saturday, thanks to an own goal from Oghenekaro Etebo and a Luka Modric penalty.

Midfielder Etebo, who joined Stoke City for €7.2million on Monday, turned a Modric corner into his own net after Ivan Perisic and Mario Mandzukic both flicked the delivery on.

Nigeria's previous goal conceded at the World Cup in 2014 was also an own goal, defender Joseph Yobo the unfortunate player to put through his own net in a last-16 defeat to France.

And when William Troost-Ekong needlessly dragged Mandzukic down in the box, captain Modric coolly converted the 71st-minute penalty to give Croatia a winning start on their fifth appearance at the finals.

Croatia had the better of a close contest light on chances in Kaliningrad, with Mandzukic's aerial power causing plenty of problems for Nigeria, who have the youngest squad at the World Cup.

Gernot Rohr's men were unable to create a clear opportunity of their own and sit bottom of Group D following the first round of fixtures, Argentina and Iceland having drawn in Moscow earlier on Friday after Lionel Messi missed a penalty.

After a cagey opening, Perisic fired Croatia's first shot in the 13th minute, narrowly clearing the crossbar after Mandzukic's strength created the opportunity to shoot.

Perisic and Mandzukic both got a touch on a right-wing Modric corner but the crucial contact came at the back post from Etebo, who could only divert the ball past teenage goalkeeper Francis Uzoho.

Alex Iwobi was proving a lively presence in attack for Nigeria but after wriggling into space on the left side of the box, he hit a shot directly into a Croatia defender.

Rebic should have doubled Croatia's lead, firing over from Perisic's perfect left-wing centre, with Odion Ighalo's tame header recording the match's first shot on target in the 59th minute.

Nigeria's lack of quality in the final third was evident and after Troost-Ekong was penalised for holding Mandzukic in the penalty area, Modric sent Uzoho the wrong way from 12 yards for his first World Cup goal.

A fightback from the Super Eagles never looked likely, Danijel Subasic given a comfortable outing in the Croatia goal with Kelechi Iheanacho and Etebo missing chances to register.

Croatia next face Messi's men on Thursday, while Nigeria are in action the following day against World Cup debutants Iceland.