Criminals stole items belonging to drowning man instead of helping him 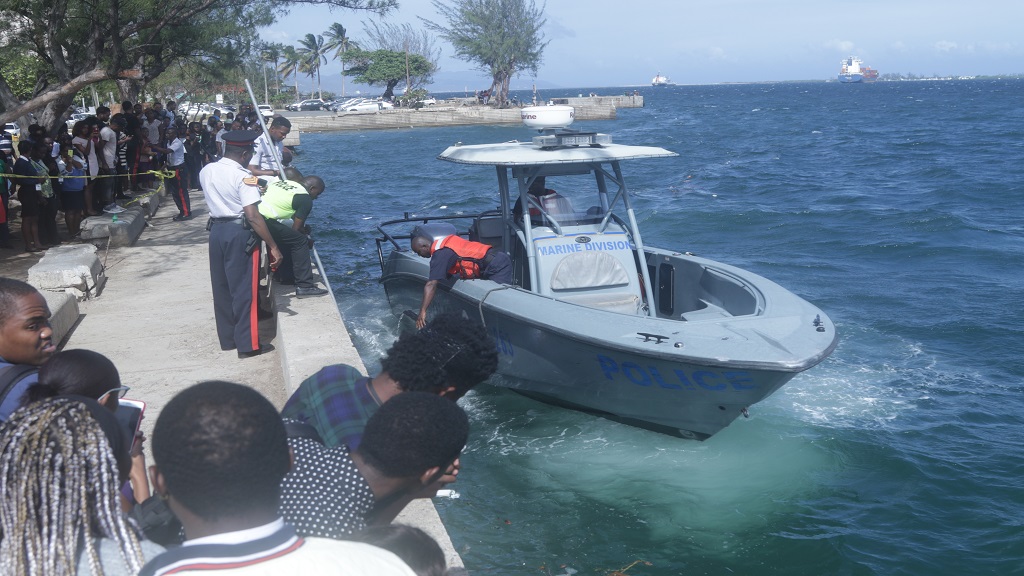 The scene of Tuesday's drowning of a man at the Kingston waterfront amid efforts to recover the body. (Photo: Shawn Barnes)

Criminals in downtown Kingston went to a new low on Tuesday when they stole items from a location on the Kingston waterfront while a man was drowning in the waters below.

The man, who has been identified as Christopher McKnight, died after he jumped from the ledge along the waterfront in what is believed to have been a case of suicide.

During the tragedy, the breakdown of morals in the society was on full display, as amid the frantic emotions of some onlookers, some persons were more concerned about removing items that the man had left on the ledge at the waterfront.

The development was told secondarily to Loop News by a man who was called to the scene to recover the body from the water.

“Imagine, I hear say the man came down to the waterfront, took off his clothes, took of his chain and shoes, and then took out his wallet,” said the diver.

“These were all items he left on the left edge close to the waterfront, and by the time he jumped off, within minutes of that happening, those items were gone,” added the concerned citizen.

“A mean, people were more concerned with stealing the items the man had left, instead of helping."

According to an alleged eyewitness to the drowning incident, McKnight jumped into the water at about 3pm from the edge of a ledge along the waterfront.

A woman at the scene told Loop News that it was after he started struggling in the water that she realised that he could not swim.

An alarm was raised, but McKnight drowned before help could get to him, the woman related.

The marine police were summoned, and with the help of a civilian volunteer diver, they were able to recover the body.

The City Centre police are investigating the incident, one of a number of recent drownings at the waterfront.

Just moments after the latest incident, a policewoman said less than a month before, a woman jumped into the water in what appeared to be a suicide attempt, and the officer who was nearby, managed to call for help and the woman was saved.

“I was by the waterfront with a family member one night and I heard a big splash. When I looked around, I saw a woman in the water struggling,” said the policewoman.

The cop said she rushed to a nearby stall for a piece of stick, which she extended into the water so the woman could hold on to it until more help came.

The policewoman, who did not wish to be named, said she realised that even though the woman had seemingly attempted to commit suicide, she took the help when it was offered.

The cop said she believed it would have been the same if someone had offered help to the latest victim before he died.