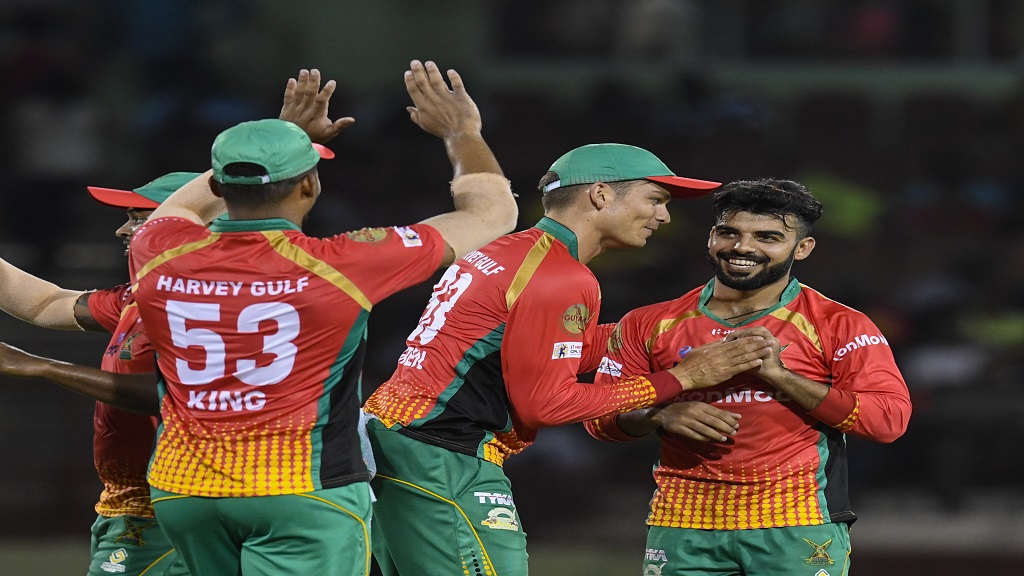 A seventh-wicket partnership of 48 from 21 balls between Keemo Paul and Chris Green proved decisive as 2018 runners-up, Guyana Amazon Warriors, made a winning start to their 2019 Hero Caribbean Premier League (CPL) campaign against St Lucia Zouks on Thursday.

The Warriors had struggled to 98 for six in the 16th over, their momentum seemingly checked by an untimely wicket every time they looked to be getting back on track before the two all-rounders got to work and changed the whole mood of the innings.

Green then added two wickets – including the crucial one of Rahkeem Cornwall – to complete a fine all-round display, while gun leg-spinner Shadab Khan took three for 16 from his four overs and Romario Shepherd two for 18 as the Warriors ran out 13-run winners.

Cornwall, who made his West Indies Test debut last week, had threatened to render all Paul and Green’s good work moot in a brutal assault on the new ball. The all-rounder had plundered 36 from just 13 balls, including a huge six over long-leg sandwiched between a pair of fours to greet Ben Laughlin to the attack, before being pinned by a quicker full delivery from Green that thumped into the batsman’s boot on the full.

Green had by then already accounted for Andre McCarthy (7), Paul taking the catch at mid-off as Guyana’s batting heroes combined in the field, and Shadab had dismissed the dangerous Andre Fletcher (8) in his first over.

Cornwall’s quick-fire start had got the Zouks well ahead of the rate but they just kept losing wickets every time they looked poised to take control of the chase. Najibullah Zadran unfurled some eye-catching boundaries in his 23 before holing out to Sherfane Rutherford at deep square-leg off Shepherd, and Shadab had his second wicket when Christopher Barnwell lunged forward only to be beaten and stumped for seven.

That left vastly experienced all-rounders Thisara Perera and Daren Sammy together for the Zouks knowing they had a lengthy tail to protect and still more than 70 runs needed.

The early signs were promising, with Sammy taking a four and a six from Green’s final over to dent his figures, but the boundaries dried up after that and the run-rate started to climb.

When Sammy (18) and Perera (8) fell in successive overs, both caught in the deep by Shimron Hetmyer off Shadab and Shepherd respectively, the game was up for the Zouks. Krishmar Santokie briefly flickered the chase back into life by taking Laughlin for 10 runs in his first two balls, but the wickets continued to fall regularly as the Zouks came up short.

In a Guyana innings that had bobbed along at around a run a ball for the most part, Paul (38) launched three huge sixes and three fours in his 22-ball stay, with Green sending an Obed McCoy free-hit all the way over midwicket and adding two fours in the final over to lift the Warriors beyond 150 before sacrificing himself to a run out looking for an impossible second run from the final ball of the innings to depart with 28 from 15 to his name.

Until that partnership it had been a frustratingly stop-start innings. Brandon King slapped the first ball of the night from Perera for four but added just three more from another eight balls before edging an attempted legside heave through to Fletcher off Kesrick Williams.

Setting the tone for much of what was to follow, Chandrapaul Hemraj looked to be finding his range when he smashed Santokie magnificently over cover for the first six of the night only to fall later that same over, deceived by a clever slower ball and holing out to Perera at long-off. He made 14.

Hetmyer and captain Shoaib Malik opted for patient rebuilding after the loss of both openers, but neither man was able to kick on.

Hetmyer picked out deep cover off McCoy, and when Nicholas Pooran was bowled off the inside edge next ball McCoy was on a hat-trick and the Warriors right back in trouble.

Sherfane Rutherford survived the hat-trick ball and got a couple of eye-catching boundaries away before he too succumbed, beaten by a big-spinning googly from Fawad Ahmed and overbalancing to give Fletcher the briefest of windows to complete the stumping. The keeper was up to the task with a sharp piece of glovework.

Malik went the same way, albeit with Fletcher having a far easier task this time as the Warriors skipper ran past one and never had any hope of getting back.

Paul and Shadab were dismissed in successive balls in the final over of the innings as McCoy found himself on a hat-trick for the second time in the night, but by then the Warriors had enough.

For images from this match visit https://mm.gettyimages.com/mm/nicePath/gyisports?nav=pr650394159 where they can be downloaded and used for free. Credit: CPL via Getty Images.