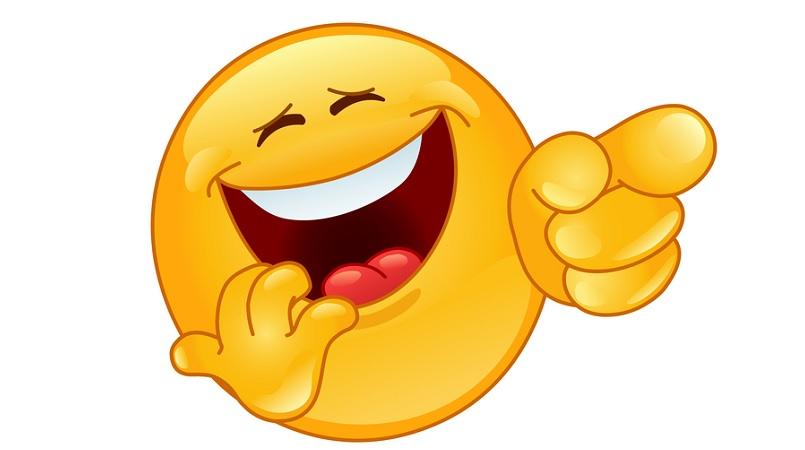 Instead of crying about it; laugh about it.

A news anchor asks when social distancing will end because “my husband keeps trying to get into the house.”

And a sign outside a neighbourhood church reads: “Had not planned on giving up quite this much for Lent.”

Are we allowed to chuckle yet? We’d better, psychologists and humourists say.

Laughter can be the best medicine, they argue, so long as it’s within the bounds of good taste.

And in a crisis, it can be a powerful coping mechanism.

“Even during the Holocaust, people told jokes,” Rhodes said in a telephone interview with The Associated Press.

“Laughter is a symbol of hope, and it becomes one of our greatest needs of life, right up there with toilet paper.

It’s a physical need people have. You can’t underestimate how it heals people and gives them hope.”

For most people, the new coronavirus causes mild or moderate symptoms, such as fever and cough that clear up in two to three weeks.

For some, especially older adults and people with existing health problems, it can cause more severe illness, including pneumonia, and death.

Those are scary words and scary prospects.

But, history has shown that its heaviest moments are often leavened by using humour and laughter as conscious choices — ways to cope when other things aren’t working as expected.

“There’s so much fear and horror out there. All the hand washing in the world isn’t going to clear up your head,” said Loretta LaRoche, a suburban Boston stress management consultant who’s using humour to help people defuse the anxiety the pandemic has wrought.

“We have 60,000 thoughts a day and many of them are very disturbing. Laughter helps the brain relax.”

That explains why social media feeds are peppered with coronavirus-themed memes, cartoons and amusing personal anecdotes.Here’s Diamond posting a video of himself singing “Sweet Caroline” with the lyrics altered to say: “Hands ... washing hands ... don’t touch me ... I won’t touch you.”

There’s Fox News anchor Julie Banderas tweeting: “How long is this social distancing supposed to last? My husband keeps trying to get into the house.”

How long is this social distancing supposed to last? My husband keeps trying to get into the house.

And over here, see novelist Curtis Sittenfeld, sharing a photo of herself eating lunch in her wedding dress after her kids asked her to wear it “and I couldn’t think of a reason not to.”

Social distancing Day 12: Today my kids wanted me to wear my wedding dress at lunch & I couldn’t think of a reason not to pic.twitter.com/2snMmwxuGq

For centuries, laughter in tough times has been cathartic, said Wayne Maxwell, a Canadian psychologist who has done extensive research on “gallows humour.”

The term originated in medieval Britain, where hangings took place in parks near pubs and patrons told jokes at the victims’ expense.

“Even in some of the writings of ancient Egypt, there are descriptions of military personnel returning from the front lines and using humour to cope,” said Maxwell, of Halifax, Nova Scotia.

But, he warns, there exists a kind of comedy continuum: While humour can helpfully lighten things up, too much laughter and flippancy can signal a person is trying to escape from reality.

There are also questions of taste. No one wants to poke fun at medical misery or death.

Quarantining and social distancing, though, are fair game, and self-deprecating humour is almost always safe — though LaRoche cautions that humour, like beauty, is always in the eye of the beholder.

“It all depends on how your brain functions,” she said.

“Give yourself permission to find humour. It’s almost like a spiritual practice, finding ways to laugh at yourself.”

For those millions of parents struggling to work from home and teach their housebound children, she’s preaching to the choir.

Witness this widely shared meme: a photo of an elderly, white-haired woman with the caption: “Here’s Sue. 31 years old, home schooling her kids for the last 5 days. Great job Sue. Keep it up.”

Anyway here's a picture of Sue who has been home schooling her kids this week 😉🤣🤣 pic.twitter.com/76v2ClVKL0

Michael Knight, a 29-year-old musician and a caseworker for people with mental disabilities, has been breaking the tension by posting memes like: “They said a mask and gloves were enough to go to the grocery store. They lied. Everyone else had clothes on.”

“It helps me decompress,” said Knight, of Plymouth, Massachusetts.

“It kind of offsets the paralyzing effects of the boogeyman that is the pandemic.”

Rhodes, who’s out more than $30,000 after three festivals and her first taped special were cancelled, is trying to see the humour in her own predicament.

She recently posted an iPhone video of herself pretending to work a non-existent crowd on an outdoor stage she happened upon during a walk. “How’s everyone not doing?” she cracks.

Comedy in the wild. “You can’t stop me!”
w/ @ajeaton pic.twitter.com/EcG5xv5euU

Her prediction: When life eventually edges back to normal, Saturday Night Live and the latest Netflix stand-up specials will be powered by quarantine humour.

“Just a month ago, who would have appreciated being given a roll of toilet paper?” she said. “I mean, the whole world is upside down.”