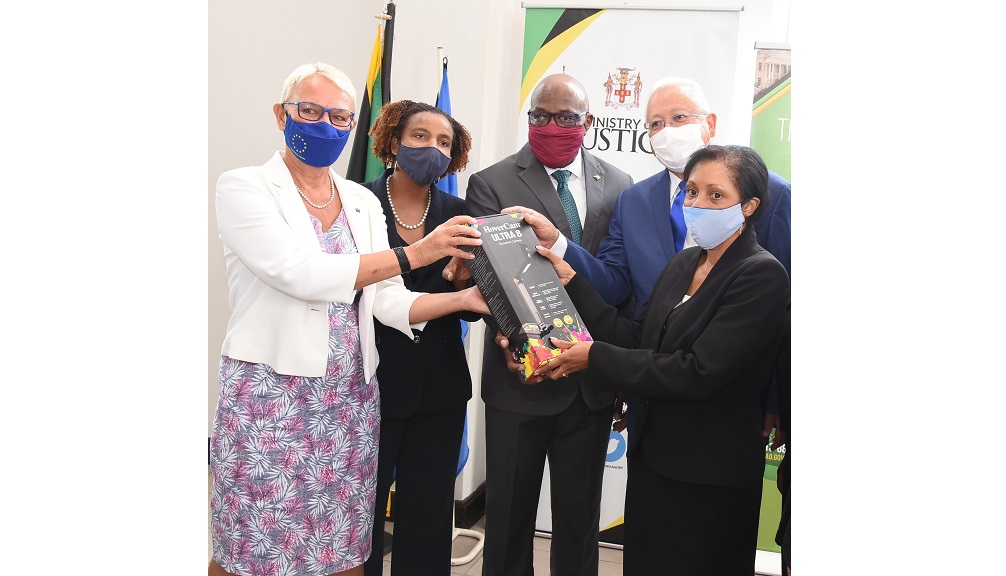 The Ministry of Justice through a partnership with the European Union (EU) officially handed over more than J$85 million worth of audio-visual equipment to the courts of Jamaica during a ceremony held at the St Catherine Parish Court on Friday.

The equipment form part of the greater thrust towards transforming the court system into a modern one, meeting the 21st century needs of Jamaicans, the ministry said in a press release.

According to the ministry, the equipment will facilitate testimonies from remote locations, affording vulnerable witnesses the opportunity to feel safe while they contribute to the process of justice. The equipment also makes it easier to view and play back electronic evidence in court; record court proceedings in real-time and digitize documents among other capabilities, the ministry said.

The donation includes screens, microphones, cameras and supporting software for 78 courtrooms spanning 19 court houses island-wide.  Some of these courtrooms have already been outfitted with the equipment.

Speaking at the handing over ceremony, Minister of Justice, Delroy Chuck expressed gratitude to the EU, noting that the event is a major milestone for the justice sector and shows the commitment of the Jamaican government to the courts.

“This is a clear signal that the Government of Jamaica is intent on providing the necessary resources to assist in achieving fair, timely and efficient resolution of cases, as we journey towards a first class justice system,” the minister stated.

Chief Justice Bryan Sykes said the handover ceremony "represents the ongoing commitment of the European Union to assisting  Jamaica in developing its legal system to become the best in the Caribbean in three years and among the best in six years."

He added that the technology has come at a critical time given the COVID-19 restrictions.

In handing over the AV equipment, EU Ambassador Malgorzata Wasilewska said she is “proud of the steps taken by Jamaica and the EU to modernize the court system and enhance access to justice for the people of Jamaica”, and lauded the Minister and staff at the Justice Ministry for gains made in the continual reform of the justice sector.

“Jamaica’s ongoing reform activities reflect commitment and consensus on the part of the Ministry and the Judiciary. This is an essential ingredient for success, so too is this partnership. The EU is delighted to accompany Jamaica on this journey to modernizing and transforming Jamaica’s justice system,” she said.

The equipment was given through the Justice, Security, Accountability and Transparency (JSAT) programme, which seeks to improve processes and capacities within the justice and security sectors, thereby facilitating the reduction of case backlog and corruption as well as improving prosecutorial capacity.