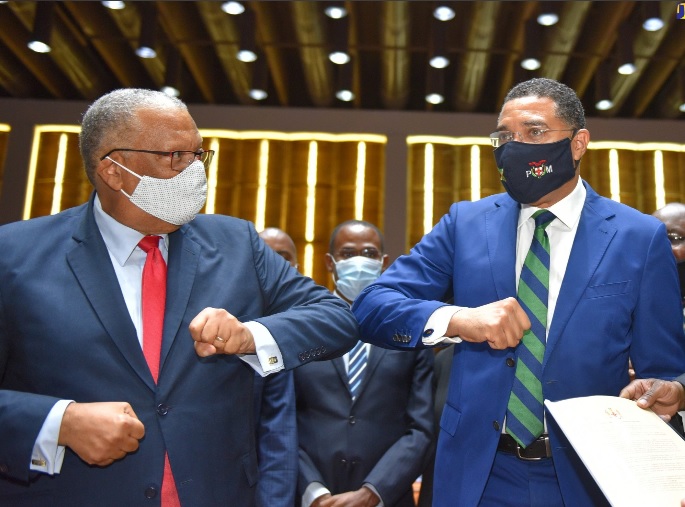 Prime Minister, Andrew Holness; Leader of the Opposition, Dr Peter Phillips; and other key leaders across a wide cross section of Jamaica’s society on Monday signed the National Consensus on Crime Memorandum of Understanding (MOU).

The MOU outlines the steps that must be taken for a sustainable reduction in crime, inclusive of milestones and agreements on a monitoring and reporting mechanism.

The signing took place during the Crime Consensus Summit at the Jamaica Conference Centre, downtown Kingston.

Prime Minister Holness said the signing signals a united approach to fighting crime and creating a robust mechanism to monitor and provide oversight.

He said that public disorder, crime and violence and limited consequences for breaches of the law have for too long characterised Jamaica’s security landscape.

Crime, he noted, is a significant threat to the country’s human and economic development, with high levels of criminality expressed most visibly in homicides. Emphasising the importance of consensus in addressing the issue, he said it is criminals who benefit directly from the “political, economic, social, cultural and infrastructural divides that continue to plague our society”.

“Criminals profit when there is a divide in strategy and policy in the Government,” Mr Holness said, adding, “I take hope in this public commitment towards consensus.”

He pointed out that the MOU brings the people who can make a difference to the table, to publicly commit to a set of priorities.

“The document also has a framework to oversee the critical implementing players to ensure that what we commit to is what we actually do, but more than that, to build public support for the consensus and report to the public on a regular basis that the consensus is being maintained and truthfully followed,” Mr. Holness said.

For his part, Dr. Phillips noted that crime represents a fundamental threat to the survival of the country.

“All of us need to give… courageous, disciplined and sincere support to this effort that we are now embarking upon. One of the things we should do as we move forward is take account of the lessons that can be learnt from our experience over many decades in trying to tackle this issue of violent crime,” Dr. Phillips said.

Priority areas of focus under the MOU include dismantling and eliminating criminal gangs; normalising and reintegrating troubled communities; preventing corruption, collusion and money laundering; and reforming and modernising the police and justice system.

Other signatories to the MOU include the Jamaica Chamber of Commerce; Jamaica Council of Churches; Private Sector Organisation of Jamaica (PSOJ); Jamaica Confederation of Trade Unions (JCTU); Jamaica Umbrella Group of Churches, among others.

In 2018, the private-sector industry associations commenced a process to forge a national consensus with the Government, Opposition, civil society and security experts to develop a National Strategic Programme on initiatives and actions to transform Jamaica to become a safe, secure, and investment-friendly society.

This was presented to the National Partnership Council and received overwhelming support. In October of last year, a summit was held that included members of civil society as well as the leaders and representatives of the Government and Opposition.

The summit concluded with an understanding that successful transformation would require agreement on specific priorities and actions, widespread buy-in as to the way forward, and a bipartisan commitment to implementation.

Since that meeting, a road map was developed with a strategic programme of initiatives and actions that will transform Jamaica into a safe and secure society.