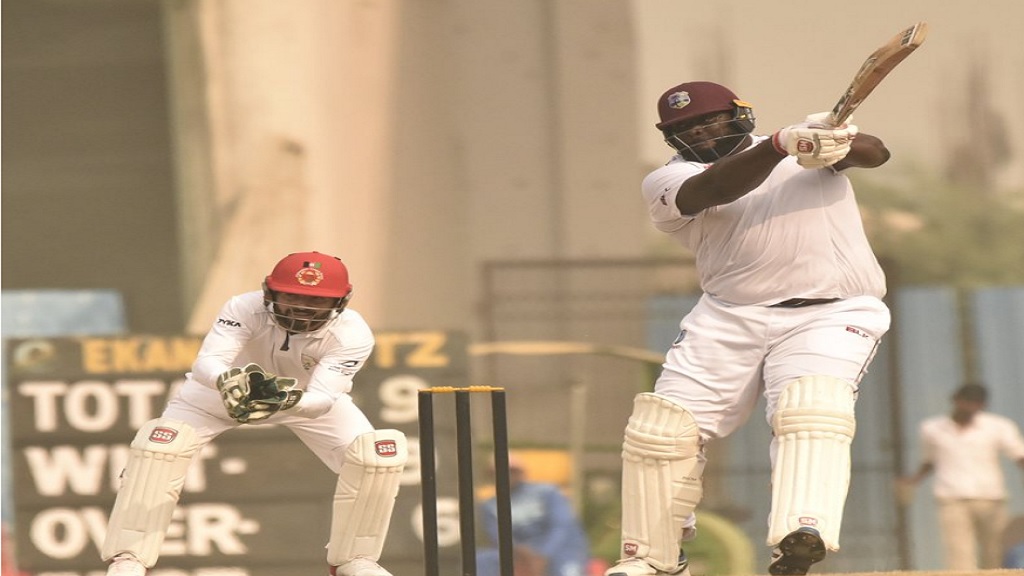 West Indies all-rounder Rahkeem Cornwall in action against the Afghanistan Cricket Board XI.

All-rounder Rahkeem Cornwall displayed his immense value with the bat while fast bowler Alzarri Joseph bowled with pace and touched 90 miles per hour, as West Indies got much-needed acclimatization ahead of the one-off Test match against Afghanistan.

Resuming on Friday at 217 for seven, West Indies were energised by a well-compiled 44 not out from Cornwall before they were bowled out at lunch for 297 in their second innings as the three-day tour match against the Afghanistan Cricket Board XI finished in a draw at the Ekana Cricket Stadium in India.

Cornwall, who made his Test debut against India last August at Sabina Park in Jamaica, struck six fours and two powering straight sixes off just 55 balls. A day earlier the 26-year-old took four crucial wickets to earn West Indies a narrow first-innings lead. Importantly, he engineered a 59-run last-wicket stand with Jomel Warrican (18) after West Indies lost two quick wickets early in the morning session to stumble to 238 for nine.

For Cornwall, the all-round performance meant a lot as he prepares for his first international assignment outside the Caribbean. The Test match will be the first between West Indies and Afghanistan and also the first at the neutral venue in the city of Lucknow.

“I felt good because I gave myself a chance to do well. When we bowled, I was comfortable and I got the ball to turn a lot. The pitches here are a lot drier than what we get back home so that offers something for my style of bowling,” Cornwall told CWI Media.

“Also, I just wanted to bat long and get a feel of how the pitch was playing. That was also very important, and I take my batting quite seriously. I came here in good form as I had some good knocks for Leewards in the (Colonial Medical) Super50 tournament so I wanted to transfers that form.”

Set 308 for victory, the Board XI got half-centuries from Ihsanullah Janat (84 not out) and Ibrahim Zadran (76) in a partnership of 150 as they finished on 183 for three. After tea, Joseph upped his pace in a burst from the southern end and claimed Zadran to a catch at the wicket, and then removed Rahmat Shah for 11.