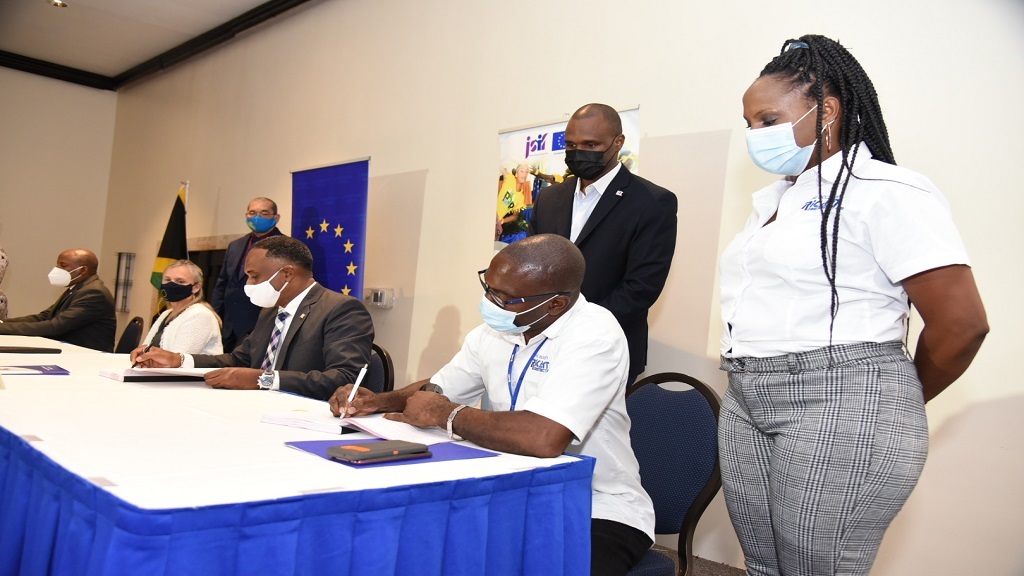 Speaking at the contract-signing ceremony at the Jamaica Pegasus Hotel in New Kingston, Chairman of JSIF, Dr Wayne Henry, said the works are to include the upgrading of five police stations across select parishes – two in Clarendon (Four Paths and Lionel Town); two in Kingston (Denham Town and Franklyn Town);  and one in St James (Adelphi).

“We are also pleased to announce that we will be demolishing the old police station in the Mount Salem community (in Montego Bay, St James) and will be building a new police station for the community,” said Henry.

He noted that JSIF strives to place high emphasis on investing in community development through the implementation of impactful projects to enable citizens to have a better quality of life.

“We are (also) pleased to announce that under the JSIF-PRP phase four project, the Ministry of Health and Wellness, Western Regional Health Authority will benefit from three upgraded health centres in St James (Barrett Town, Flanker and Granville) and a newly-constructed health centre in the Adelphi community,” Henry added.

He said the facilities are to boast modern amenities, including consultation rooms, dental offices, pharmacies and sterilisation and treatment rooms.

Henry stressed that the roles of the contractors are critical to the delivery of a high-quality finished product.

“In this regard, I am urging the contractors who have been successful in their bids, to ensure that project completion is timely, while reflecting adherence to standards and the highest quality, as it is very important for us to build sustainable infrastructure,” he said.

In her remarks, Head of the European Union Delegation to Jamaica,   Ambassador Marianne Van Steen, said the upgrading work on the health centres will expand the capacity of the health sector to deal with the regular health concerns and to allow a better response to increased traffic flow within the health sector, resulting from the COVID-19 pandemic.

“We are particularly pleased that improvements in services will include the construction of a mental health office at the Flanker Health Centre; pharmacy services at the Adelphi and Granville health centres; dental offices at Flanker and Granville health centres, and retrofitting of the entire Barrett Town Health Centre, to facilitate disability access,” Van Steen said.

She noted that the renovation of the police stations will also provide much-needed improvements to the security experiences of both the police and residents, particularly for the police, whose role has been expanded as part of the national response to COVID-19.

“Planned improvements include cell block and barracks room upgrades for all (the) police stations (to be targeted), and resource/training rooms for the Four Paths, Franklyn Town and Adelphi police stations,” Van Steen added.

She further indicated that the collective improvements are to benefit over 50,000 residents and workers of the seven communities in which the facilities are located.

The Planning Institute of Jamaica (PIOJ) has oversight to provide technical support for the successful implementation of the European Union’s Poverty Reduction Programme, which has been executed by the Jamaica Social Investment Fund over the past 19 years.