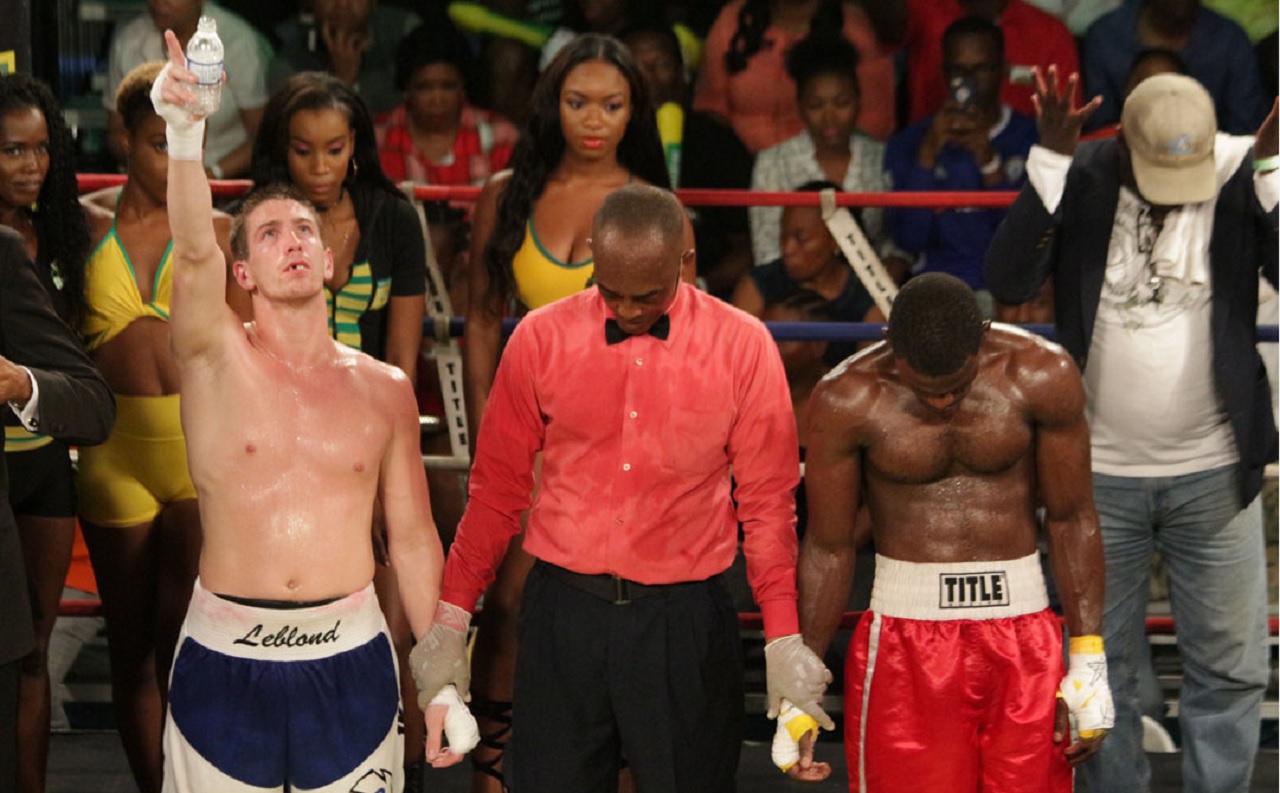 Canadian Dave Leblond raises his right hand after the announcement of his majority decision victory against Jamaican Nico Yeyo (right) in the sixth bout of the 2017 Contender Boxing Series on Wednesday at the Chinese Benevolent Association.

Canadian Dave Leblond made use of his second chance in this year's Wray and Nephew Contender Boxing Series as he earned a majority decision victory over Jamaica's Nico Yeyo on Wednesday night at the Chinese Benevolent Association.

It was the sixth bout of the preliminary round.

In another close junior middleweight contest, Leblond got two of the three judges to score the bout in his favour, with the other having the fight a tie.

Leblond had lost a split-decision verdict against Jamaican Tsetsi Davis earlier in the series, which the crowd at the venue thought he had won, and booed the decision. He appealed but it was upheld.

He, however, returned on Wednesday night, after his countryman, Ryan Wagner pulled out, after failing a medical and the promoters, acting on the controversy from the fight against Davis, gave him another opportunity.

The five-round fight itself was not of a good quality, as both boxers, especially Yeyo did very little boxing throughout, but instead, wrestled and muscled their opponent around, which makes the bout possibly the worst fight this season.

Both fighters got in a few solid punches and jabs however, with Yeyo showing that he packs some power. He jabbed Leblond a number of times that pushed back the Canadian.

Those jabs however, were very few, as immediately after throwing a punch, whether it meets its intended target or not, Yeyo would immediately grab onto Leblond and they would stay clenched until referee  Owen Nelson intervenes.

This resulted in Yeyo losing two points and Leblond one, in the final round, which was a significant factor in the result, as the Canadian moves his record to two wins and a loss.

It was the first professional fight for  Yeyo.

Speaking through his trainer, Patrice Trudeau, who interpreted for him, Leblond said that he was really disappointed because he wanted to give a good show.

Leblond said he was prevented from giving a good show because of the constant holding by Yeyo.

Leblond further said that the fight against Yeyo was much harder than his bout with Davis.

He explained that Davis knows how to box and even though he won on Wednesday night, it was difficult because of the unorthodox nature of Yeyo.

Yeyo said, "it was a good fight. We were both hugging. The result could have gone both ways."

The preliminary round comprises eight fights over five rounds each and four more over the same distance in the quarter finals to be followed by two semi-finals over seven rounds, and then the grand final, which will be over 10 rounds.