Completion of arrangements with IMF a major milestone for Jamaica – PM 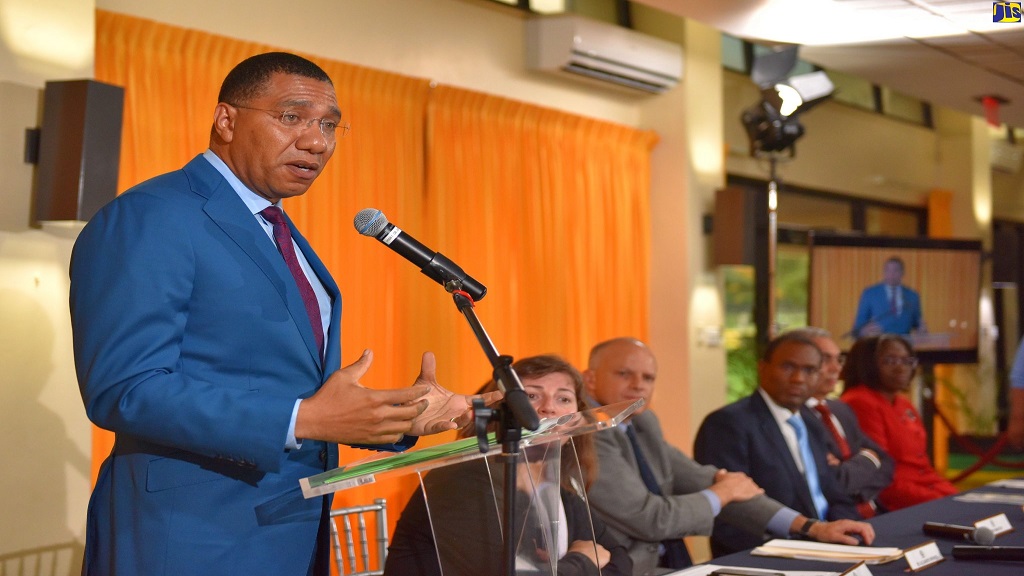 Prime Minister Andrew Holness (at podium) highlights a point while addressing a press conference at the Office of the Prime Minister on Wednesday. (Photo JIS)

Prime Minister Andrew Holness says Jamaica’s successful completion of financial arrangements with the International Monetary Fund (IMF) is a major milestone in the country’s economic history, for which all Jamaicans can be proud.

“We have worked consciously, deliberately…we have worked with transparency. We have worked diligently to ensure that we meet all the targets that we have set for ourselves and this is a major achievement in our economy and our development generally,” he said.

The prime minister was speaking at a press conference held at the Office of the Prime Minister on Wednesday, as the IMF completes its sixth and final review mission under the Precautionary Stand-by Arrangement (SBA).

Holness said Jamaica is now being viewed as an example of a country “that has successfully executed difficult economic policies.”

Holness noted that the accomplishment was also due, in part, to the fact that the country had ownership of the programme.

“We have passed our tests because this was Jamaica’s programme. This was put together by the Jamaican authorities and we agreed with our partners, the IMF, for their assistance, technical or otherwise and for them to speak truth to us when we deviated,” he pointed out.

The prime minister expressed confidence that “with the IMF now out of the room” the government can maintain the fiscal discipline that the country has committed to over the last 10 years.

“I believe that the culture of fiscal responsibility has now become institutionalised, particularly in the Ministry of Finance (and the Public Service) and generally throughout the government. Yes, we are happy we have achieved a major milestone, but it is not the end of our fiscal responsibility,” he said, noting that the country must now “transition into another level of higher responsibility.”

Jamaica’s current programme with the IMF is scheduled to officially end in November. The country will, however, continue to benefit from technical assistance, and the Jamaica office will be maintained for an additional two years.

Jamaica’s latest relationship with the IMF started in 2013 when the country entered into a four-year US$932-million Extended Fund Facility (EFF).

This arrangement ended in 2016 when it was replaced by a US$1.6-billion Precautionary Stand-By Arrangement.

Gains made under IMF programme will continue – Clarke