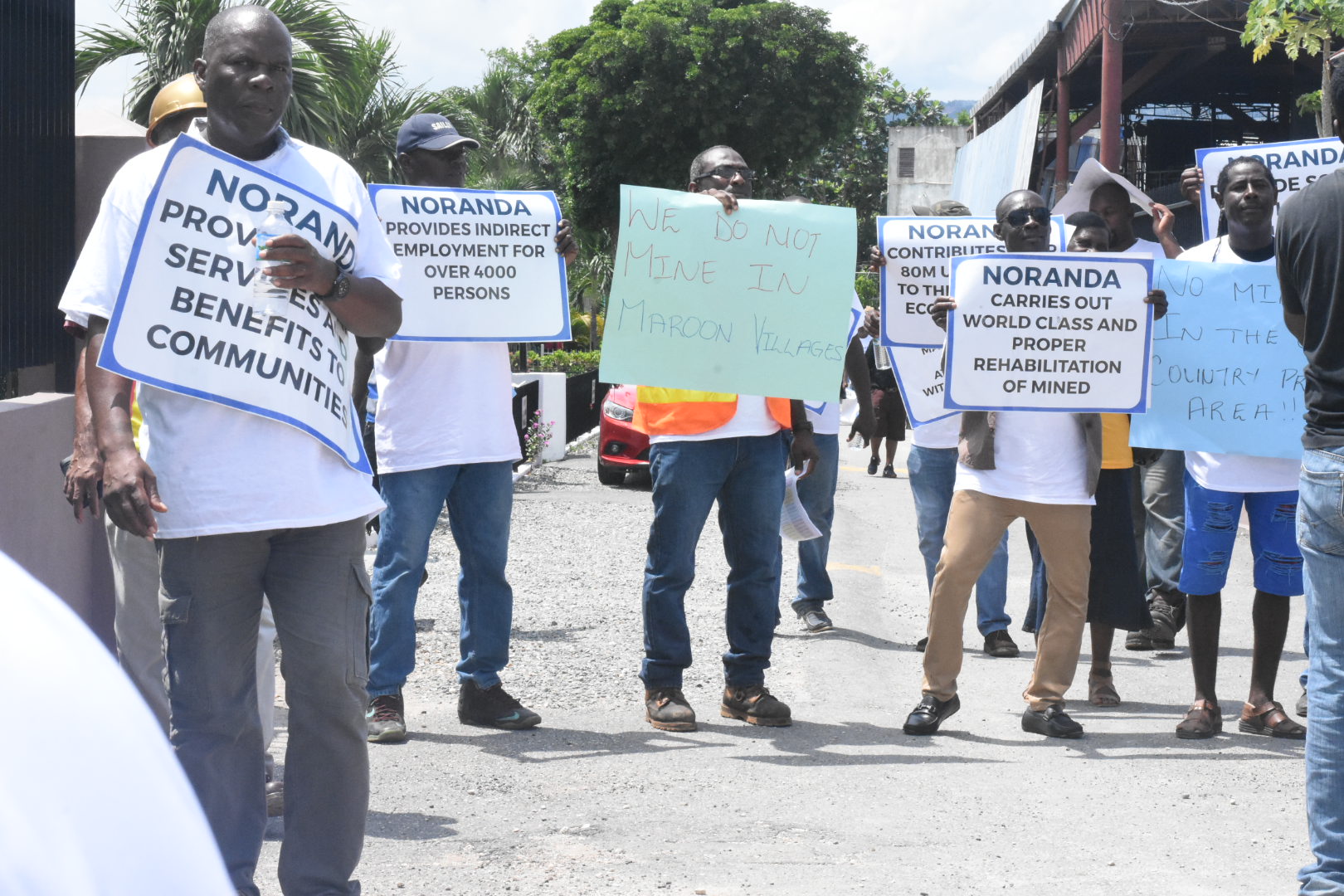 Workers of Noranda Bauxite Company were joined by some community members of the Cockpit Country to stage a protest outside the Jamaica Environmental Trust (JET) office on Constant Spring Road in St Andrew on Monday.

According to representatives of the group, which numbered about 200, the protest was to change the narrative about Noranda's licence to mine in the Cockpit Country region, by highlighting the positives about the company, and debunking ‘misinformation’ about the entity.

Gawain Turner, a land surveyor at Noranda, said the protest was also about protecting the many jobs that are at stake should Noranda not be able to go ahead with plans to mine where it has been authorised to do so.

He said, "Noranda is a responsible mining company and adheres to all Government regulations. We have no intentions of mining in the Cockpit Country." 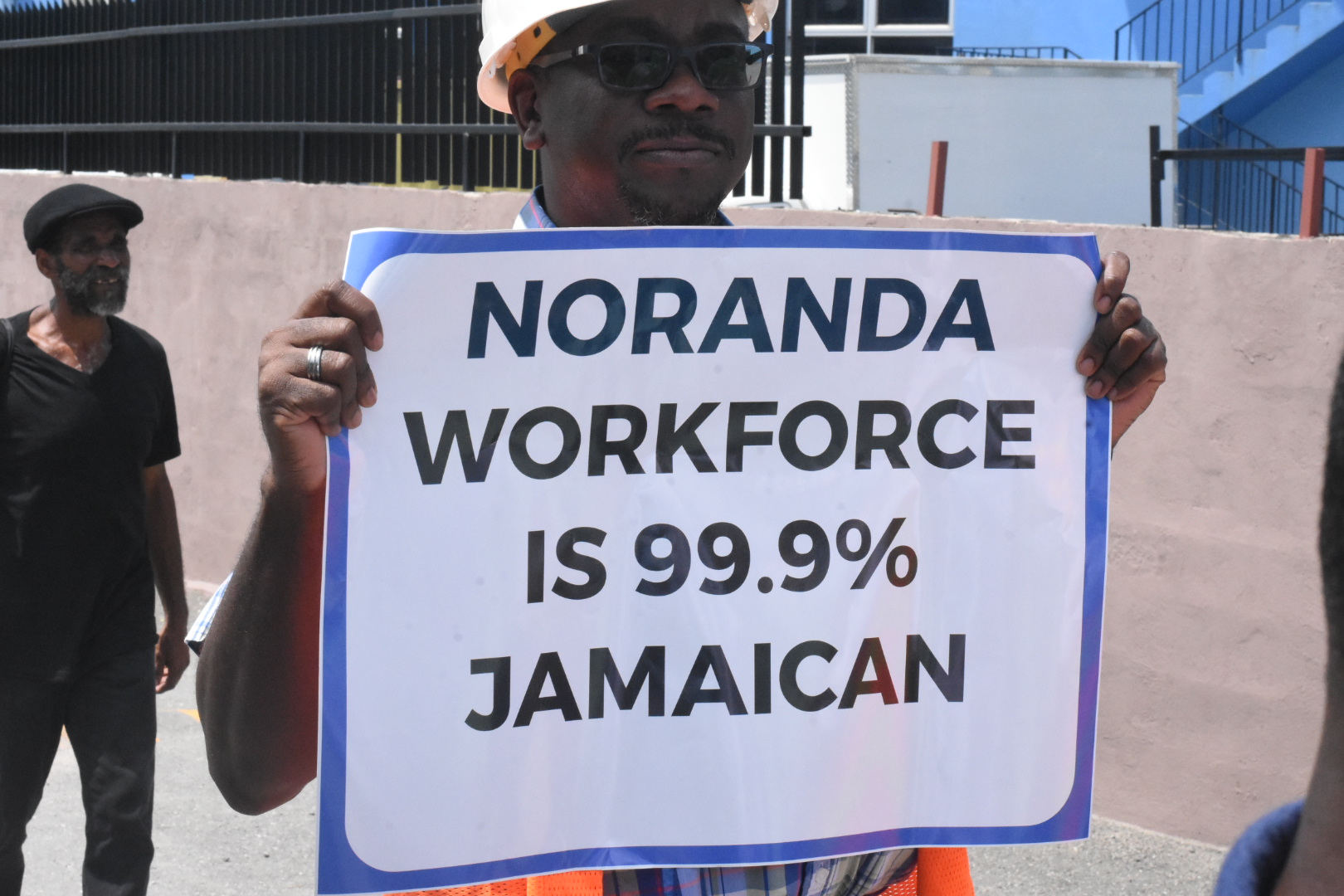 According to Turner, the concerns of environmentalists and other groups that mining in the Cockpit Country region could disturb the ecology of the area, are not real.

He also said that concerns about disturbance to the water table in the area are unfounded. Turner said the water table is about 400 feet down into the ground, and bauxite mining will not go that deep.

As a matter of fact, Turner said, "in all the area that the Government gives us (to mine), we will only be mining about 15 per cent of that area."

Alfred Henry, a mining superintendent at Noranda, said the entity employs over 100 small contractors who have invested over $4 billion over the past two years, with the investment by Noranda being critical to the survival of many individuals around the Cockpit Country region.

He said that apart from the direct jobs that Noranda provides, the entity also uses the services of another 4,500 persons indirectly.

Henry said, "We want to make it very clear that this industry is very critical and we cannot use politics and downplay the situation and let the investors move out."

According to him, the quality of bauxite in the area that is protected is not viable, and the company has no plans to venture into that section of the Cockpit Country.

A protestor, who identified herself as a teacher from the community, said her family depends on Noranda. She said she is disappointed in environmentalists, politicians and entertainment groups whom she claimed were telling lies about mining in the Cockpit Country region.

"When I look at Noranda, in my community of Happy News, we have several greenhouses provided by them. They help schoolchildren; parents who cannot afford to send their children to school can go to Noranda and will get help," she said.

In response, Susan Stanley, the Chief Executive Officer (CEO) of JET, said the entity has maintained discussions with Noranda over many years, so it was confusing to her, the purpose of the protest. She said JET's position will not be impacted by the protest.

Stanley said JET's position is that the boundaries that are being bandied about have left out areas that should be included in the Cockpit Country.

But the placard-bearing demonstrators insisted that no mining is taking place in the protected area of the Cockpit Country.

"The narrative needs to change. We are not mining in the Cockpit Country protected area one of the protesters declared.

"And we are not mining in or near the Maroon towns in Accompong or anywhere there," he added.

Last Friday, Noranda workers pressed Opposition Leader, Dr Peter Phillips, to clarify the People's National Party (PNP) position on the ongoing Cockpit Country anti-bauxite mining campaign which the workers claim is misrepresenting the facts and could have negative effects on their jobs and the bauxite industry.

The employees, in a spontaneous outturn, met Phillips while he was on a tour of Noranda’s bauxite mining area in St Ann on his way to a ‘Cockpit Country Warriors’ public vigil that was scheduled for Stewart Town in Trelawny on Friday night.

The Opposition leader’s tour was interrupted by scores of employees who posed questions on the party’s position re-mining in the Special Mining Lease 173.

The employees said the lease has been officially confirmed by Government mining regulatory agencies as being outside of the Cockpit Country Protected Area.

They also expressed concerns about the political support being given to the claim that Noranda’s mining activities will be disruptive to the Cockpit Country and the environment.

The workers insisted that Noranda is not, and has no plans to, mine in the protected areas, and stated that Noranda shares the national respect and concern for the heritage of that area.