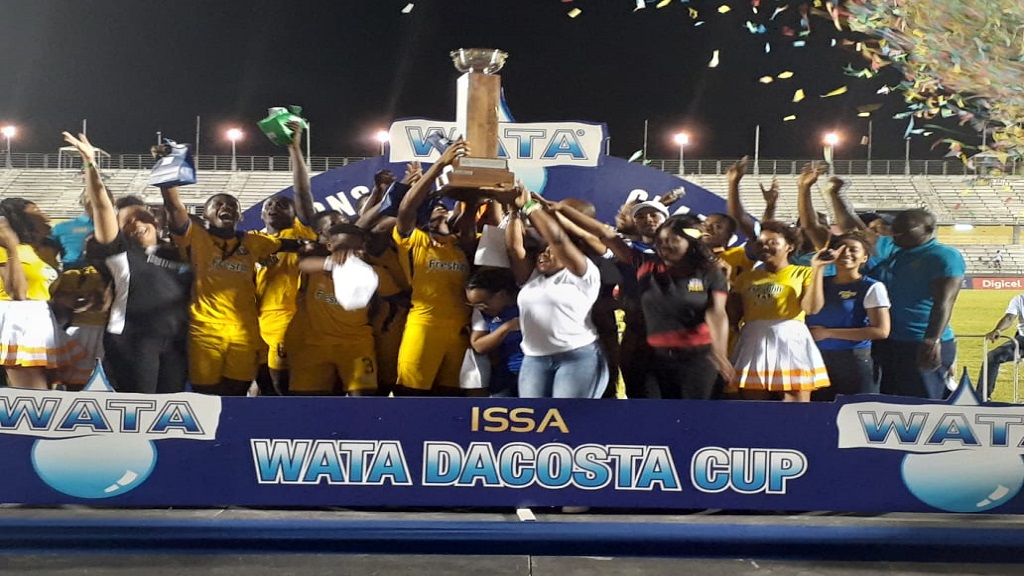 Clarendon College's players and supporters celebrate with the daCosta Cup after beating Dinthill Technical 3-0 in the final at the Montego Bay Sports Complex on Saturday, November 30, 2019. (PHOTOS: Marlon Reid).

Clarendon College erased the disappointment of last Saturday's all-island Champions Cup final loss by claiming the ISSA/Wata daCosta Cup for the ninth time with a 3-0 victory over Dinthill Technical in Montego Bay on Saturday night.

Following a goalless first half that they dominated by moving the ball beautifully around, the Lenworth Hyde-coached team took the lead through through captain Earl Simpson, who headed home a Rodrick Granville's cross from the top of the six-yard box.

The go ahead goal changed the mood inside the Montego Bay Sports Complex as the Clarendon College's supporters went into wild celebration.

Clarendon College then took control and got the other two goals from substitute Andre Nicholson (56th minute) and Tajhay Williams (90+2 minute).

The victory makes Clarendon College the first time since 2011 to defend the daCosta Cup. Rusea’s High won the title in 2010 and successfully defended it the following season.

Clarendon College finished the daCosta Cup season unbeaten for the second straight year. They ended the 2018 season with a perfect record from 15 matches.

On Saturday, Clarendon College finished with a record of 12 victories from 13 games, their only blemish a 1-1 draw against Lennon High on September 7, the opening day of the season.

Dinthill Technical High School out of Linstead, St Catherine were searching for their first daCosta Cup title in 38 years after winning the last of their two titles in 1981.