CIBC strengthens Food for the Poor sponsorship with $1.8-m donation 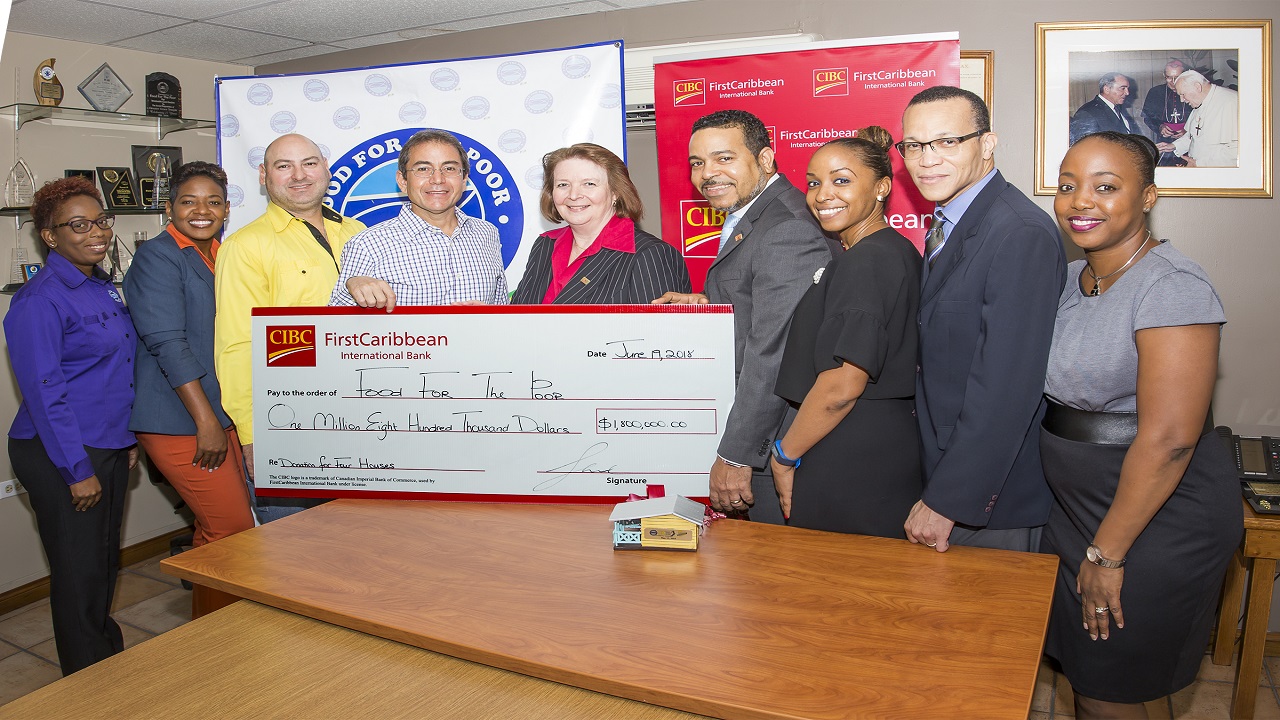 Food for the Poor and CIBC executives at the handing over of the bank’s donation.

The partnership between CIBC FirstCaribbean International Bank and Food For The Poor (FFP) has been further strengthened with the bank’s donation this week of $1.8 million for the construction of four houses for needy Jamaicans.

The bank previously funded the construction of 11 homes on the island.

Food For The Poor, the largest charity organization in Jamaica, is the local arm of the Florida-based FFP – the largest international relief and development organisation in the United States of America.  The interdenominational Christian organization assists the poor in 17 countries in the Caribbean and Latin America, providing emergency relief and aid programmes in the areas of housing, food, medical, water sanitization, education, agriculture outreach and microenterprises.

CIBC FirstCaribbean has been supporting FFP since 2010, when the bank contributed to relief efforts in Haiti following a devastating earthquake and again in 2016 following Hurricane Matthew.  The funds donated by the bank helped in the dissemination of food, water and other critical supplies.

Last year when FFP launched their “Make a Difference 5K Initiative” with the aim of building 100 homes for needy Jamaicans by year end, CIBC FirstCaribbean International Bank funded the construction of 11 of the houses.

Andrew Mahfood, Chairman of FFP Jamaica told a delegation from the bank on June 19, 2018, “there is no greater satisfaction than giving a person or a family a house.”

“The Make a Difference 2018” goal of 100 homes has reached the 50 mark and he thanked CIBC FirstCaribbean International Bank for their continued support and partnership.

Collette Delaney, Chief Operating Officer of CIBC FirstCaribbean International Bank said that “while the bank’s business is finance, partnering with FFP and similar causes is a most fulfilling part of our job.”

“We are committed to giving no less than US$1 million annually to community efforts and a large sum is spent in development efforts and disaster relief and in-community projects.  We believe that education is a way out of poverty and so we fund several education initiatives with national schools and regional institutions like The University of the West Indies.”

Nigel Holness, Managing Director, CIBC FirstCaribbean Jamaica congratulated FFP on their achievements to date.  “We believe in what you do and we feel privileged to partner with you to help communities grow, develop and enjoy improved living standards.”

40 homes to be built by Food for the Poor