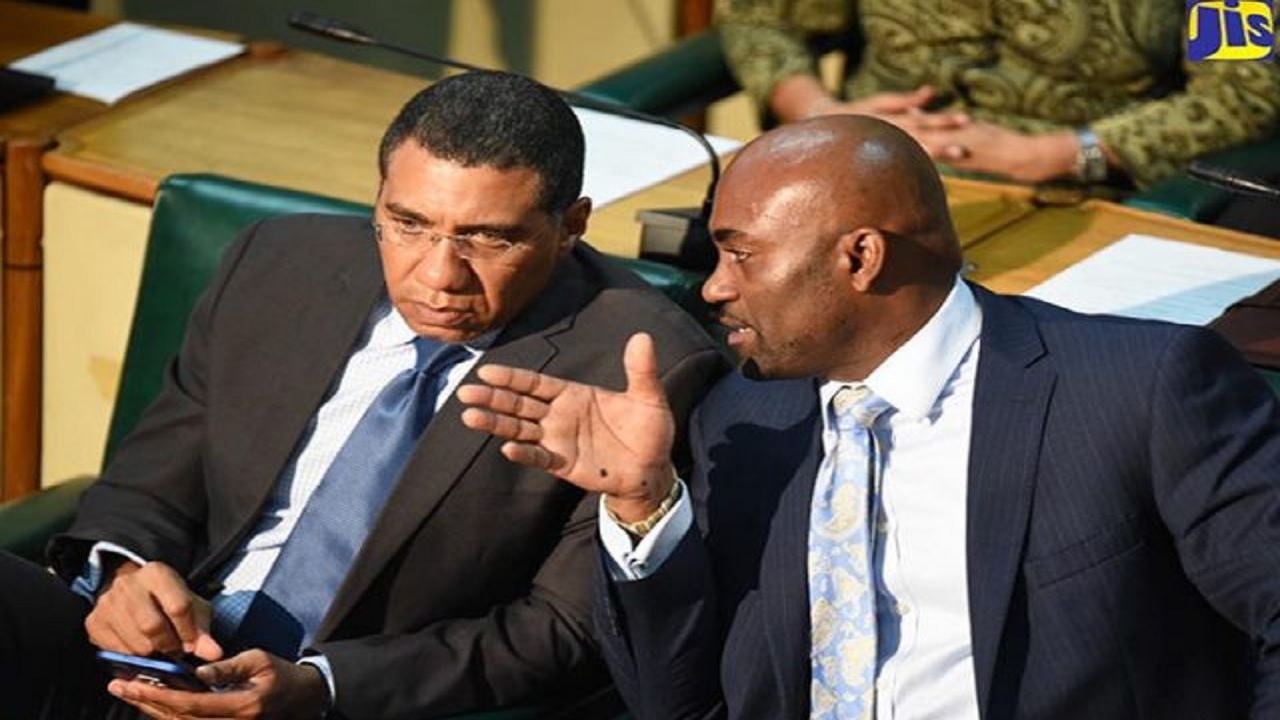 It is being recommended to Holness (left) that former Energy Minister Dr Andrew Wheatley (right) be excluded from any Cabinet meeting that deals with matters related to Petrojam over which he previously had portfolio responsibility.

The church, a corruption watchdog and the country’s three most powerful private sector groups have signalled to Prime Minister Andrew Holness that they have no intention of letting the unfolding Petrojam scandal die a natural death.

To this end, the Jamaica Umbrella Group of Churches (JUGC), National Integrity Action (NIA), the Private Sector Organisation of Jamaica (PSOJ), the Jamaica Manufacturers and Exporters Association (JMEA) and the Jamaica Chamber of Commerce (JCC) have written a joint letter to Holness. They are imploring him to confront and deal with what they describe as the “longstanding erosion of public trust in institutions of governance, accentuated by allegations relating to Petrojam.”

In the joint statement issued on Wednesday, the civil society and private sector groups said they had agreed on the fundamental importance of urgent measures to strengthen integrity as well as good governance.

They also recommended that former Energy Minister Dr Andrew Wheatley be excluded from, or otherwise recuse himself from, any Cabinet meeting that deals with matters related to Petrojam over which he previously had portfolio responsibility.

Wheatley was earlier this month stripped of the Energy portfolio over which the Prime Minister has assumed responsibility. This followed allegations of inappropriate spending, nepotism and cronyism as well as breaches of Government’s procurement guidelines and cost overruns at Petrojam.

In the wake of the scandal, the three members of the Jamaican board resigned in June and have since been replaced while the under fire General Manager Floyd Grindley who was personally accused of numerous breaches of government’s procurement guidelines, left the company last week.

But, while Wheatley was stripped of the Energy portfolio, he retains a place in the Holness Cabinet as the Science and Technology Minister and the private sector groups have taken note.

Below is the letter in full:

We write this open letter following an urgent consultation among ourselves, namely the Jamaica Umbrella Group of Churches (JUGC), National Integrity Action (NIA), the Private Sector Organisation of Jamaica (PSOJ), the Jamaica Manufacturers and Exporters Association (JMEA) and the Jamaica Chamber of Commerce (JCC) convened at the request of the JUGC and NIA on July 16, 2018.

The meeting examined in depth the longstanding erosion of public trust in institutions of governance, accentuated by allegations relating to Petrojam and agreed on the fundamental importance of urgent measures to strengthen integrity as well as good governance. In our considered opinion Prime Minister, declining public confidence in Jamaican authorities is now approaching crisis proportions reflected in many aspects of our society: in unprecedentedly low voter turnout; growing disregard for law and order; declining involvement in community organisations and increasing support for undemocratic solutions to deal with high levels of crime and corruption.

Our respective organisations are of one mind that urgent action is demanded to deal with the situation at Petrojam, and more generally, to curb practices of nepotism, cronyism, favouritism and other evils that have long scarred governance of public bodies and contributed to waste of taxpayers’ money.

Amongst the actions, Prime Minister, we urge that:

1. So long as the former Minister of Energy remains a Member of the Cabinet, he be immediately excluded or recuse himself from all deliberations of that body (or Cabinet sub-committees) relating to Petrojam, including discussions of reports, investigations, reforms and system reviews, etc.

2. The Integrity Commission, the Major Organised Crime and Anti-Corruption Agency and the Auditor General’s Office should be provided with the necessary resources to ensure the completion of their investigations and report into Petrojam within three months. These reports should be laid in Parliament immediately thereafter.

3. The terms of reference, composition and deliverables of the Strategic Committee to review Petrojam’s operations, which is to be chaired by Christopher Zacca, be disclosed publicly; further, that the committee submit its report and recommendations within three months, that these be made public and that the Board of Petrojam be required to report quarterly on the implementation of agreed recommendations.

4. The Codes (in particular the Code of Conduct for Ministers), guidelines (in particular the Corporate Governance Framework for Public Bodies and the Competency Framework) and laws (in particular Public Bodies Management and Accountability Act) relating to corporate governance for all public bodies be implemented, monitored and enforced with attendant sanctions when violated or not implemented. This process should be oversighted by a public-private-civil society partnership body, which would report to Parliament annually as well as provide quarterly reports to the public.

5. We are aware that the administrative responsibility for the development and monitoring of the adherence to policy guidelines is reposed within the Public Enterprise Division of the Ministry of Finance, but respectfully suggest that this Unit be strengthened, repurposed and positioned within the Cabinet Office with the authority to impose sanctions on delinquent Boards and to report Ministerial breaches to the Prime Minister. We further offer the services of the Governance Committee of the Private Sector Organization of Jamaica to assist the Unit in the process of strengthening the Governance protocols and designing sanctions for their breaches”.

6. The main laws, codes, guidelines and regulations relating to good governance should be consolidated into one compendium within three months, and form an essential component of governance training for all Cabinet Ministers within six months thereafter. In the interim, we would ask that you disclose what action you are taking in relation to the recommendation in the Contractor General’s Report (July 2017) on de-bushing, and in relation to the failure of the Government to receive the 200 used cars that we purchased for the Jamaica Constabulary Force – two of the issues that have recently sparked considerable public concern.

For our part, we propose to contribute to the enhancement of public morality, ethics and accountability in governance, as well as more broadly, through engagements involving civic dialogues in town hall type settings, for the purpose of sensitising citizens on how erosion of public trust impacts the nation, as well as calling them to their responsibilities.

During the course of our consultation Prime Minister, we together examined reports and recommendations in the past from oversight bodies, particularly, in relation to Petrojam on which no corrective measures were taken. We therefore wish to emphasise that now is the time for action. We are together requesting an urgent meeting with you to discuss and seek agreement on the above recommendations, which we are making.