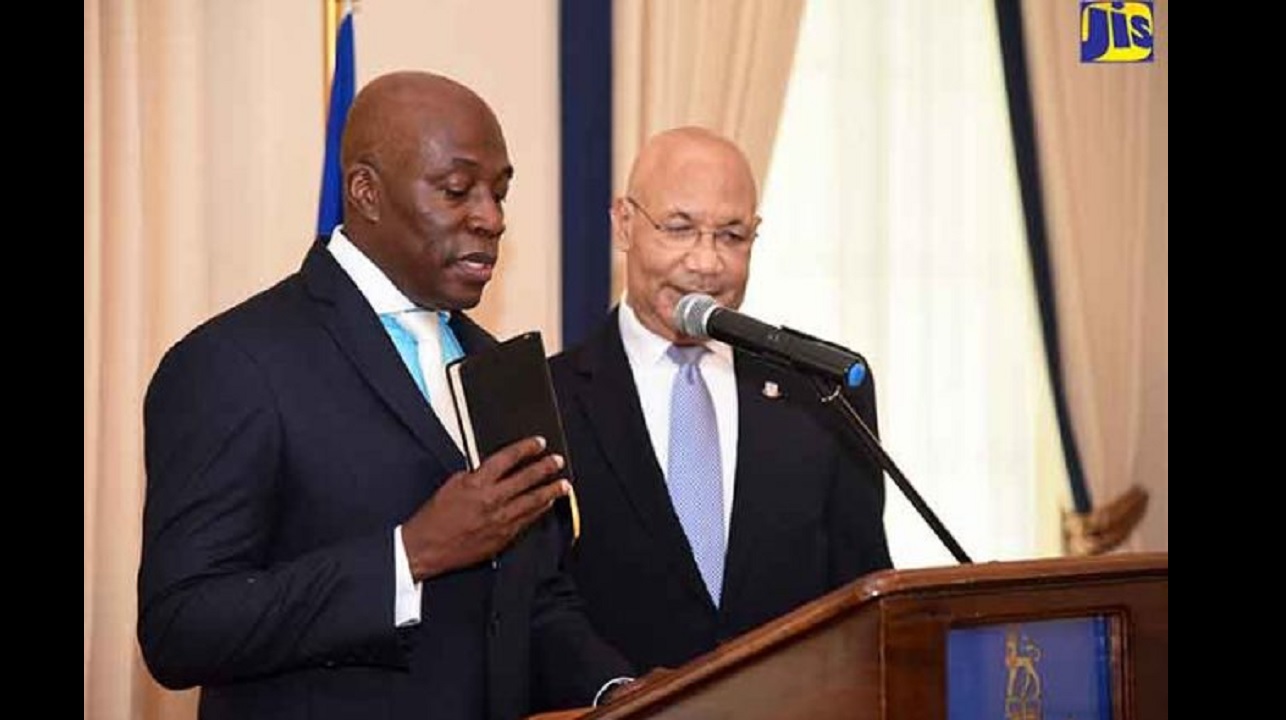 Justice Bryan Sykes takes the Oath of Office during a ceremony at King’s House on February 1, after being appointed to act as Chief Justice. Governor General Sir Patrick Allen looks on. (PHOTO: JIS)

The Jamaica Council of Churches (JCC) has weighed in on the controversial decision by Prime Minister Andrew Holness to appoint Bryan Sykes to act as Chief Justice, a move that is unprecedented in the country’s history.

The JCC said it was concerned about the process being employed to appoint the new Chief Justice.

“We are seized of the importance of this critical office, enshrined in the constitution of Jamaica as one of the safeguards to protect the separation of powers and the independence of the judiciary,” said the JCC in a statement.

The umbrella organisation representing various denominations said its concerns were predicated on a number of factors including that:

The JCC acknowledged that “for these questions there would really be no easy answers given the independence of the Office.”

It said the Prime Minister’s statement that “actions that bring results will determine the assumption of the role of chief justice” raises questions about his perspectives regarding the time-honoured tradition of the separation of powers. It is the Council’s view that the appointment of our country’s Chief Justice should never be clothed in any garb that even remotely suggests a catering to the personal pleasure of any member of the Executive.”

The JCC asserted that the Chief Justice ought not to be subject to a probationary period since he/she ought not to have been considered for appointment in the first place unless his/her suitability was unquestionably established.

It said the insecurity of tenure conveyed by “acting until the Governor General is further advised” does not aid in the strengthening of the office, especially at a time when the country continues to demonstrate a deplorable lack of respect for the important symbols of national life.

According to the JCC, the Prime Minister ought to steer clear of bringing this high office into unnecessary dispute.

“We therefore caution the Prime Minister against a cavalier dismissal of the tenets of precedence and tradition which form the bedrock of any stable society and urge him to remedy this situation by taking steps to appoint the Chief Justice without further delay,” said the JCC.

On Friday, Prime Minister Holness responded to the growing criticism including from the parliamentary opposition and the Jamaican Bar Association. According to Holness, he was from a different age and his way of thinking may not always coincide with those who hold traditional views.

"I was encouraged by the very people who are critical now to take an unconventional view. I followed that view," said Holness. He was speaking at a press briefing at the Denham Town Restorative Justice Centre, following a tour of the Zone of Special Operations (ZOSO) in the West Kingston community.

The Prime Minister said: "I have never met the person who I've selected as the chief justice. I've never had the opportunity to have a conversation with him, I can safely say I do not know him. I selected someone based upon what is presented on paper as his resume and what I've researched as his work and what I have consulted with his peers. It is indeed a break from the traditional and conventional way in which this was done. I am certain that the chief justice understands that I am a person who believes in systems of accountability."