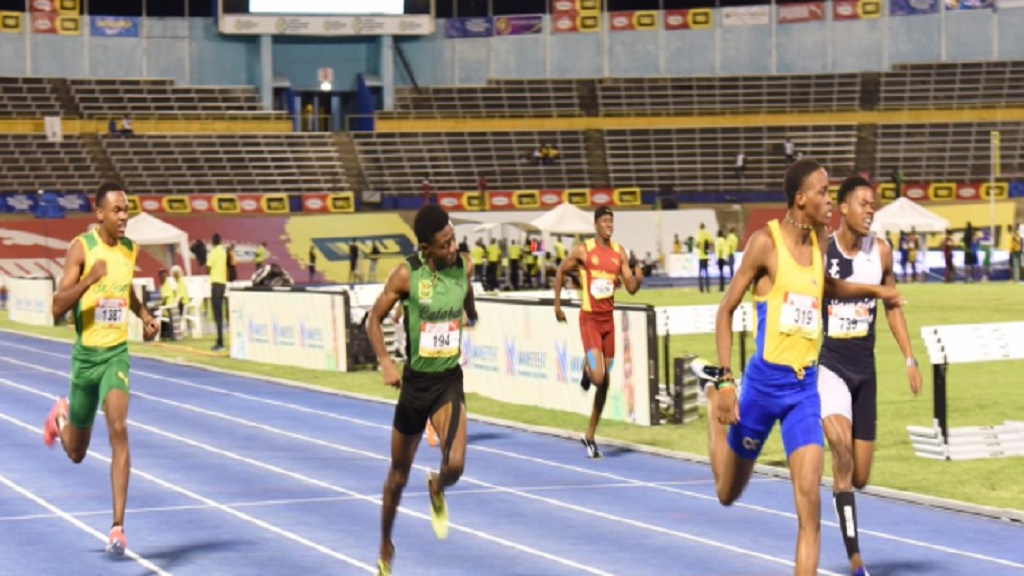 Clarendon College's Rajay Morris wins Heat 1 of the Boys' Class 1 200m semi-finals at the ISSA/GraceKennedy Boys’ and Girls’ Athletics Championships at the National Stadium on Thursday. Ryiem Robertson of Jamaica College gets the better of Calabar High's Christopher Taylor for second place.

Gold medal favourite Christopher Taylor of seven-time defending champions Calabar High survived a few anxious to book his spot into the final of the Boys' Class 1 200m on day three of the 2019 ISSA/GraceKennedy Boys’ and Girls’ Athletics Championships at the National Stadium.

Taylor looked very uncomfortable in running and could only manage third place in his semi-final heat on Thursday.

The top sprinter was collared by Clarendon College’s Rajay Morris, who pulled away from the defending champion down the stretch to win in 20.77 seconds.

Taylor meanwhile, battled in vain to hold on to second place but was overtaken on the line by a fast-finishing Ryiem Robertson of Jamaica College.

Both Taylor and Robertson were given the same time of 20.98. However,  Taylor was awarded third place and had to wait on the other two semi-finals before his spot in the final was confirmed.

Wolmer’s Boys' Xavier Nairne won his heat in 20.81, a relaxed Antonio Watson of Petersfield cruised into second place and finished in 21.00.

Andre Bent was third in 21.31, which meant that three athletes from the final heat would have to run faster than 20.98 to eliminate the defending champion.

Kingston College’s Jevaughn Powell did his best to accommodate his school’s supporters racing to the line in 20.85. However,  JC's Michali Everett  (21.18) and Petersfield's Kevon Stone (21.22) were simply not fast enough to eliminate Taylor who lived to fight another day.

The day belonged to Pinnock as KC, Rusea's take early lead at Champs