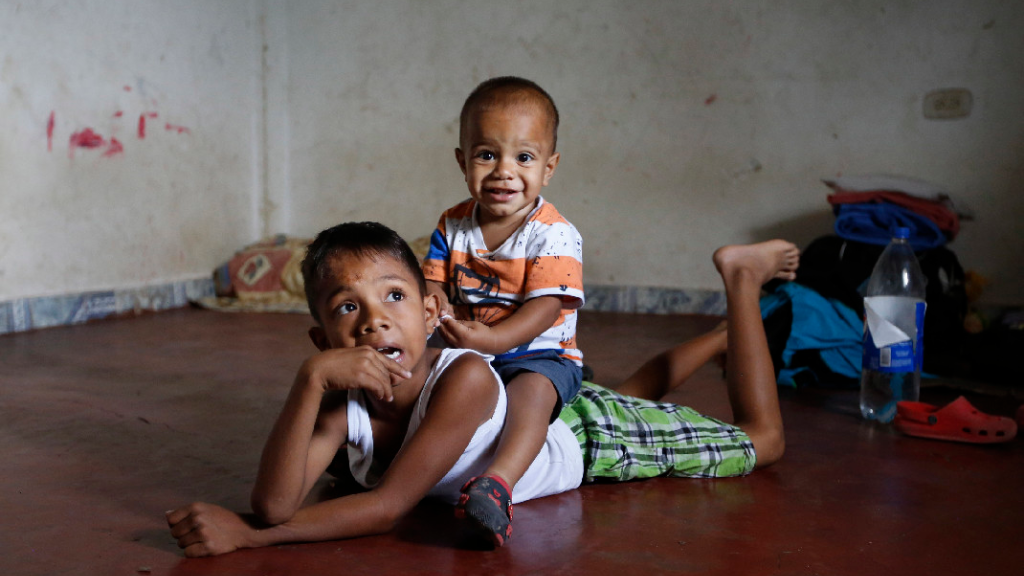 In this June 27, 2018 photo, Venezuelan migrant children play on the floor of the unfurnished home their parents are renting and sharing for the last two years with another Venezuelan family in Cucuta, Colombia. Venezuelan migrant families that get stuck in Cucuta, a city with one of Colombia's highest unemployment rates in a region that is a hotbed for drug-related violence, often live 10 to a room in tenements with no beds that rent for $17 a week. (AP Photo/Fernando Vergara)

Venezuelan children are increasingly becoming victims of abuse, malnutrition and even abandonment as thousands flee their country's collapsing economy and autocratic government.

On a recent humid evening in the Colombian border city of Cucuta, a Venezuelan woman wrapped her newborn daughter in a pale yellow blanket and left her with a note alongside a car parked near a stadium hosting a high school field day.

"I don't have the means to take care of her," she wrote on graph paper with a pink border of hearts, paw prints and flowers. "She is four days old and her name is Angela."

About an hour later, another woman, her son and a teenage friend emerged from the stadium and heard the baby crying. They traced the faint wail to the car, just as the driver was starting the engine, coming dangerously close to striking the child.

The woman picked the girl up from the ground, later telling police she could see ants climbing on the newborn's body.

Officers arrived within minutes and took the child to a nearby hospital.

Doctors found the child's umbilical cord had been well cut and clamped, indicating she had been born in a hospital.

But aside from the note, which said the mother was Venezuelan, there was nothing to identify the girl, who begins life in the midst of an exodus from Venezuela in which children are increasingly becoming the victims of abuse, malnutrition and even abandonment.

"It's sad the mother took this decision," said Maj. Amaury Aguilera, the officer overseeing the investigation. "To just simply, so coldly, abandon her."

As Venezuelans flee their country's collapsing economy and an autocratic government in rising numbers, a grim toll is becoming evident among the youngest arrivals in Colombia: Children are sleeping on the streets, suffering from hunger and untreated infections, and sometimes being lured into sex work.

More than 500 Venezuelan children have been taken into custody in Colombia, according to government documents.

Police in Cucuta regularly turn at least one or two children a day over to the nation's child welfare agency, where many are then placed in foster homes.

At the city's biggest soup kitchen, some parents have even tried to give their children away.

Rosalba Navarro, a sister with Cucuta's Roman Catholic archdiocese, says mothers on several occasions have begged her: "Please take them. I don't have anywhere to keep them."

Over 1 million Venezuelans have fled across the porous border into Colombia in less than two years, many of them young children.

A recent census found that of the estimated 442,500 Venezuelan migrants living in Colombia illegally, about a quarter are minors - 10 percent are 5 years old or younger.

The escalating influx is putting strain on an already stretched child welfare system in Colombia, where decades of war, poverty and social strife have rendered countless children the victims of abandonment, sex abuse and recruitment by illegal armed groups.

Many Venezuelans have made long journeys by foot and bus when they reach Cucuta, a mountainous city where their homeland can easily be seen from its hilltops. They often have little more than a dollar in their pockets, if that, and several mouths to feed.

The result, police and welfare advocates say, has been a surge in the number of distressed parents lugging children along Cucuta's smoggy, congested streets as they try to sell root beer or candy to pay for a roof over their heads.

On a recent evening, Cucuta police found 17-year-old Eliusmar Guerrero selling lollipops with her 18-month-old daughter. Guerrero said she and her husband had been unable to pay for their room in an apartment for the last three days. With no relatives in Colombia to help her care for the child, she said she was left with no choice but to go out in the streets hoping to sell a few candies with her baby in tow.

"We are going hungry here," she said, balancing her smiling, seemingly oblivious daughter on one hip before the glare of a flashing police light.

As officers transported Guerrero and her daughter to Cucuta's child welfare offices, she embraced her daughter and began to weep.

"I'm afraid they'll take her from me," she said.

In contrast to the United States, where more than 2,000 children were separated from their parents at the border with Mexico under the Trump administration's zero-tolerance policy, Colombian officials say they are trying to keep newly arrived migrant families together while boosting the number of foster families available to step in at a moment's notice when needed.

Authorities decided to place Guerrero and her baby together in a foster home.

Figures provided by the government show 502 Venezuelan children have been taken into custody since the start of 2017.

Ninety-nine of them were determined to be the victims of negligence, while 80 had suffered sexual abuse.

Dozens of others were determined to be homeless, physically abused or in a state of malnutrition by the time they reached child welfare officials.

Still, for every child Colombian authorities take in, many more are out of view living in equally or more precarious conditions.

Police in Cucuta said they had found only one instance of a minor involved in sex work, but in just one visit to a park known as a hub for prostitution, The Associated Press spoke with three Venezuelan girls who described starting to work as prostitutes there at ages 15 and 16.

"I stood at that pole and began to work," one girl, now 18, said, pointing to a street lamp along the edge of the small, concrete city park.

Speaking on condition of anonymity in fear of retribution, the teen said she started sex work two years ago after migrating to Colombia and being unable to earn any money.

She described the work as "revolting" and said she manages to mask her pain by taking "cripy," a modified form of marijuana that contains higher levels of THC.

"Can't you see it in my eyes?" she asked, her dark brown eyes fixed in a numb haze.

Cucuta is a city with one of Colombia's highest unemployment rates in a region that is a hotbed for drug-related violence, and Venezuelan families that get stuck here often live 10 to a room in tenements with no beds that rent for 17 US dollars a week.

A block from the church soup kitchen, 5-year-old Daniel Villegas shares a room with several extended relatives, his parents, and three siblings, including one with microcephaly.

His father smuggles Venezuelan-made root beer across the border and sells crates for a little over a dollar each, giving the family barely enough money for food.

Daniel, a thin, soft-spoken boy who wants to be a fisherman when he grows up, sleeps on a dirty mattress with two other boys.

He said he dreams of the soup kitchen, where he gets to eat meat, a delicacy he went without for months in Venezuela.

"It bothers me," he said shyly of the uncomfortable sleeping conditions. Then, pointing at his back he said, "This hurts."

Along the banks of the muddy Tachira River dividing Colombia and Venezuela, conditions for children among Venezuela's Yukpa indigenous group are even worse: many have lice and distended bellies from malnutrition or parasites. Indigenous groups in both countries have long gone neglected.

Yet even while their children survive off meagre helpings of potatoes cooked over rustic fires, Yukpa leader Dionisio Finol said they are better off in Colombia than in Venezuela.

"At least here they can eat," he said.

Some Venezuelan families, anxious to leave Cucuta for more prosperous cities in Colombia or other parts of Latin America but without the money to buy a bus ticket, are now choosing to walk to their next destination, children alongside them.

If they are lucky, they are able to hitch rides with strangers for much of the way.

"I'm willing to walk for three, four, five years," said Darwin Zapata, who departed from Cucuta with his 12-year-old son in hopes of reaching Peru, 1,500 miles (2,400 kilometres) to the south.

He fled to Colombia after losing his job in Venezuela and being briefly kidnapped.

Both wheeled suitcases along the side of a highway on a recent morning.

The most desperate are willing to give up their children entirely.

Though police said the case of newborn Angela was their first, child welfare, church and social workers said there have been others.

One hospital social worker recalled a young mother of four who took her 5-month-old daughter to the hospital for malnutrition and decided to leave her there, telling staff she had no means of taking care of her.

"She came back three times," Andrea Portilla, the social worker, recalled. "Deep down, she did not want to abandon her. But the situation forced her to."

In the case of baby Angela, officers seized on the little information available to search newborn registries at every nearby hospital. In her note, Angela's mother said only that she was Venezuelan and signed her name Catalina. Investigators now believe both names were likely made up. They couldn't find any woman named Catalina who had given birth to a daughter named Angela in the previous week.

"She probably knew that was the first thing we'd go looking for," Aguilera said.

When a child is found abandoned in Colombia, officials are legally obligated to make every effort to find a relative in Colombia or Venezuela who would be able to take care of her, a task made even more complicated as relations between the Andean nations grow testy.

As police continue their investigation, the little girl with a thick nest of black hair is being swaddled by what Colombia calls a "substitute mother."

In embattled Venezuela, beauty offers ladder out of poverty