Chelsea's Willian cautious about resuming even without fans 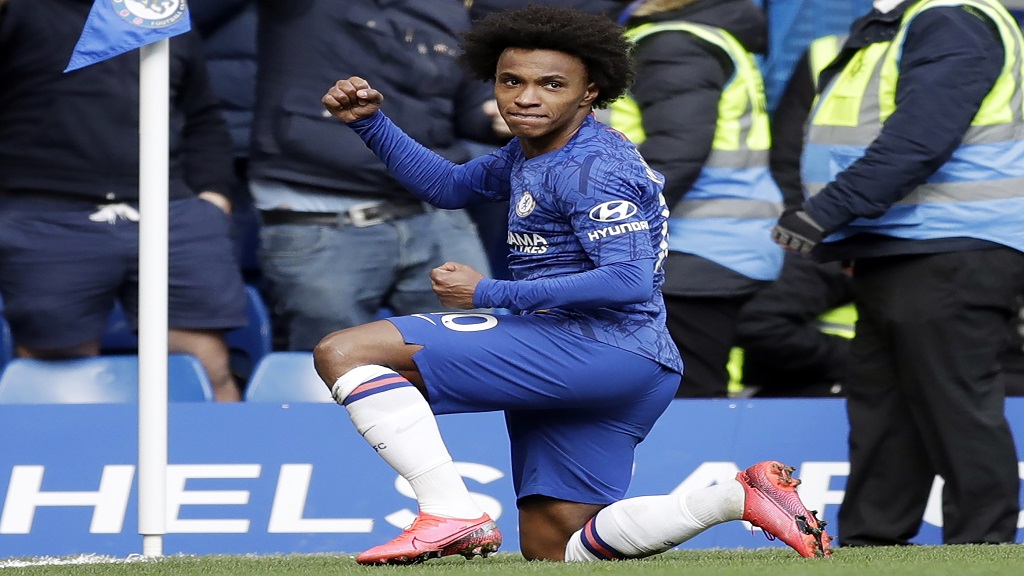 Chelsea winger Willian is relishing the Premier League resuming, with some reservations during the coronavirus pandemic.

“If we restart playing without fans but there’s contact on the pitch and maybe we can spread the virus between us,” Willian said in a video interview. “It’s not a bad idea but they have to know very carefully what’s going to happen. Maybe a player can have the virus and we play against each other, you know?

"I play against someone and I get the virus then I go home after the game to stay with my family and pass the virus to my wife or daughters. So we have to be careful about that.”

It was teammate Callum Hudson-Odoi testing positive for the coronavirus on March 11 that contributed to the Premier League’s decision to halt a season that is suspended indefinitely. Chelsea's last game was three days earlier against Everton.

“We shook hands and hugged each other,” Willian said. “So after that when he tested positive for the coronavirus I think everyone was worried about it. But none of us felt any symptoms.”

Still, Willian, along with the rest of the squad, had to go into self-isolation in his London apartment before eventually flying out to join his wife and children who had returned to Brazil.

Willian remains in Sao Paulo waiting to discover when training can resume in England. Extending the season far beyond its expected end-point in mid-May has additional complications as his Chelsea contract expires, like so many across football leagues, on June 30.

While the Premier League has been on hold during the pandemic, players have come under pressure to accept pay cuts — particularly to protect the jobs of non-playing staff at clubs.

Premier League clubs agreed collectively that squads should have salaries reduced by 30% as revenue streams have dried up but the players’ union could not reach an agreement.

Some Premier League players have collectively promoted fundraising for charities linked to the National Health Service.

Britain’s nationwide lockdown was extended for at least another three weeks on Thursday with officials believing the outbreak is reaching its peak. As of Thursday, 13,729 people had died in British hospitals after testing positive for the coronavirus, an increase of 861 from a day earlier.

While rising quickly, the number of confirmed coronavirus cases in Brazil is still relatively low in relation to the country’s massive population of 211 million, which is more than three times the size of Britain. There have been almost 2,000 deaths and the peak is not expected until May.

“We see what’s happening in Europe, especially in Spain, France and also England, where unfortunately there have been a lot of deaths due to COVID-19,” Willian said. “So I’m worried about Brazil as it’s an extensive country. It’s also a populous country. Hopefully, people will respect the quarantine rules because we don’t want to see here what’s taking place in Europe.”

Brazilian President Jair Bolsonaro’s dismissive stance over the pandemic - characterising the virus as a “little flu” and saying shutting down the economy would cause more damage than confining only high-risk Brazilians - has angered many health experts. Bolsonaro on Thursday fired health minister Luiz Henrique Mandetta, who had promoted broad isolation measures enacted by state governors,

“The government and its health professionals are taking proper care ,” Willian said, not discussing politics. “I think that was the mistake in Europe which cost many lives. When they understood the severity of the situation many people had the virus, then it was too late.

“I believe Brazil are controlling the situation and trying to take the right measures to avoid the spread of the virus. Hopefully, it will work fine.”

For most people, the coronavirus causes mild or moderate symptoms, such as fever and cough that clear up in two to three weeks. For some, especially older adults and people with existing health problems, it can cause more severe illness, including pneumonia and death.

Bundesliga aim to restart in May without fans hit by order