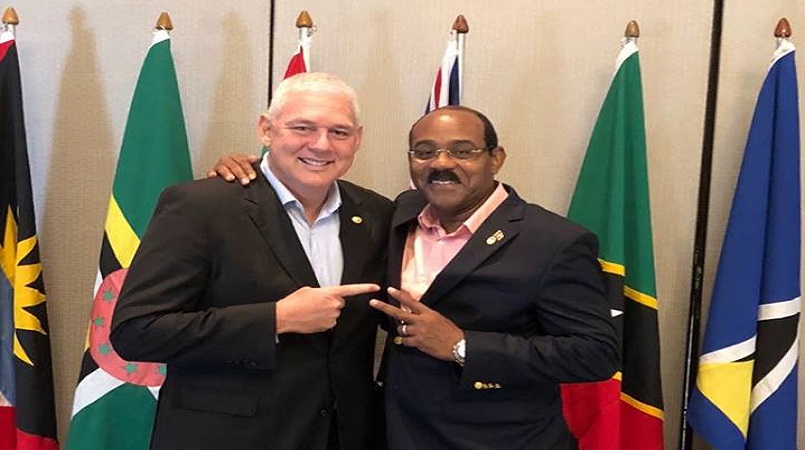 St Lucia's Prime Minister Allen Chastanet has placed his country's agenda above all in the face of criticisms from colleagues in the Caribbean Community (CARICOM) over his meeting with US President Donald Trump last Friday in Florida.

Telling reporters today that he will not respond to criticisms from Antigua’s Prime Minister Gaston Browne and that of Saint Vincent and the Grenadines Dr Ralph Gonsalves and others, Chastanet made it clear he was elected by the people of Saint Lucia, clearly hinting his election to the position of prime minister had nothing to do with his detractors in CARICOM.

“In addition to that, that’s my largest diaspora,” he added noting that it’s the United States of America that offers him and Saint Lucians the greatest opportunity for growth.

“So, if I am invited to put forth Saint Lucia’s agenda, I will do so but I have always been extremely respectful and will continue to be respectful of CARICOM’s positions,” Chastanet said.

Both Browne and Gonsalves criticized the five Caribbean leaders who met with Trump with Gonsalves calling the meeting “troubling” and Browne describing the five leaders as “weak-minded”.

He said the meeting with Trump covered security in the region particularly that of Saint Lucia. “I think we are making some substantial inroads in making sure that we can get the assistance that is required in helping us secure Saint Lucia,” Chastanet said.

Also discussed, Chastanet said, were solutions to Saint Lucians not having to go all the way to Barbados to get US Visas and applying closer to home for such visas.

He spoke of discussions with Trump in which the latter will turn an old agency into an investment organization with $70 billion in its coffers, an initiative that would be completed in 60 days with a team coming to Saint Lucia within the next 90 days in order to look into some investment opportunities “that we currently have here”.

Prime Minister Chastanet also said that discussions with President Trump focused on trade as well with talks on having a deal which enables agricultural produce to enter the United States being renewed.

As to the Leahy Law, IMPACS and their implications to certain members of the police force and the police force in general, Chastanet said discussions with Trump did not speak specifically to that, however his government has been having dialogues with other US departments and agencies on those matters.

“As we were in a group it would have been difficult to bring up something as specific as the Leahy Law but I have to say to you that on the Leahy we have been having discussions with the US and we are going to be getting assistance now from the state of Florida with our police. The Leahy law applies to the federation but not necessarily to the states,” Chastanet said.