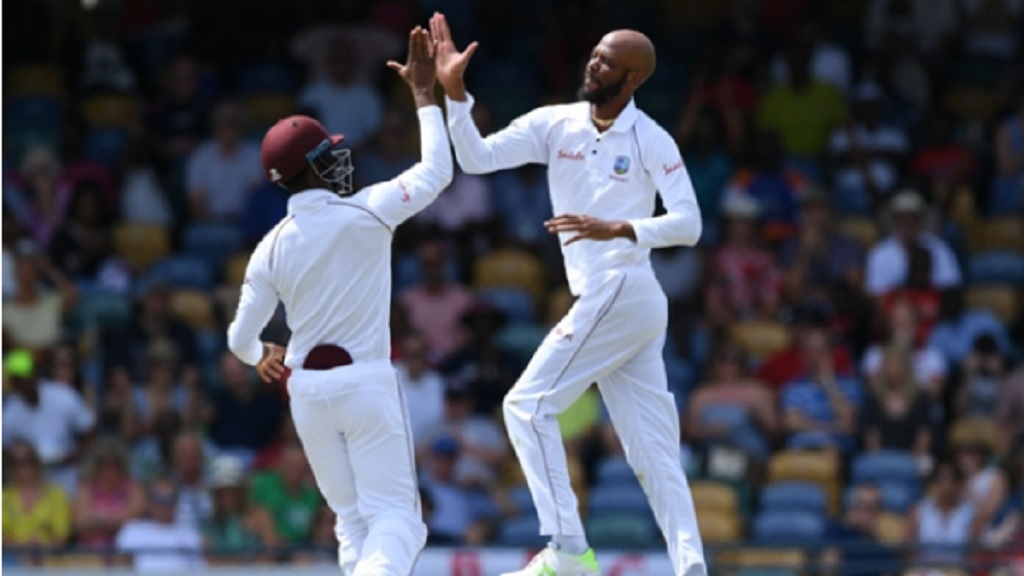 Roston Chase took the sixth-best Test figures by a West Indies bowler to seal a crushing 381-run victory over a sorry England on day four of the first Test at the Kensington Oval on Saturday.

All-rounder Chase claimed an astonishing 8-60 in Barbados, where the tourists folded from 134-1 to 246 all out after Rory Burns made his highest Test score of 84.

After being blown away for only 77 by the Windies paceman in a pitiful first innings in Bridgetown, England were undone by the spin of Chase on Saturday.

Chase's second five-wicket Test haul was the best by a West Indies spinner against England in the Caribbean and secured a hammering which is third on the list of his side's most emphatic in Tests by run margin.

Burns struck 15 boundaries in an assured knock and Ben Stokes (34) dug in, but Joe Root's side lost six wickets for only 31 runs as the Windies emphatically secured a 1-0 lead in the three-match series.

A confident Burns continued to bat with fluency after England resumed on 56 without loss, bringing up his second Test half-century by clipping Shannon Gabriel for a couple.

England moved past their embarrassing first-innings total before a struggling Keaton Jennings (14) edged to Jason Holder, flashing at Alzarri Joseph's fifth delivery of the day.

Jonny Bairstow cut a short delivery from Kemar Roach for four and Burns continued to look comfortable, driving with conviction and punishing the Windies bowlers when they strayed onto his pads.

The opener was denied a maiden Test hundred when he fell on the stroke of lunch, though, missing a straight, flighted delivery from Chase which crashed into his off stump.

Root had a life after England returned from lunch on 134-2, getting himself into a tangle when Gabriel dug one in short and gloving to Holder at first slip before he was called back, as the paceman over-stepped.

Bairstow (30) survived a review for leg before, but was strangled down the leg side in next over from Gabriel - Shai Hope taking the catch with Shane Dowrich unable to keep due to a back injury.

Stokes successfully reviewed after being given out leg before when he got an inside edge to a ball from Chase, but Root fell in tame fashion, edging an innocuous delivery from the spinner to Darren Bravo at first slip.

Jos Buttler struck Roach for back-to-back boundaries and Stokes used his feet well to launch Chase for four over mid-on before striking the spinner for six down the ground later in the over.

An inspired Chase got rid of Stokes (34) and Moeen Ali - who bagged a pair after playing a poor shot - just before tea and the tweaker had five wickets when John Campbell took a brilliant diving catch at short midwicket to end Buttler's knock.

It was all going Chase's way, Shimron Hetmyer pouching a catch at short leg he knew little about and Kraigg Brathwaite taking a stunner on the boundary before Sam Curran was stumped charging the spinner to end a one-sided match.

West Indies bowl out England for 77