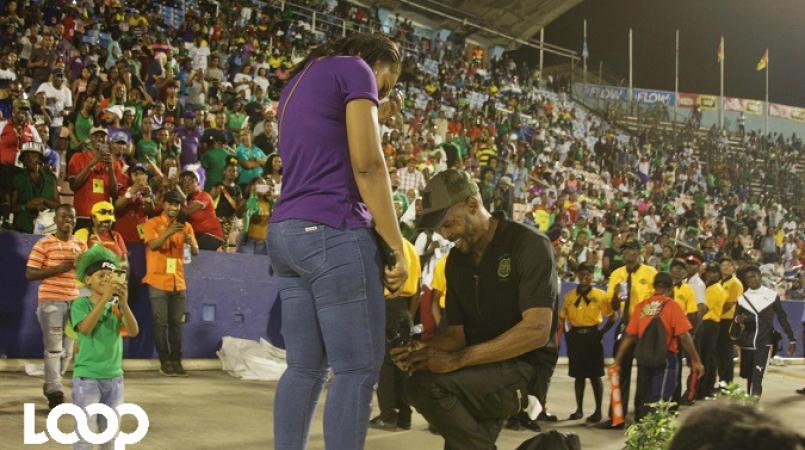 Anthony Shepherd made up his mind that he was going to marry his lover of 14 years, Anecia Spence. Their relationship had borne a seven-year-old son and he was ready to say "I do".

There was no better place for him to ask for her hand in marriage than at the greatest sport event in Jamaica, the annual Boys' And Girls' Championships, Shepherd thought.

In front of more than 30,000 track and field fans at the National Stadium Saturday night, Shepherd popped the question to Spence over the speakers, after watching Calabar, the team he supports, win the boys’ high school athletic championship.

A businessman who lives in Miami, Florida, Shepherd visits Jamaica each year for ‘Champs’ and believed it was just the appropriate time and place to propose to Spence – who lives in Jamaica.

"I come to Champs every year. I participated in both Champs and Gibson Relays and I thought this was the ultimate thing for me to do in front of this audience," Shepherd told Loop News reporter Job Nelson, after his proposal, which Spence accepted.

"She had no idea about it and was completely surprised," he added excitedly.

Shepherd said he has lived in Florida for the past 20 years.  He met Spence, a teacher living in Negril, on one of his visiting trips to the island 14 years ago, and they have remained committed to each other since.

"I live in Miami and she lives in Jamaica. Hopefully, we will live together soon," Shepherd said.

Shepherd said he participated at ‘Champs’ and Gibson Relays while competing for his alma mater Dinthill Technical High School.  He, however, cheers for Calabar High.