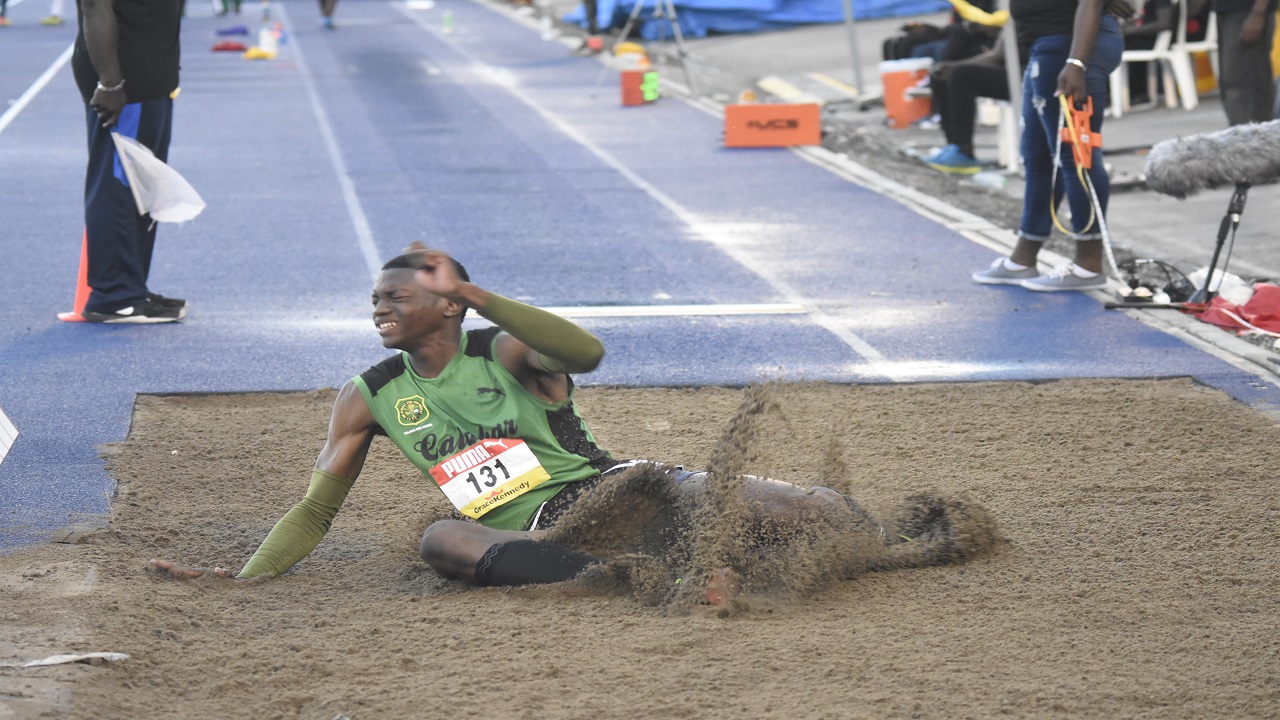 At the half-way stage of Thursday's third day, the Red Hills-based school are well represented in finals when compared to its main rival for championship honours, Kingston College (KC).

In the 400m hurdles, Calabar have three athletes in the finals scheduled to Friday compared to KC's one.

KC only entered Shanthamoi Brown in the Boys' Class 2 400m hurdles and he won his preliminary round heat in 54.62 seconds to advance with the second fastest qualifying time to the final.

Calabar will be represented by Andre Leslie (55.11) and Dean Clarke (54.53) who have the fourth and sixth fastest qualifying times.

KC also entered a single athlete - Andre Leslie - in the Boys' Class 1 400m hurdles and he finished third in his preliminary round heat in 58.35, not fast enough to get him into the medal round.

Calabar High also dominated action the the field. In the Boys' Class 2 shot put, the Red Hills-based school will enter the final, which is scheduled for later this afternoon, with the top two throwers following the opening round earlier.

Daniel Bayeshea (14.66m) and Zackery Dillon (14.79) came away as the leading throwers following the opening round.

In the girls' championship, Edwin Allen are also beginning to take charge.

In the Girls' 400m hurdles open, Edwin Allen are well represented in the final with two athletes compared to  Hydel High and Holmwood Technical, with one each.

Hydel High's Shiann Salmon won heat 2 of the preliminaries in 58.83 seconds to qualify with the fastest time. Edwin Allen High's Moisha Barnes enters the final with a 59.62 clocking for the second fastest time.

In the Girls' Class 2 discus throw, Edwin Allen have two qualifiers in Friday's final, while their main rival Holmwood Technical will be represented by one athlete.

The top qualifier is Vere Technical High's Marie Forbes with a preliminary round throw of 40.17, just ahead of Excelsior High's Kimberly Lugg with 39.23m.

Daniella Williams of Edwin Allen has the third best effort of 37.60m, while her teammate Kadine Brown will enter the final with a best throw of 35.89.

Holmwood Technical will be represented by Kenisha Thompson, who achieved 34.74m in the preliminary round.

In the Class 4 high jump final, Hydel High are well represented with two finalists, while Edwin Allen have one qualifier.

Torian Caven (1.55m) of Ardenne, Shackala Henry (1.55) of Hydel High and Excelsior High's Teddyann Arthurs (1.55) are the top three performers from the preliminary round.

Edwin Allen High's Rasheda Samuels will enter the final with 1.50m along with Camperdown's Shanniqua Anderson and Alliah Baker of Hydel.

The final will take place on Friday.

Calabar High and Rusea's High are the early leaders after two finals scored in the boys and girls' section.

KC are on 17 points, eight ahead of third-place St Jago High, which are on nine points. Wolmer's Boys hold down fourth place on eight points, followed by Cornwall College (six), Jamaica College (JC) on five and Excelsior High on four.

After two event scored in the girls' section, Rusea's High have surged to 16 points to hold a seven-point lead over St Jago High and Immaculate Conception High, which are joint second on nine points. Four-time defending  champions Edwin Allen and their main rivals for title honours Holmwood Technical are joint fourth with eight points, followed by Vere Technical (seven), Excelsior and Hydel High (six each) and Petersfield High (five).