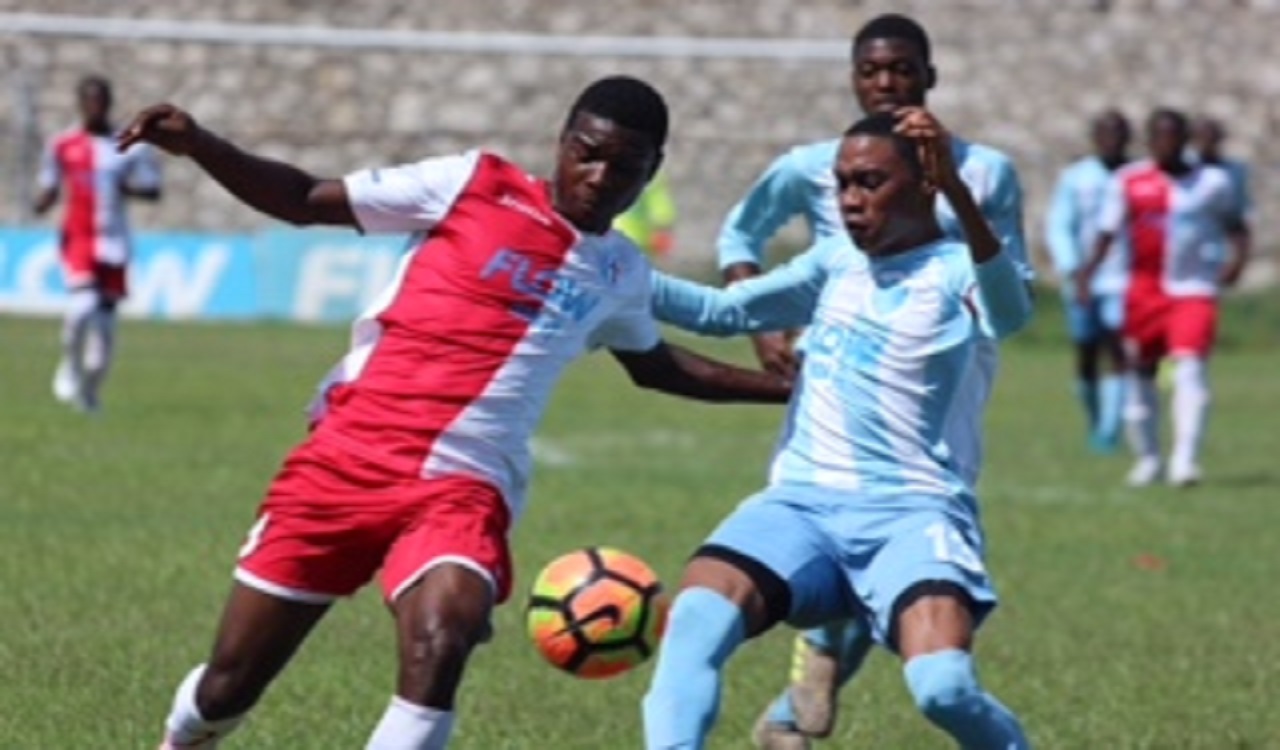 Action from the ISSA/FLOW Manning Cup quarter-final game between St Catherine High and St George's High at Prison Oval in Spanish Town on Tuesday. The game ended in a goalless draw.

Defending champions Jamaica College (JC) became the first school to qualify for the semi-finals of the 2017 ISSA/FLOW Manning Cup competition when they defeated Calabar High 1-0, on Match Day 2 of quarter-final action.

The game was played at the Constant Spring field and was the first match of a double-header at the venue.

As a result of the victory, JC moved to maximum six points in Group H, which ensured that they will finish in the top two in the group.

The quarter-final round comprises two groups and the top two from each will play in the semi-finals.

JC had defeated Bridgeport High 2-0 in their first game last Saturday and will end their quarter-final schedule against Kingston College (KC) on Saturday.

The game was the first match of a double-header at the venue.

The two other Group H teams - KC (one point) and Bridgeport High (without a point) - are now contesting the second game at Prison Oval.

The first half of the opening match at Prison Oval saw both teams playing the watch and wait game. However,  it was St George’s College, which looked more intent on getting on the scoresheet.

The 'Light Blues' thought they had a penalty in the 22nd minute when St Catherine High's Maleek Miller seemed to have handled the ball in the area following an errant clearance.

Neither team was able to make inroads into the attacking third and the half ended 0-0.

The second half began just as the first, with long balls and erratic clearance being the order of the day.

St George's College managed to eke out a close opportunity in the 70th minute as a quickly taken corner surprised the St Catherine defense. However,  Jahmal Pusey’s shot crashed into the crossbar with goalkeeper Rakeen Henry beaten.

St Catherine hit back immediately through Tevaun Taylor, who picked up a right sided cross but his shot ricochet off a defender for a corner.

Patrick said, “we didn’t have our main forward in the team today and the youngsters that we put out got one chance, which he didn’t take but all in all we will take a point against this St. George’s team.”

He said, “we must give credit to both teams defensive unit , we didn’t score but we will put everything into our final game come Saturday.”

The result means that both teams have moved to two points each from their two games.

On Saturday, St Catherine High had battled to a 1-1 draw with St Andrew Technical High School (STATHS), while St George's College and Holy Trinity also played to a 1-1 draw.

MANNING CUP: JC off to perfect start in quarter-final round